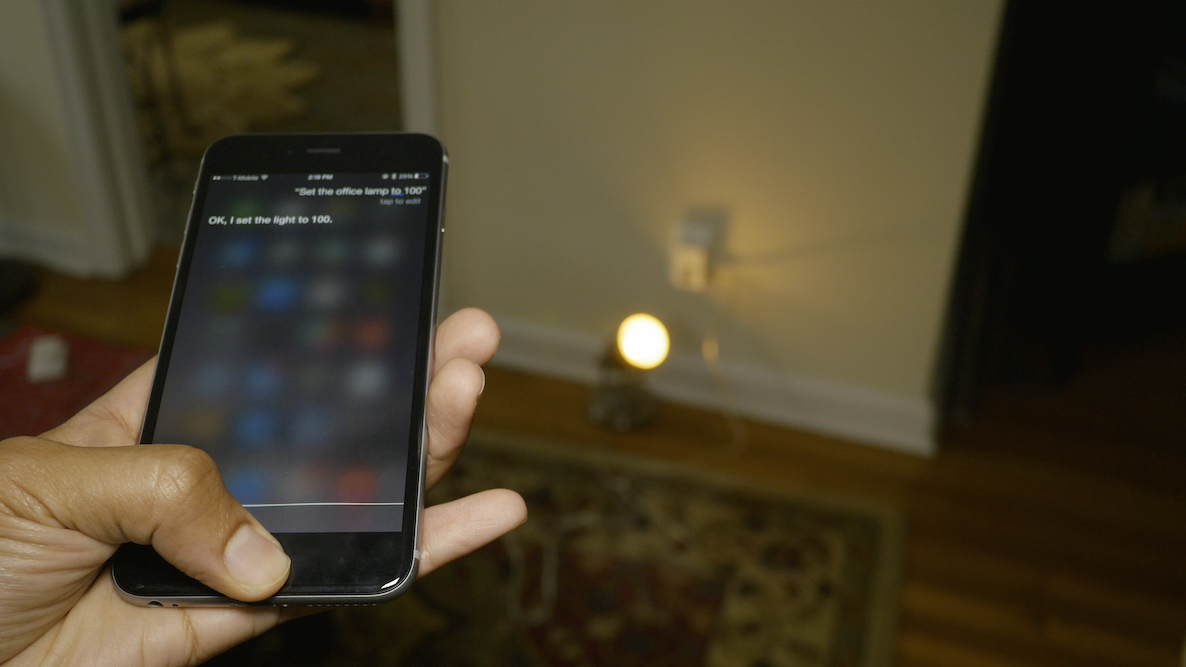 A couple of hours ago, I got my first real hands-on experience with HomeKit—the connected smart home framework that Apple announced at WWDC 2014. A year later, and some of the very first HomeKit enabled products are now landing on store shelves.

The folks over at Lutron were nice enough to send us the Caséta Wireless Smart Lighting Dimmer Kit ($229.95 on Amazon). This kit comes with a Smart Bridge, two remote controls and two plug-in lamp dimmers. Although the kit in and of itself is interesting, our main interest at iDownloadBlog is with its HomeKit support. With that in mind, this post consists of an unboxing and overview of Lutron’s kit and a walkthrough of the HomeKit configuration, including Siri control.

Want to see how HomeKit works in the real world? Then watch our full video walkthrough for more details.

The full package comes in a medium size box, and contains everything you’ll need to get started with managing your household lamps via HomeKit. Here’s what you’ll find in the box:

You’ll also need to download the free Lutron Caséta Wireless app from the App Store in order to complete the configuration process. 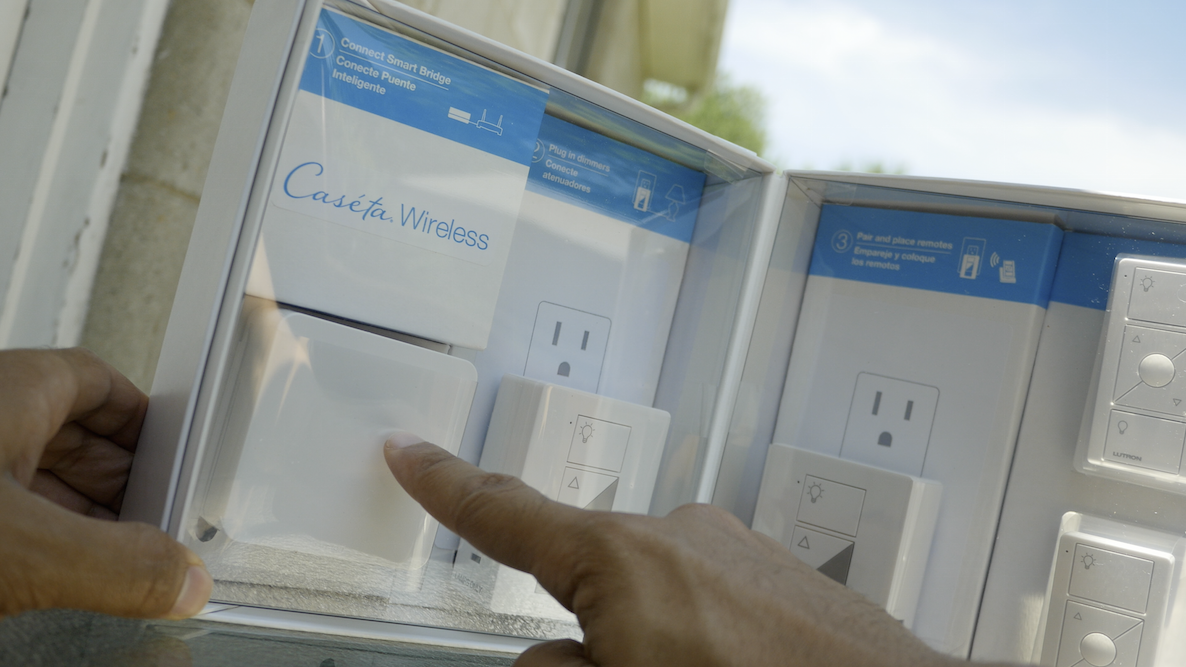 The Caséta kit is like a starter kit, because there are lots of additional smart peripherals that can be added to the network. You can even add a Honeywell or Nest Learning thermostat if you wish to do so.

Set up was relatively easy. The hardest part was creating a login and waiting on the Lutron app to complete the full configuration. In fact, the setup process is so easy that I didn’t even bother with the instructions. Here’s what I did: 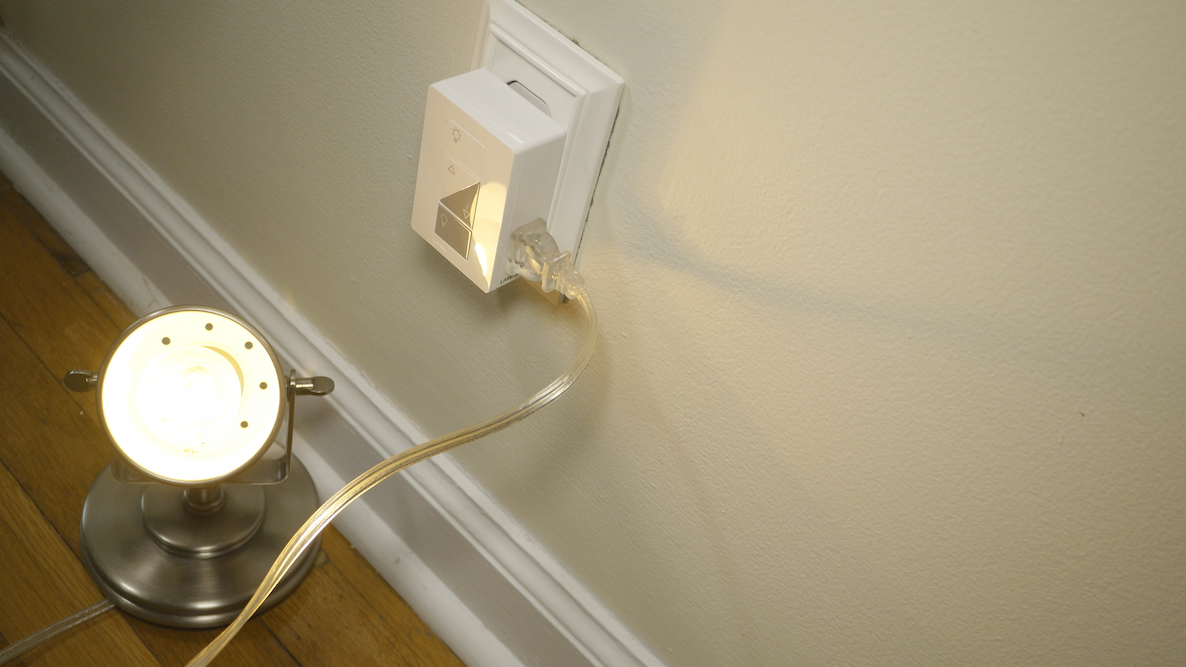 During the app configuration, you’ll need to create a Lutron login, press the button on the Smart Bridge, name your Home, and establish names and links with your smart devices (i.e. plug-in lamp dimmers). Every HomeKit enabled accessory comes with a HomeKit setup code. This unique eight-digit code is used to pair the HomeKit enabled accessory and your iPhone, and you’ll be prompted to enter this code during the setup process.

Testing it all out

Once everything was setup, it was time to test out the HomeKit functionality.  HomeKit allows you to do some really cool things, including:

In the above video walkthrough, I focus on the Siri control. Ever since we first got Siri with the iPhone 4s, people have dreamed about controlling their home with Siri, and have even created hacked workarounds in order to obtain that functionality. But now, HomeKit is a reality, and it works very well. There’s no need for any hacks, workarounds, or anything else like that. If your smart home connected accessory has the designated “Works with Apple HomeKit” sticker, then you’re good to go.

While HomeKit works exceptionally well with no lag or latency, I’m disappointed that I can’t use Siri via my Apple Watch to control my connected devices. I understand that the Apple Watch is a new product, and it’s still evolving, but not to have this functionality built-in from day one is pretty disappointing to me.

When you raise your wrist and say “Hey Siri, turn on my office lamp,” Siri tells you that it can help you by using Handoff on iPhone. You can say the command, and the Apple Watch will recognize it, but it won’t actually do anything until you use Handoff on the paired iPhone.

Smart homes have always been the stuff of dreams and for tinkerers with tons of time on their hands. With HomeKit, a smarter home is now within reach of the everyday man or woman, and it won’t take a ton of time or money to set up something that’s easy to use.

HomeKit may be in its infancy, but I have no doubt that it is an absolute game-changer, and will one day be seen as one of the major catalysts of the smart home’s proliferation in the mainstream.

We’ll be back with more in-depth thoughts on the Caséta Wireless system in a future post. But for now, tell us what you think about HomeKit. Are you planning on trying any HomeKit enabled devices? Sound off in the comments below.