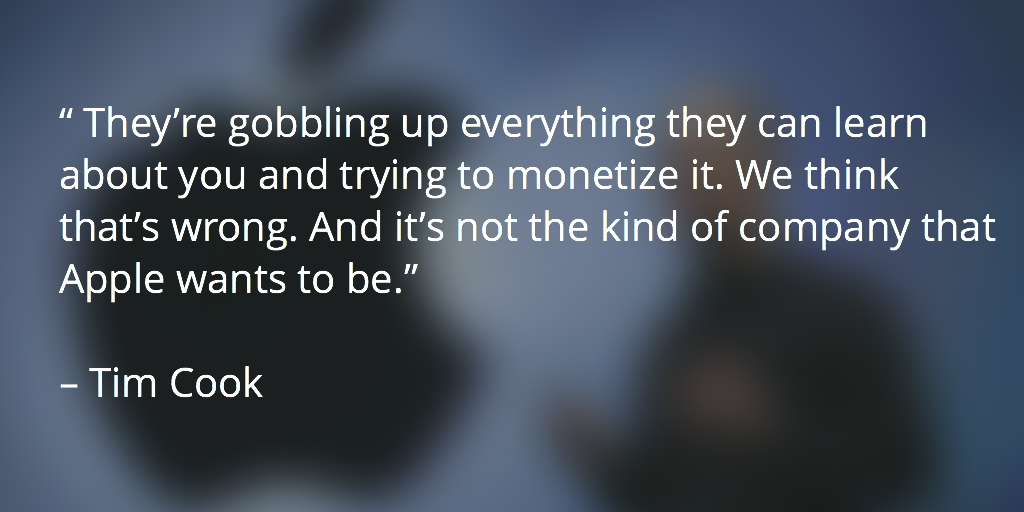 Tim Cook took time out of his busy schedule yesterday to talk about privacy with folks attending EPIC’s Champions of Freedom event in Washington. EPIC, a non-profit research center focused on emerging privacy issues, was honoring the CEO for his superior “corporate leadership.”

Cook addressed attendees via a remote video feed, and spoke about a number of topics regarding privacy, security and what they mean to Apple versus other Silicon Valley tech giants. TechCrunch has a transcription of the speech, and he takes quite a few jabs at Facebook and Google.

“I’m speaking to you from Silicon Valley, where some of the most prominent and successful companies have built their businesses by lulling their customers into complacency about their personal information. They’re gobbling up everything they can learn about you and trying to monetize it. We think that’s wrong. And it’s not the kind of company that Apple wants to be.”

The rhetoric is in line with previous comments made by Tim Cook, who has been touting the fact that Apple isn’t in the business of collecting data for several months now. It depends on hardware sales to make most of it money, while others like Google and Facebook depend on advertising.

“We believe the customer should be in control of their own information. You might like these so-called free services, but we don’t think they’re worth having your email, your search history and now even your family photos data mined and sold off for god knows what advertising purpose. And we think some day, customers will see this for what it is.”

This is a dig specifically at Google, who launched a new cloud-based storage service for photos and videos at its I/O event last week. The company made a splash by announcing that it would include free unlimited storage, but many believe—including Cook, it seems—that it still comes at a cost.

Cook went on to talk about encryption, another hot topic with many Silicon Valley companies who are in an ongoing battle with the government to build a back door into their services for law enforcement agencies. “If you put a key under the mat for the cops, a burglar can find it too,” he quipped.

“Removing encryption tools from our products all together, as some in Washington would like us to do, would only hurt law abiding citizens who rely on us to protect their data. The bad guys will still encrypt, it’s easy to do and readily available. Now, we have a deep respect for law enforcement, and we work together with them in many areas, but on this issue we disagree. So let me be crystal clear — weakening encryption, or taking it away, harms good people that are using it for the right reasons. And ultimately, I believe it has a chilling effect on our First Amendment rights and undermines our country’s founding principles.”

Keep in mind that Tim Cook is, among other things, an Apple salesmen, so these comments should be taken with a certain amount of skepticism. But he’s not far off on Google and Facebook: both have taken heat over user privacy, and both depend on ads for more than 80% of their revenue.