Recent photos and video depicting an Apple Watch Edition being unboxed provide an interesting insight into engineering that went into the creation of force sensing on the wrist-worn device, with details that go well beyond Apple’s rather scarce description on the Technology section of the Apple Watch mini-site.

As you know, not only does the Apple Watch display respond to touch-based gestures like tapping and swiping, it also uses Force Touch technology to respond to the pressure of your finger.

Now, gold Apple Watch Editions ship with a rather informative booklet that mostly deals with Apple’s manufacturing process. In addition, this booklet sheds more light on the implementation of Force Touch technology and other hardware features of the devices such as sapphire screen protection, Apple’s smallest speaker yet and more.

The official Apple Watch promotional video taught us that Force Touch uses “tiny electrodes around the display recognize the difference between a tap and a press.”

“The challenges of navigating a small display required Apple to think beyond the traditional two-dimensional Multi-Touch experience,” reads the opening paragraph of the Apple Watch Edition booklet.

“So as well as sensing touch, the Apple Watch display also senses force—quite literally adding a new dimension to the user interface”.

But we knew that already.

What we didn’t quite know was that Force Touch technology uses “a multilayer sensor that lies between the front crystal and the watch housing”.

Several layers of polyimide, copper electrodes, silicone and adhesive are molded into ultra-thin sheets that serve as a capacitor. This capacitor is so sensitive, it can measure deflections of less than 1 micron.

For those wondering, a micron is one-millionth of a meter.

The force sensor is encapsulated in a water resistant gasket that protects the internal components. “And to make Force Touch absolutely precise, every Apple Watch display is individually calibrated,” Apple explains. 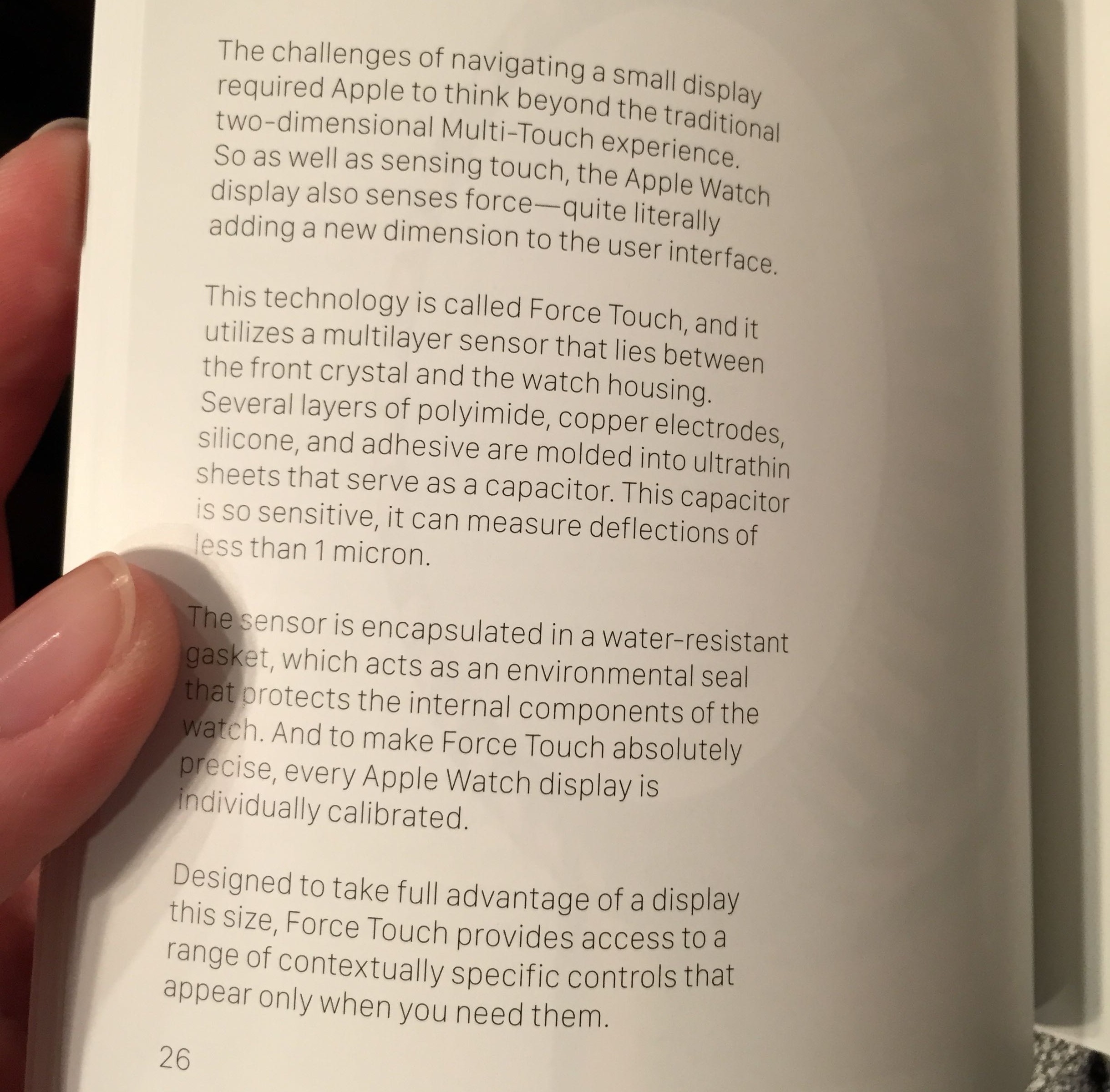 By comparison, this is the pretty uninformative Force Touch description from the Apple Watch Technology webpage:

In addition to recognizing touch, Apple Watch senses force, adding a new dimension to the user interface. Force Touch uses tiny electrodes around the flexible Retina display to distinguish between a light tap and a deep press, and trigger instant access to a range of contextually specific controls.

With Force Touch, pressing firmly on the screen brings up additional controls in apps like Messages, Music, and Calendar. It also lets you select different watch faces, pause or end a workout, search an address in Maps, and more. Force Touch is the most significant new sensing capability since Multi‑Touch.

The booklet provides a number of other tidbits related to key hardware features of the Apple Watch. Here are a few notable excerpts. 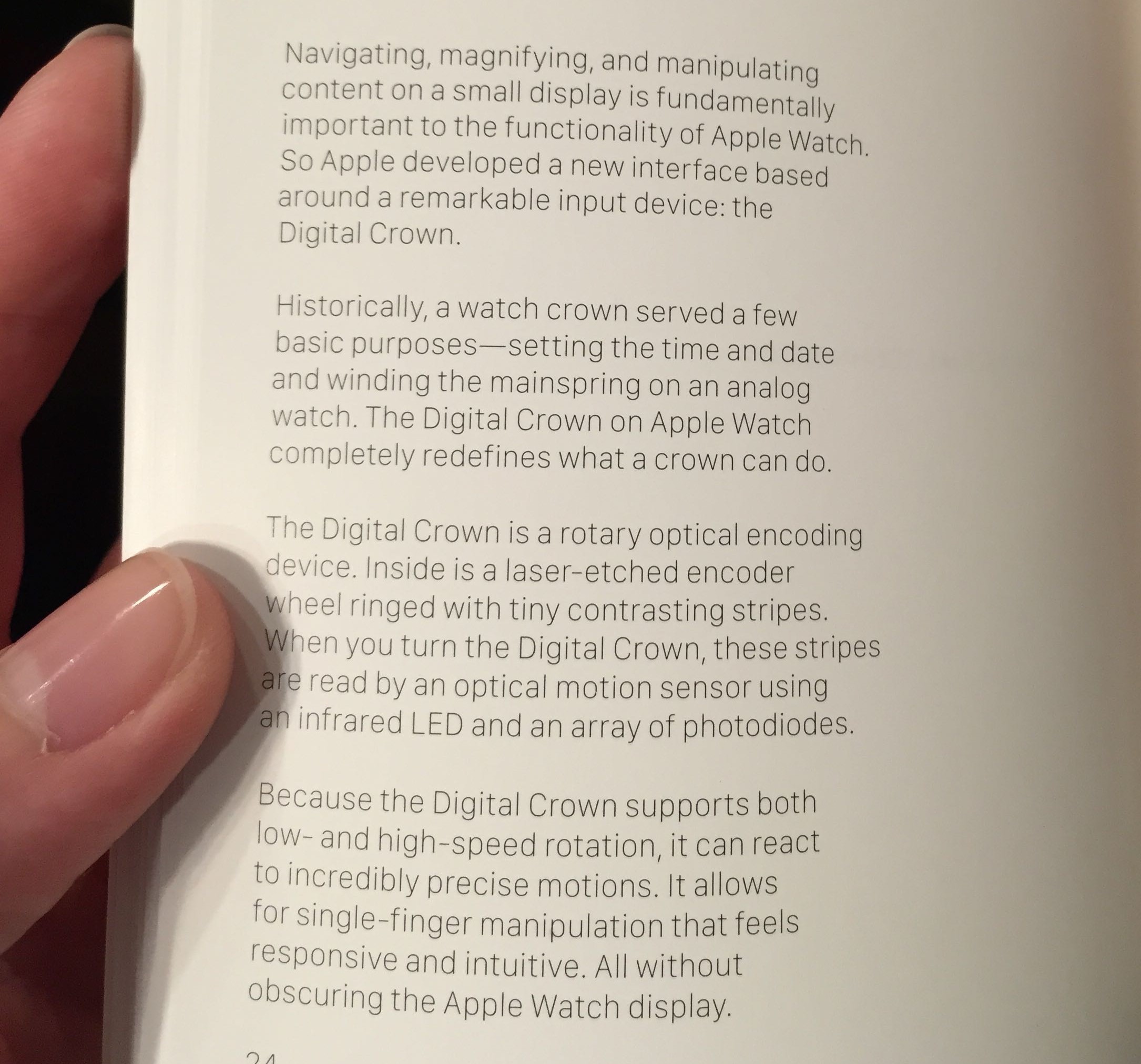 The contrasting stripes are then“read by an optical motion sensor using an infrared LED and an array of photodiodes” when you turn the Digital Crown.

Another page features a close-up of the 18-karat gold Digital Crown. 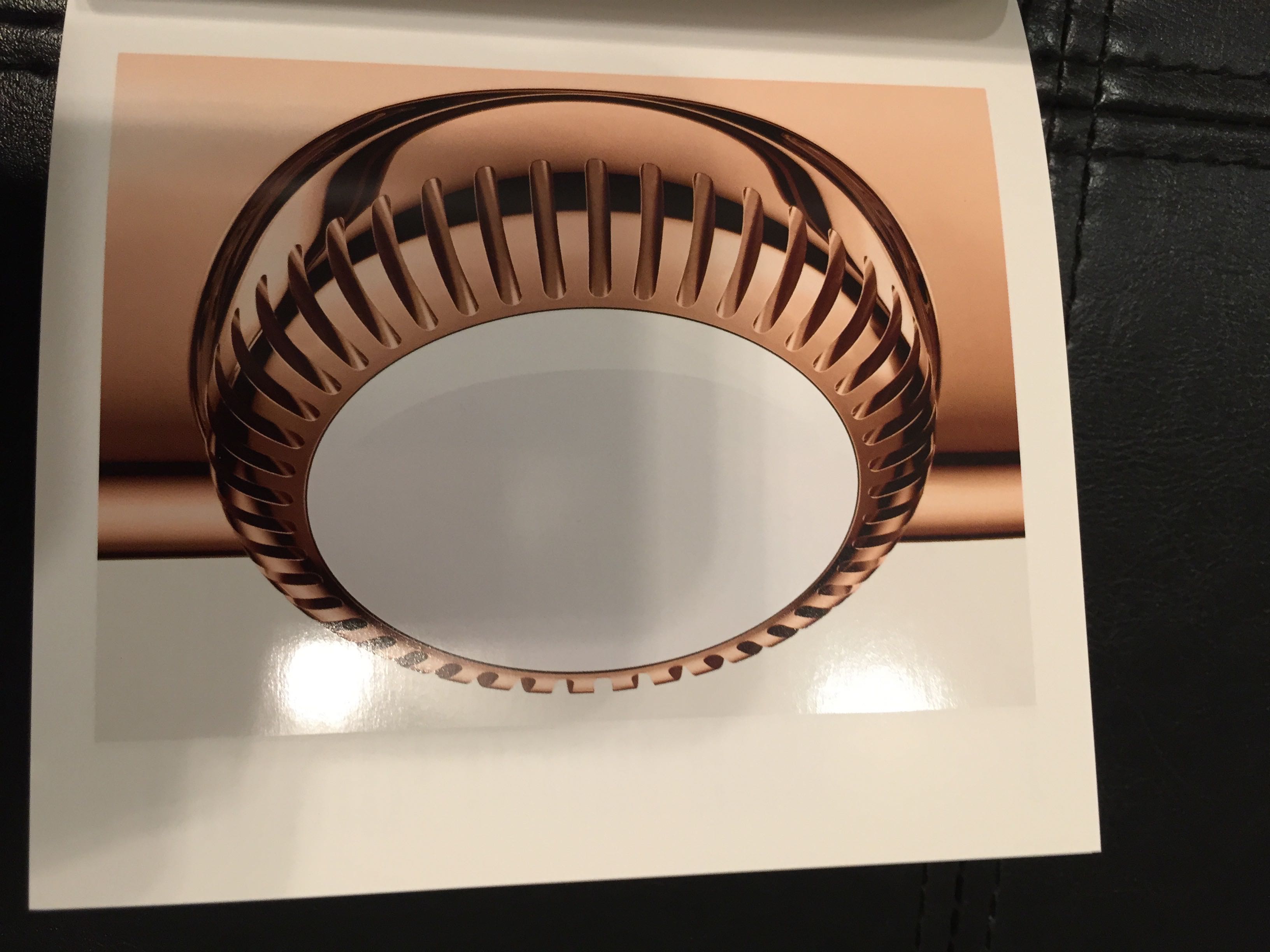 Apple writes that “understanding the intimacy of touch was paramount” in designing the Taptic Engine. To create a haptic vocabulary users would easily recognize, Apple “worked with experts in the field of haptics.” 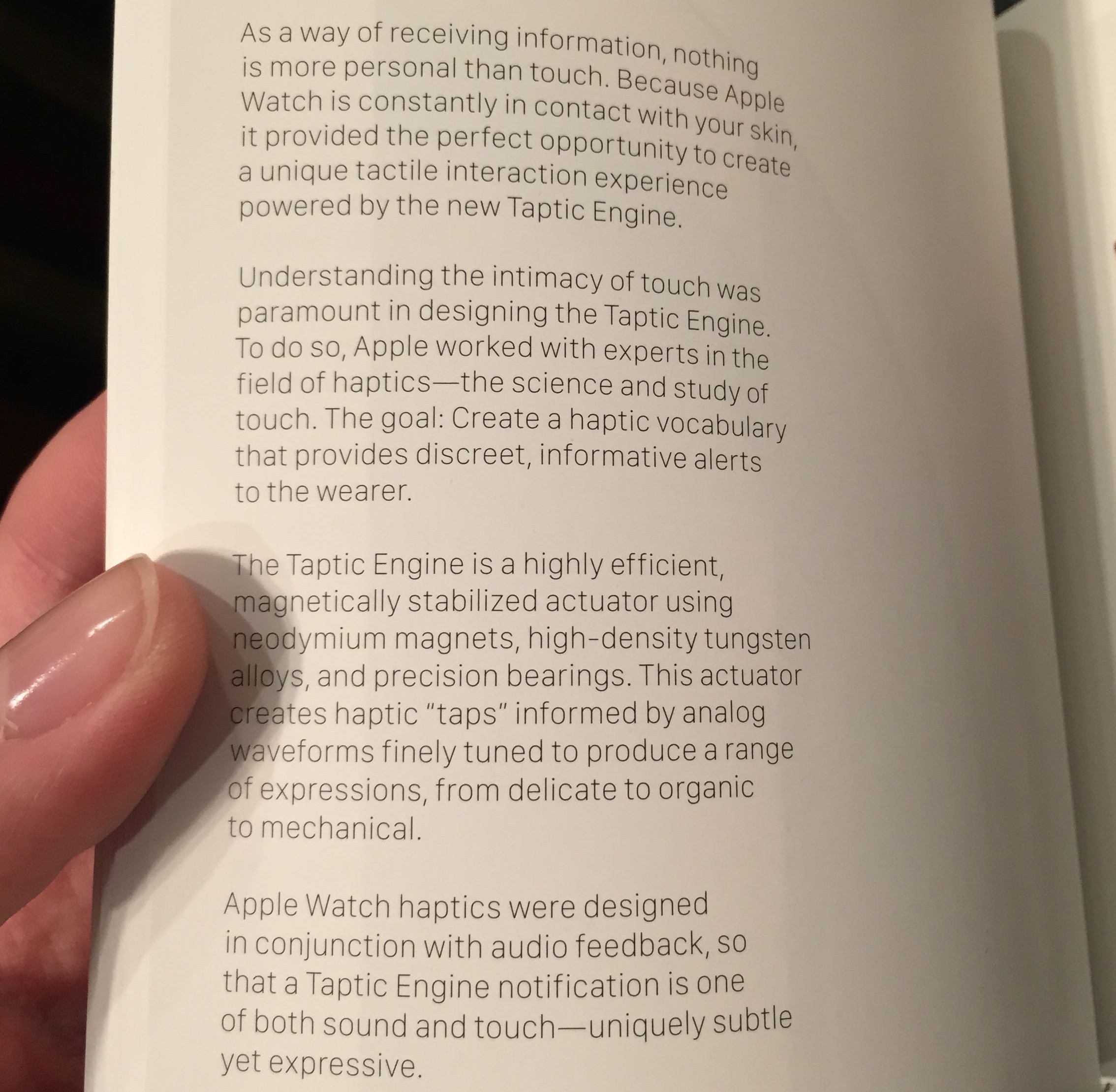 The Taptic Engine is “a highly efficient, magnetically stabilized actuator using neodymium magnets, high-density tungsten alloys and precision bearings”. The actuator creates taps on your wrist, which are “informed by analog waveforms finely tuned to produce a range of expressions, from delicate to organic to mechanical”.

In creating its smallest speaker yet, Apple created a barometric vent that equalizes internal and external air pressure rather than enclose the speaker within a membrane of Teflon plastic, which increases audio distortion.

“Apple engineers solved this by designing a speaker diaphragm made of water-resistant material: dual-part liquid silicone.” Thanks to its softness and responsiveness, the speaker produces “clean sound with less distortion”.

The heart rate sensor on the back of the device uses four LEDs, two green and two infrared, and two photodiode detectors to measure your heart rate. The back crystal is made by “heating zirconia in a die at 2460 degrees Fahrenheit for over 30 hours,” explains the company. 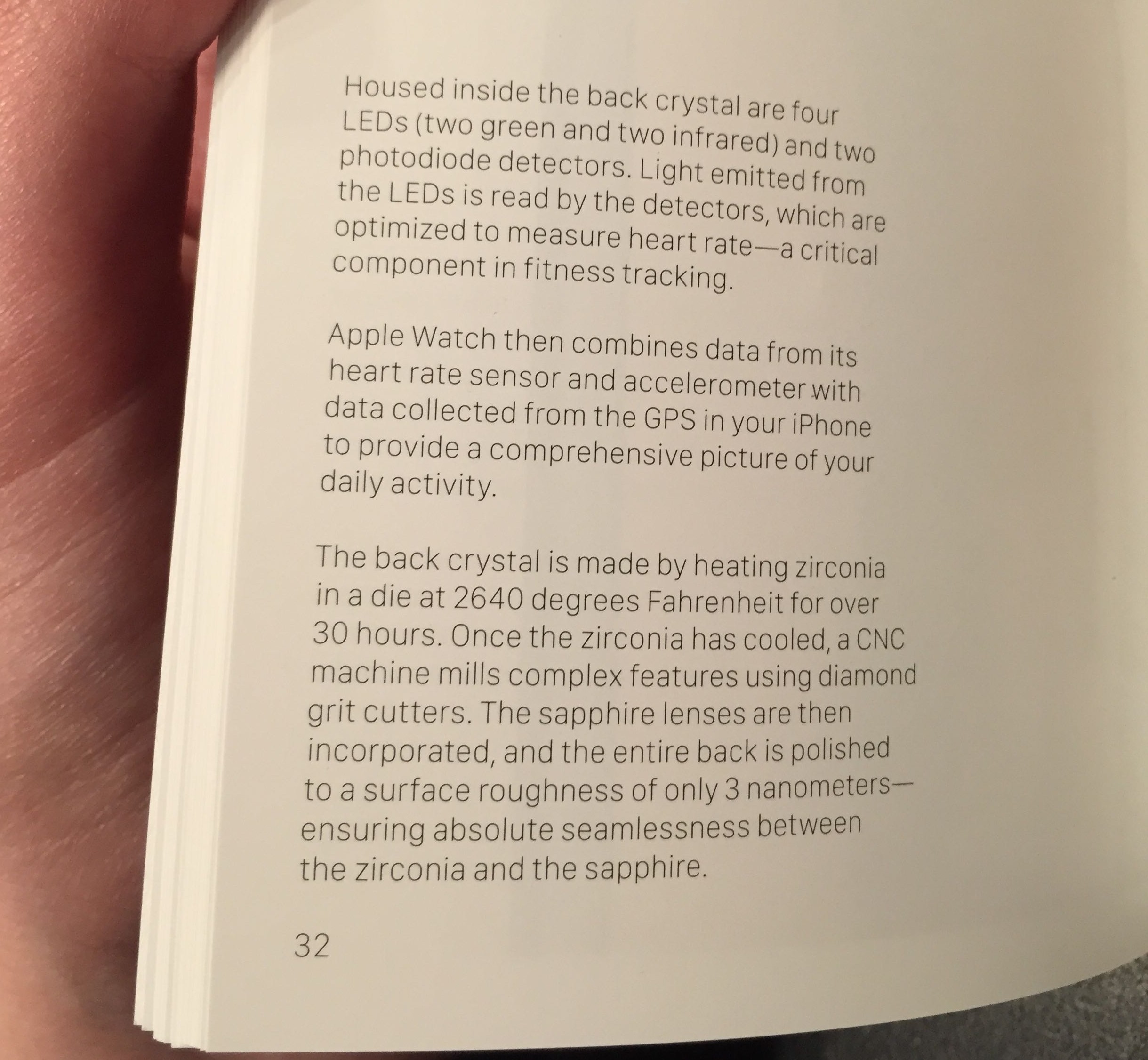 The sapphire lenses are then incorporated and the entire back is “polished to a surface roughness of only three nanometers” which ensures “absolute seamlessness” between the zirconia and the sapphire. 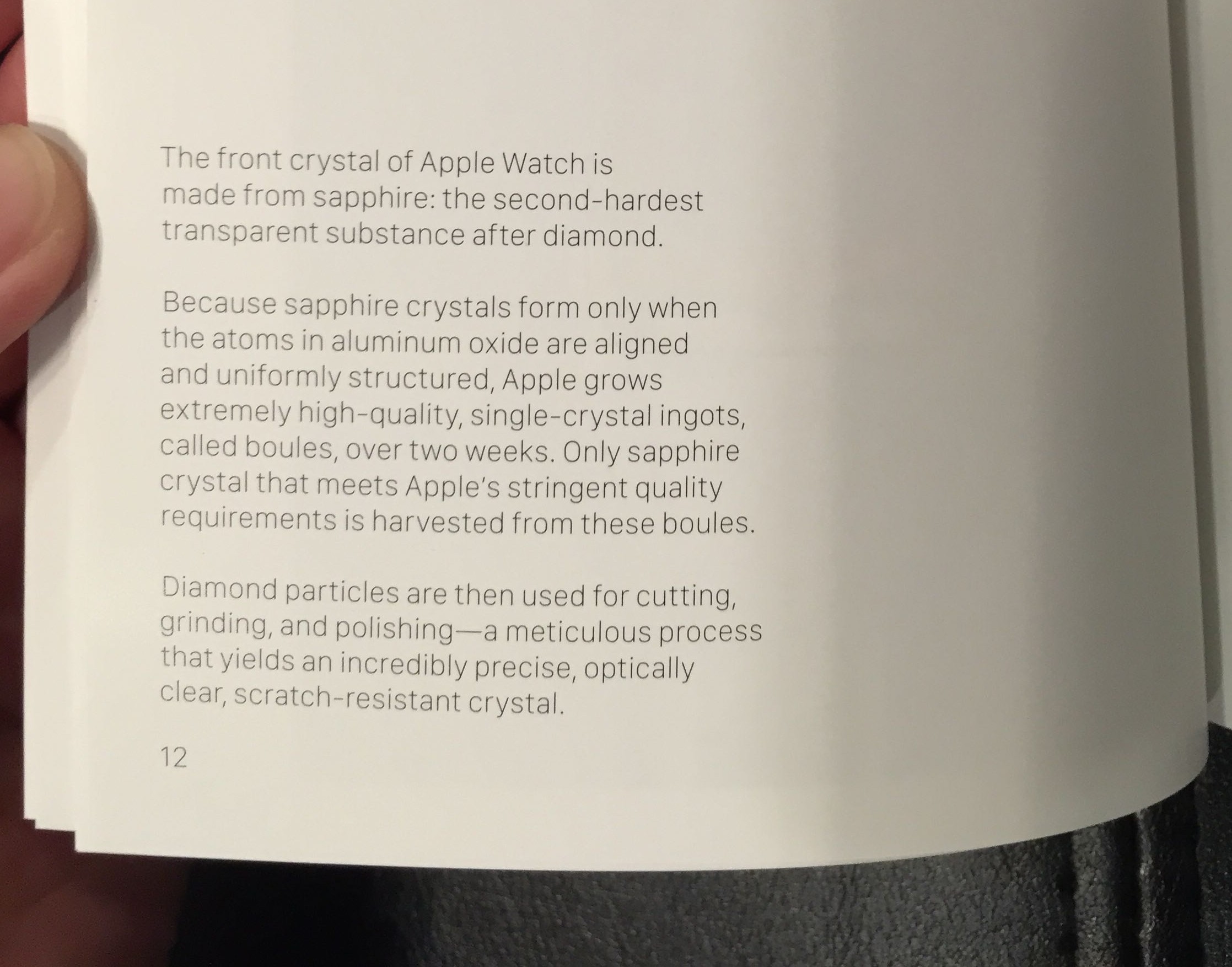 What they don’t tell you is that the sapphire-coated screen actually degrades image quality because the material doesn’t perform as well in high ambient light and at large viewing angles compared to the traditional glass.

Apple chose fluroelastomer for the Sports Band due to the material’s thermal and water resistance, flexibility, strength and durability. A special compression molding process alters the molecular structure of the fluoroelastomer within the die. 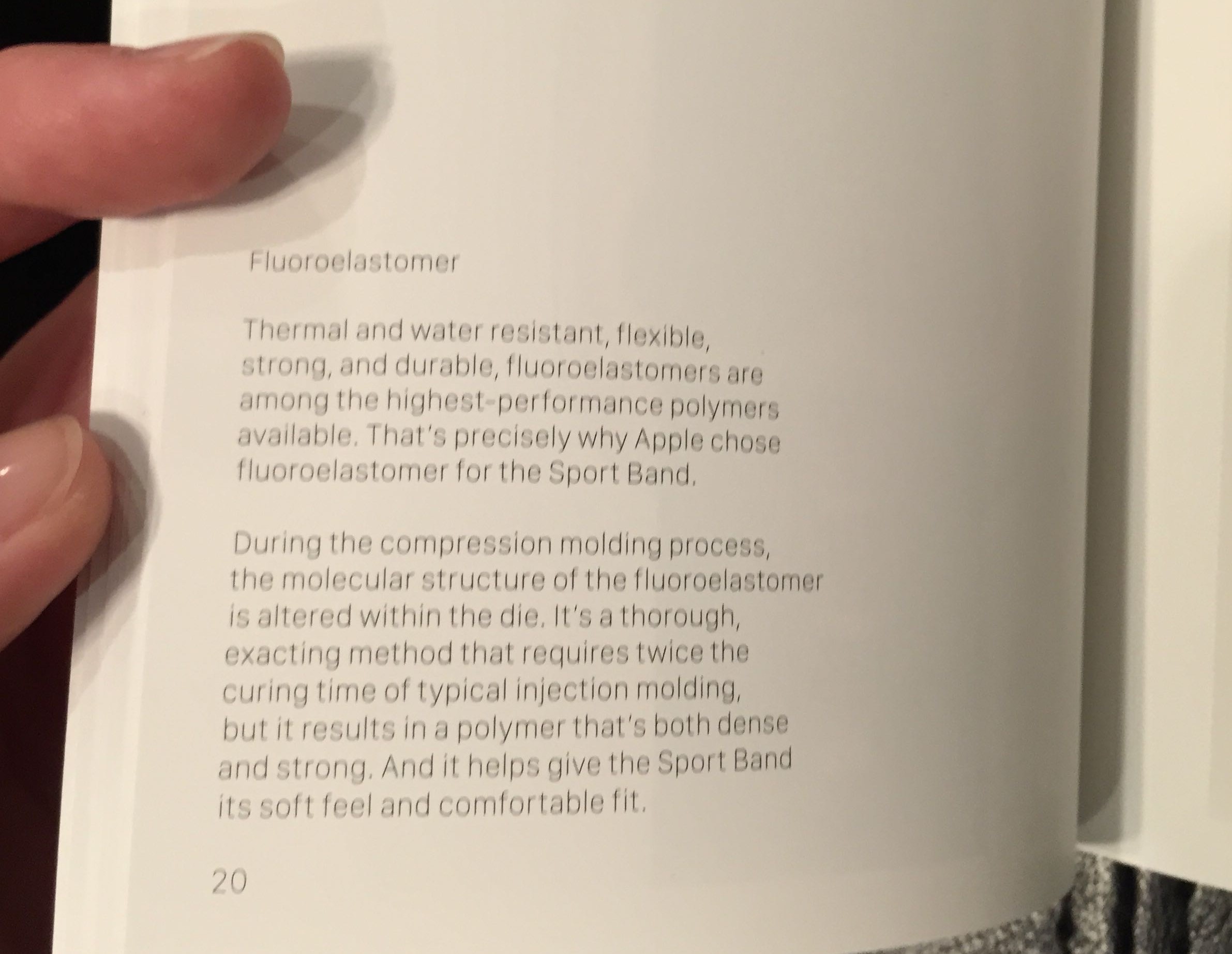 The method requires twice the curing time of typical injection molding and results in a polymer that’s “both dense and strong” while giving the Sport Band its “soft feel and comfortable fit”.

I own an Apple Watch Sport with a Sport Band and couldn’t be happier with it: fluoroelastomer looks great in person and performs as advertised.

Apple’s special kind of 18-karat gold is twice as hard as the traditional gold while preserving its trademark color and hue. The alloys are heat-treated and compressed multiple times to yield “dense, pore-free billets” of strong 18-karat gold. 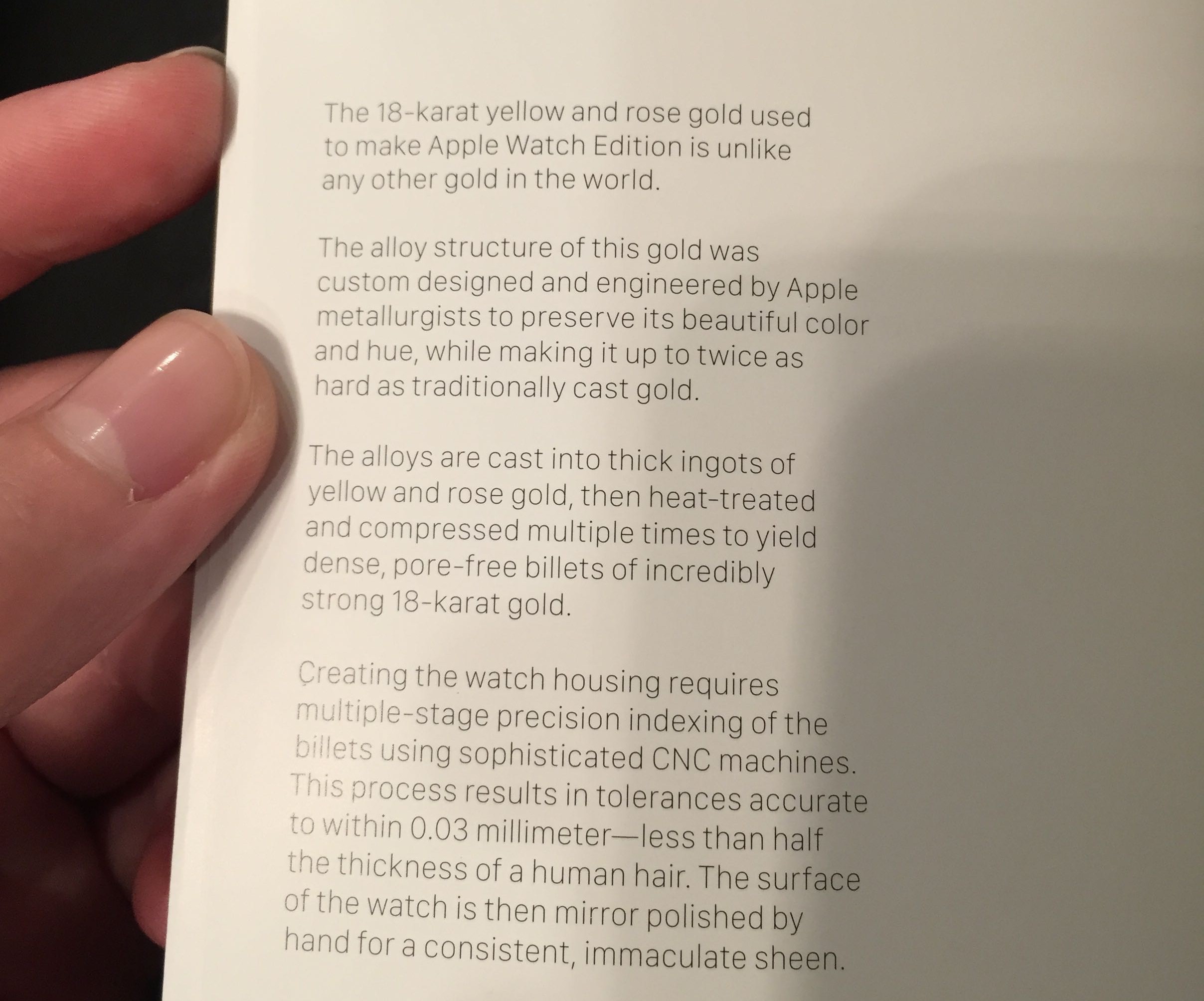 As for the watch housing, CNC machining processes yield tolerances accurate to within 0.03 millimeter.

Apple says its leather for Apple Watch Edition Classic Buckle and Modern Buckle straps comes from “select artisan tanneries” in France and the Netherlands. “This leather is tanned and treated to be extremely soft and supple,” reads the booklet. 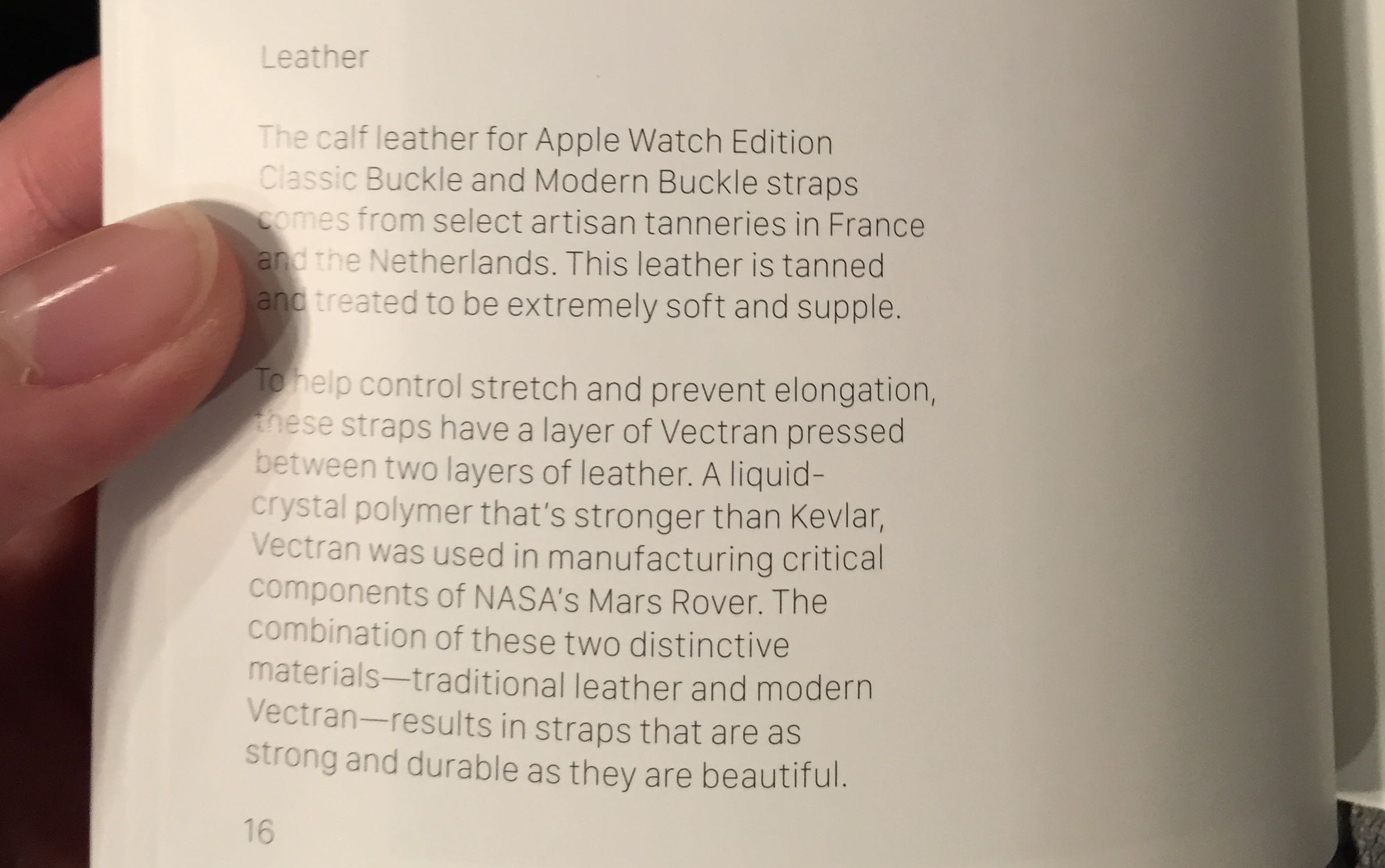 I find everything about this booklet — its layout, wording, typography and concept — quite fascinating.

In addition to the booklet and a cleaning cloth with the word “Edition” embossed into the material, the Apple Watch Edition’s leather-covered box has a Lightning connector with integrated MagSafe charger.

All photos via MacRumors forums.