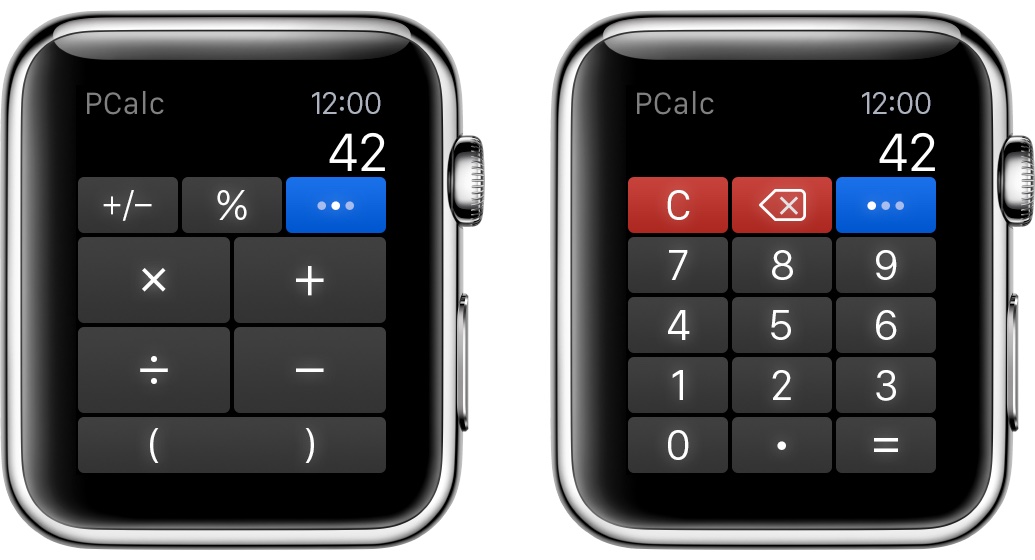 Thanks to independent iOS and Mac developer James Thomson, you can now wear PCalc on your $400+ Apple Watch. The award-winning $9.99 calculator app for the iPhone and iPad was updated today with WatchKit support.

The app is very nicely done and feels native. It puts the full calculator with RPN Support on your wrist, along with a Glance to see the result of your most recent calculations from your watch face, a tip calculator and other goodies.

Thomson’s own take on wrist calculations includes the full calculator for performing basic calculations. Unlike some other calculator apps for the Apple Watch, PCalc doesn’t require you to force-press the screen to access the basic math operators.

Next, PCalc’s Glance lets you see the result of your most recent calculations, separately for the iPhone and Apple Watch, right from your watch face.

Lastly, a tip calculator makes it easy to calculating your tip and total at lunch. And if you tap your total at the bottom, the app will cycle between split, total and tip.

Overall, the app isn’t sluggish at all and feels very native.

Even if you rely on Siri for quick math on your Apple Watch, you’ll still love PCalc because there’s something inherently fun and useful in having an RPN calculator watch on your wrist, even more so given Apple hasn’t brought the stock iOS Calculator app to the Apple Watch.

Math buffs into wrist calculations should also check out Tapbots’ nicely done CalcBot 2, available on a freemium basis and with support for the Apple Watch, although it doesn’t feel as native as PCalc and has a more cumbersome user interface.

In addition to the Apple Watch, the 11-megabyte app supports any iPhone, iPod touch and iPad with iOS 7.0 or later.