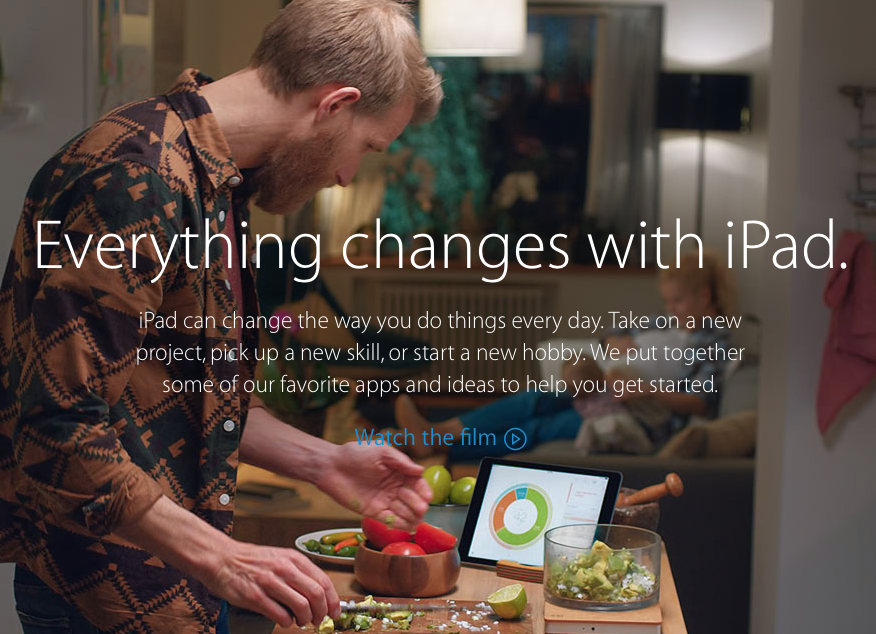 Apple on Wednesday launched a new web ad campaign for its struggling iPad, highlighting ways the tablet can change the way people do things. A new microsite on the company’s website showcases a variety of iPad apps that can help with things such as cooking, learning and more.

Much like Apple’s previous ‘Your Verse‘ campaign, the message of “Everything changes with iPad” is that the tablet can be helpful in a number of situations. The company has long been trying to convince potential customers that the iPad can be used as more than an entertainment device.

The page starts off with an upbeat video, showing kids and adults using the iPad in assorted settings to a buoyant soundtrack. It then breaks off into 6 sections: Cooking with iPad, Learning with iPad, Small Business with iPad, Traveling with iPad, Redecorating with iPad, and Why iPad?

Clicking on a section produces a predictable result—you’re taken to a page that showcases relevant apps. For example, Cooking highlights Panna, NYT Cooking and Green Kitchen, and offers up some tips and tricks. The final Why iPad? section takes you to a ‘Why You’ll Love iPad’ page.

This is the latest move in Apple’s ongoing efforts to reverse slipping iPad sales. The company reported last week that it sold 12.6 million iPads during its March quarter, down more than 4 million from last year. Tim Cook said on the earnings call that he is confident iPad growth will return.