Apple has posted its [fiscal] second quarter earnings report for 2015 this afternoon, and they are impressive. The Cupertino company beat Wall Street estimates, recording $58.01 billion in revenue on the back of strong iPhone sales.

More than 61 million iPhones were purchased during the usually-slow, post-holiday second quarter. That’s over 4 million above analyst estimates, and it looks like the handset did particularly well in China—up 72% year-over-year.

“We are thrilled by the continued strength of iPhone, Mac and the App Store, which drove our best March quarter results ever,” said Tim Cook, Apple’s CEO. “We’re seeing a higher rate of people switching to iPhone than we’ve experienced in previous cycles, and we’re off to an exciting start to the June quarter with the launch of Apple Watch.”

“The tremendous customer demand for our products and services in the March quarter drove revenue growth of 27 percent and EPS growth of 40 percent,” said Luca Maestri, Apple’s CFO. “Cash flow from operations was also outstanding at $19.1 billion.” 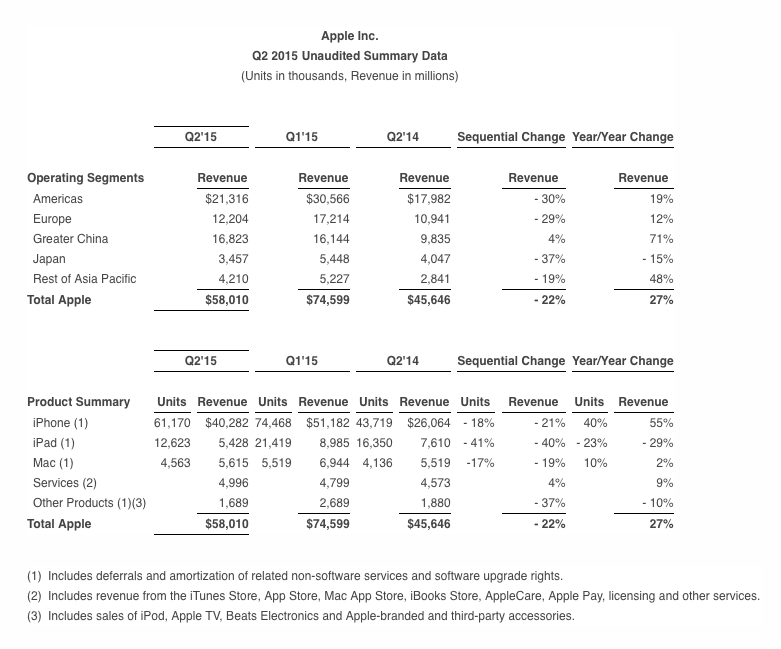 There seems to be a trend developing in Apple’s recent earnings reports: the iPhone surprises with stronger-than-expected sales while iPad sales continue to dwindle. Mac sales still look good, especially in an overall-down PC market.

Apple’s earnings call will start in just a few minutes. If you’d like, you can listen to it live via the investors portal, or you can tune into iDB for our recap. Perhaps most interesting will be what it has to say about the Apple Watch.