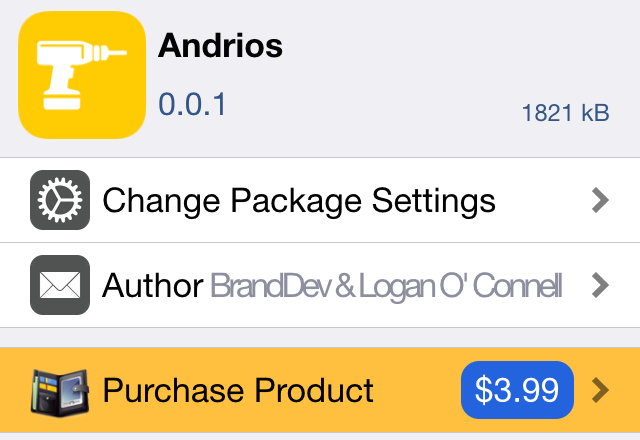 Andrios, the jailbreak tweak that brings some awesome Android-inspired features to iOS, was our top item on this week’s episode of Let’s Talk Jailbreak. It’s rare when a tweak gets the thumbs up from Cody, Sebastien, and I, but Andrios was able to pull off that impressive feat.

Since our initial review aired, I’ve received numerous emails, tweets, and messages about Andrios and its launch. After a slight delay, I’m happy to tell you that the tweak is now available for purchase and download from Cydia’s BigBoss repo.

Just what makes Andrios so special? I think it’s the attention to detail more than anything else. There are over half-a-dozen widgets and features that make iOS work more like Android. These include search widgets, settings widgets, and a revamped Notification Center.

At $3.99, the tweak is definitely not cheap, but it’s one of the most impressive releases that we’ve seen in all of 2015, and it at least deserves your consideration if you’re still jailbroken. If you do decide to download Andrios, I have to tell you that I recommend combining it with Kvasir II—an Android-inspired WinterBoard theme that perfectly compliments the features brought to the table by this tweak. I also recommend that you save an Android Lollipop image as your iPhone’s wallpaper for the finishing touch.

If you’re still not convinced, watch our video above, or check out our full review of Andrios for more details. Even if you’re not a big fan of Android, you’ll no doubt appreciate the obvious effort that developers BrandDev and Logan O’Connell put into this release.

Have you tried Andrios yet? If you have, please drop us a line below with your thoughts on the tweak.