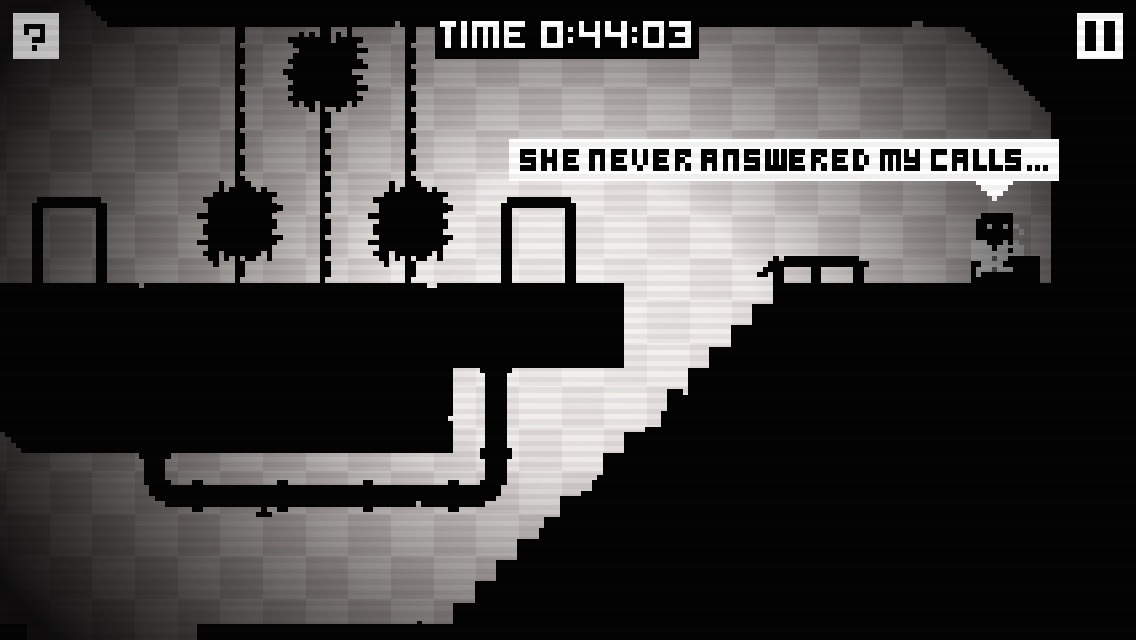 I like atmospheric games. I think it adds a bit of, well, atmosphere. Shadowy figures crossing dimly lit environments can help put you into the right mood. You never know what you are going to find when you make it to the next scene.

Burn It Down is an atmospheric platform game with a retro pixel art design. Players traverse the dark dangers of a mansion dungeon in search of a missing loved one. We’ve got a game review of Burn it Down for you today.

Players take control of a pixel person in shadow (those glowing white eyes are so eerie). His girlfriend has gone missing and he goes on a mission to find her. Along the way, you discover some, not-so-great things about the relationship. For example, there are plenty of pictures of the girlfriend on the wall, but none of the couple together. The protagonist will sometimes muse over recent unreturned phone calls. You start to wonder if you are rescuing a kidnapped girlfriend, or if something even darker looms in your future.

As far as game mechanics go, this is a platformer with only two controls, left and right. You will have to jump from one platform to another, but only by getting a running start with enough room. When you’ve given yourself enough lead, you will automatically jump as you reach the edge. In some cases, a jump is detrimental.

There are also switches that will turn off spikes so that you can cross over them without being killed. Sometimes, you must reach the switch before you can continue. 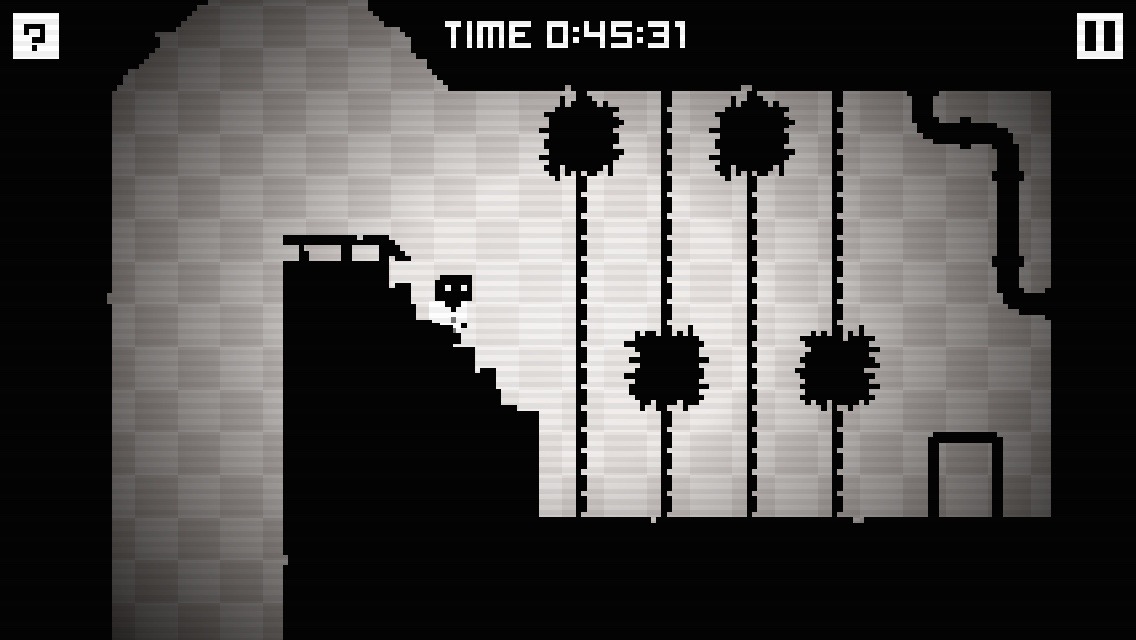 Players jump across platforms, avoid spikes, and try to clear bottomless pits. You will start off in one room and must find the door to the next. If you survive, you will enter another obstacle filled room. If you die, which you will probably do a lot, you will start over in the same room.

Most of the game requires you to time your movements to avoid spikes that jut out of the floor or ceiling. You will also be tasked with figuring out whether to jump from a platform, or simply fall off. Sometimes, if you jump, you will land on spikes. Other times, if you just fall, your death awaits you. If you do need to jump, it is likely that something is stopping you from having the room you need, like spikes. You’ll have to time your run to coincide with the spikes retracting. There are also times when you must run and jump across multiple small platforms in order to cross a room. Otherwise, you’ll lose momentum and fall to your death.

There are 50 levels and you only have one hour to complete. I’m not exactly sure what happens after the time is up because I made it out in time. But, I’m guessing that you just have to start over from the beginning.

If you can’t figure out how to get through a level, you can use a “Shadow Guide” which shows you how to get to the next door. The game comes with three Shadow Guides, but you can buy more through an in-app purchase. The game is easy enough that you probably won’t even need three. 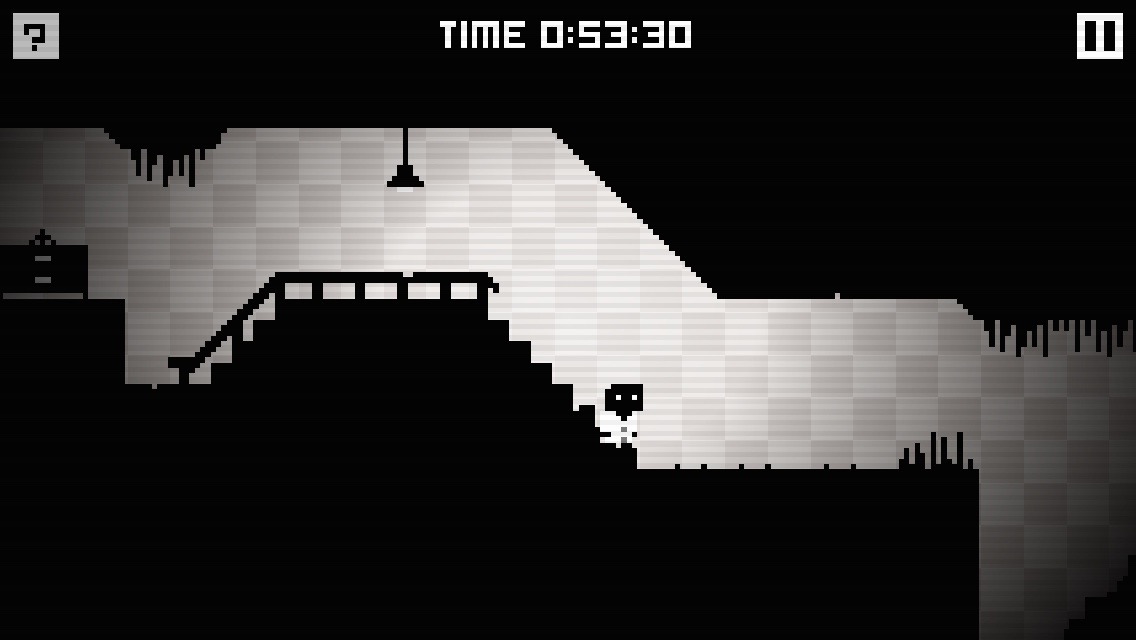 This is a fun little platform game that doesn’t require a lot of time. You can play through the entire game in about 45 minutes. There is just enough skill needed to keep you interested, but it isn’t hard.

The in-app ads are pretty intrusive. If you die a certain number of times (maybe five?) an advertisement pops up on the screen while your clock is running in the game. The audio of the game mixes with the audio of the ad. The ads only last about four seconds. You can easily get rid of them for $0.99.

Burn It Down is free. You can play through the entire game without spending any money. However, if you die a lot (which I did), you will be stuck watching some ads unless you pay $0.99 to remove them. The replay value is somewhat low. The only reason to replay the game is to get through it faster. But, for free, you won’t be losing anything.

Even with advertisements and only lasting about an hour, I still liked this game. It is somewhat of a treat in a sea of games that all look the same. It doesn’t cost any money and you can enjoy a fun platformer for about an hour. It’s like going to the park on Saturday afternoon. This game is available on the iPhone, iPad, and iPod touch.

Limbo is probably the most popular atmospheric platform game.

What do you think of Burn It Down? Let us know in the comments.