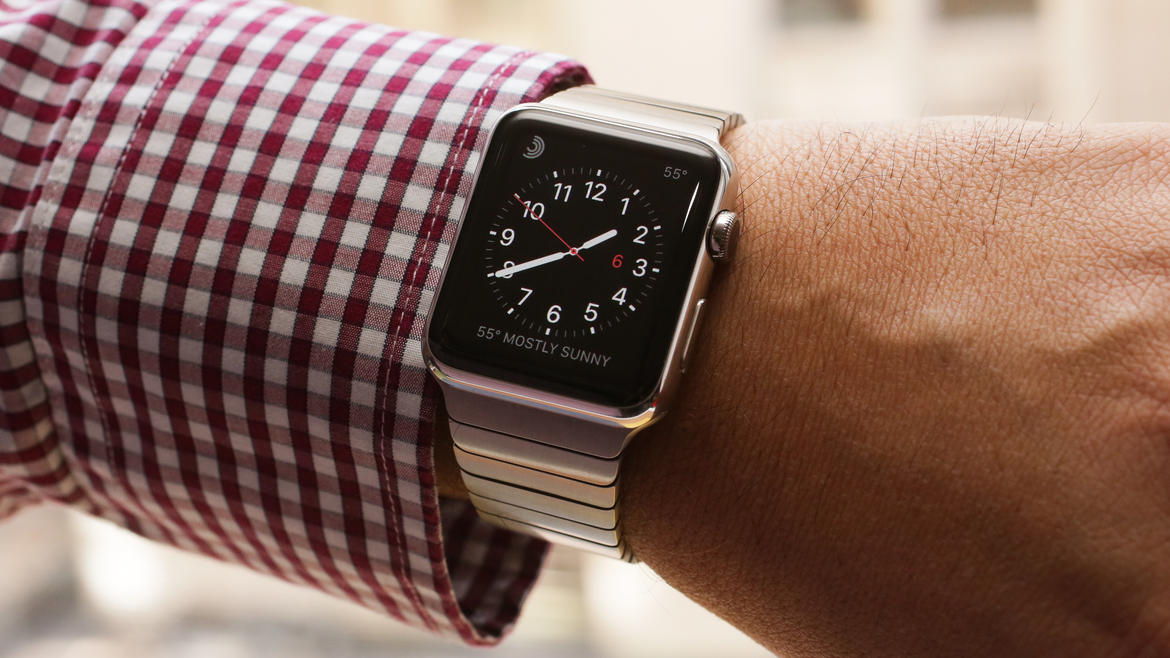 I have an Apple Watch on pre-order. Many of us do. How I got here hasn’t been as simple as most though, because I feel like I have been through the four stages of Apple Watch purchasing – elation, denial, buyer’s remorse and confidence. And not necessarily in that order and some more than once.

The story actually takes me back to before the Apple Watch was a real thing. The rumors of an iWatch were very much in their infancy, with no real details to go off and just a faint whiff of optimism in the air. We all had the feeling that Apple was working on a wearable – it had to be – but what it would turn out to be, and when it would ship, was anyone’s guess.

At the same time the likes of Motorola and Samsung were going at it in the world of Android smartwatches. The Moto 360 was my favorite, and I often said that if it worked with the iPhone, I might buy one. Turns out now that Google might be working to make that a reality, but we didn’t know that at the time.

The lack of a Moto 360 on my wrist led me to wonder what the iWatch could be. Would it be round? Would it have all the sensors we hoped? Would it suck? Whatever the answers to those questions the lack of any other option had me keen for Apple to put its money where its mouth was and make the iWatch into more than a rumor. More than guesswork. The end result? The Apple Watch.

I immediately wanted one. It was like the Moto 360 but better, if only because I would be able to use one. Take my money, Apple. I’m in!

Then came the reviews.

Reading through reviews from the usual suspects had me deflated to say the least. Usually these things take a familiar pattern – “it’s very good, but has a couple of minor flaws that we felt like we had to put in there to keep non-Apple people happy.” With the Apple Watch, the concerns seemed to mount up. Tales of woe were many, and the only real positive coming out of reviews was the battery life. Even then it wasn’t stellar, but good enough to do the job. At the prices being asked for the Apple Watch, was that enough to make me buy?

I decided it wasn’t. No Apple Watch for me.

Then came pre-order day. I’m back in!

I always knew I was a sucker for anything new and shiny, but I never quite realized how bad I had it. Come 08:01 UK time, I was sat in my kitchen, feeding our 7-month old with the Apple Store app open on my iPhone. I ordered the Space Grey Apple Watch Sport that I had always planned on ordering. After all, I could always cancel the order and let someone else move up the queue later. Yes I know, I’m a bad man.

Even though I had ordered, I really, deep down at least, expected to be cancelling it. I’m particularly bad when it comes to buyer’s remorse, and considering I wasn’t even sure I wanted to keep the thing it was always at the back of my mind to cancel. I even nearly did it by accident one day. That was fun.

In the end I came up with a compromise. I wouldn’t cancel, but instead I would make an appointment at the local Apple Store so I could go and try the thing out. How best to decide whether I liked the thing than actually using it for a while, even if it was an admittedly short one?

Walking into the Apple Store I was all set to walk back out ten minutes later and cancel my pre-order. That was my mindset as the Apple Store employee strapped a Space Grey Apple Watch Sport to my wrist. I tried that on, and then an Apple Watch with the black leather loop just to see if all the stick it was getting was justified. Turns out it’s not, at least at first blush.

I spent about fifteen to twenty minutes in the store, trying watches on and playing with the demonstration units. I tried to make them lag, and I tried to confuse myself with the interface that some people claimed was just too much for them to get their heads around. In the end, I left.

But I didn’t cancel my pre-order. Instead, I signed into the iDB Slack channel and this is what I said: 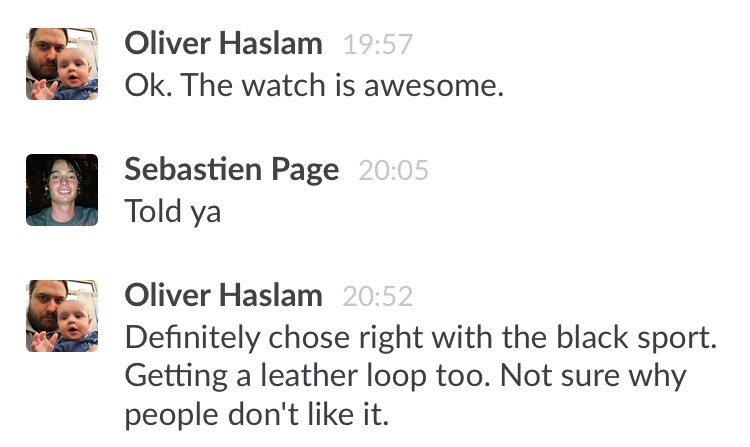 And that’s where I am today. In the meantime, countless app developers have released updates to iPhone apps that bring a watch component into play and they just increase my anticipation for the Apple Watch. The stock watch is fine on its own, but it’s what developers can do with it that has me most excited. The possibilities might not quite be endless, but they aren’t far off.

Right now the Apple Watch falls into one of two camps for most people. Firstly there are those that, like me, think it could be big for Apple.

And secondly, there are those that just don’t get it. When the iPhone arrived there were people that said they never needed to have a computer in their pocket. Why would they ever want to browse the web on a screen that small? These days, they’re surgically attached to their phone and, I dare say, wouldn’t want to live without it. I wouldn’t be surprised if the Apple Watch goes the same way. It might take five years, but it might just get there.

Of course, it might not. And I might send my watch back after ten days because the novelty has worn off and I don’t really use it.

I’ll let you know in a couple of weeks.