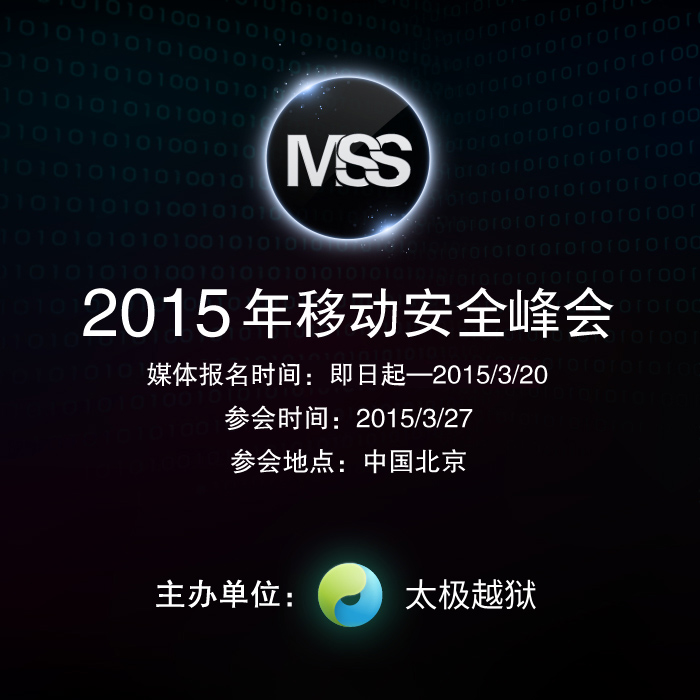 Chinese company/team of hackers TaiG is organizing Mobile Security Summit, a jailbreak convention scheduled for March 27, in Beijing, China, with several prominent figures of the jailbreak community already set to attend the event.

The announcement of this event hasn’t been publicized quite yet on this side of the world, but it seems the TaiG team aims at bringing its own version of JailbreakCon to mainland China. The schedule seems quite tight since it’s only two weeks away from now, but that hasn’t stopped famous hackers such as comex, P0sixninja, Pimskeks, and Chronic from committing to present at the event.

Self proclaimed “most authoritative annual domestic first mobile security summit,” the first edition of what could become an annual event will have security experts from all over the world get together and share their knowledge of mobile security.

In an exclusive interview with TaiG back in December, we had learned that the team wanted to hold a jailbreak convention on January 16 of this year. This never materialized likely because of the extremely tight schedule. I’m personally a bit skeptical about the timeline of this event too, but I am hopeful the folks at TaiG will be able to pull it off. If anything, they are set with an interesting panel of experts, with maybe more to be announced in the near future.

Unless you’re in China, I doubt most iDB readers will be able to attend, but if you’re still interested, here are two ways to get you started: