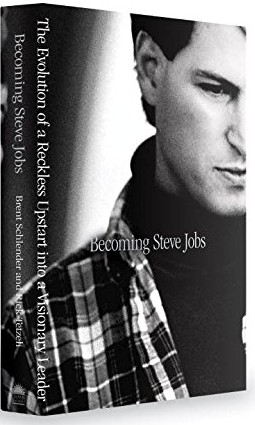 Though it may seem the world doesn’t really need another book on Steve Jobs, I beg to differ given Walter Isaacson’s disappointing biography on Apple’s famous co-founder and late CEO.

Written by the The Wall Street Journal and Fortune reporter Brent Schlender and Rick Tetzeli, Executive Editor with Fast Company, Becoming Steve Jobs: The Evolution of a Reckless Upstart into a Visionary Leader promises to be the Steve Jobs book that true fans deserve.

Scheduled to arrive on March 24 via Crown Publishing Group, it’s now available for pre-order over at Apple’s iBooks Store or Amazon’s Kindle Store for $15.

“There have been many books—on a large and small scale—about Steve Jobs, one of the most famous CEOs in history,” the blurb teases. “But this book is different from all the others.”

A rich and revealing account that will “change the way we view Jobs”, the book tells how one of the most powerful figures in technology was able to combine his relentless passion with a more mature management style to create the world’s most powerful corporation.

The authors make it clear that Jobs’s success at Apple was far more complicated than simply picking the right products.

“He became more patient, he learned to trust his inner circle, and discovered the importance of growing the company incrementally rather than only shooting for dazzling game-changing products,” the authors note.

Apple pundit John Gruber, who was lucky enough to receive an advance copy a few weeks ago, says Jobs did participate in the creation of this book as some of the topics discussed in it draw from Schlender’s numerous interviews with Jobs spanning 25 years.

“Remember the 1991 joint interview with Jobs and Bill Gates? That was Schlender,” said Gruber. “As the book makes clear, Jobs and Schlender had a very personal relationship.”

The authors were able to get “an astonishing amount of cooperation” from Jobs’ colleagues past and present from Apple and Pixar, including current CEO Tim Cook and Jobs’ widow, Laurene Powell Jobs.

Becoming Steve Jobs takes on and breaks down the existing myth and stereotypes about Steve Jobs. The conventional, one-dimensional view of Jobs is that he was half-genius, half-jerk from youth, an irascible and selfish leader who slighted friends and family alike. Becoming Steve Jobs answers the central question about the life and career of the Apple cofounder and CEO: How did a young man so reckless and arrogant that he was exiled from the company he founded become the most effective visionary business leader of our time, ultimately transforming the daily life of billions of people?

Drawing on incredible and sometimes exclusive access, Schlender and Tetzeli tell a different story of a real human being who wrestled with his failings and learned to maximize his strengths over time. Their rich, compelling narrative is filled with stories never told before from the people who knew Jobs best, and who decided to open up to the authors, including his family, former inner circle executives, and top people at Apple, Pixar and Disney, most notably Tim Cook, Jony Ive, Eddy Cue, Ed Catmull, John Lasseter, Robert Iger and many others.

In addition, Brent knew Jobs personally for 25 years and draws upon his many interviews with him, on and off the record, in writing the book. He and Rick humanize the man and explain, rather than simply describe, his behavior. Along the way, the book provides rich context about the technology revolution we all have lived through, and the ways in which Jobs changed our world.

That “The book is an accurate, engaging retelling of the known history of Jobs’s life and career, but also contains a significant amount of new reporting,” as Gruber put it, gives me hope that the w’re in for a real treat here.

And if Gruber claims that “Becoming Steve Jobs is going to be an essential reference for decades to come,” who am I to question his judgment?

I’ll be scrutinizing the book as soon as it comes out in search for the juiciest bits and previously unknown tidbits on Apple and Steve Jobs to report here so watch this space.

Pre-order Becoming Steve Jobs via the iBooks Store or Kindle Store for $14.99.

Should you prefer the dead tree edition, Amazon is taking pre-orders on the hardcover edition from Crown Business in exchange for $21.78 (regularly $30).