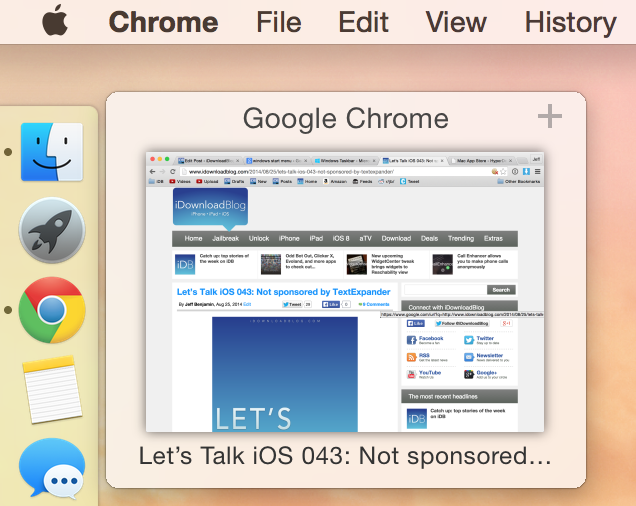 One of the things that I appreciate about Windows is the ability to view previews of running apps by hovering your mouse cursor over an app in the Taskbar. OS X doesn’t natively allow you to do such a thing, but it’s nothing that HyperDock—a $9.99 purchase from the Mac App Store—can’t handle.

I don’t know about you, but I usually like to know what’s behind a door before I open it. Clicking on an app in the dock with stock OS X is like opening a door without knowing what’s behind it. OS X provides little context as to what’s running in the app, which can be frustrating.

In Let’s Talk iOS episode 43, we outlined some of our favorite Mac apps, and HyperDock was among them. HyperDock allows you to change the behavior of the OS X dock, and one of its headlining features is the ability to show full previews of running apps.

Having previews of running apps means that you can hover your mouse over the app, and a small preview box will pop up outlining what you will see when opening the app. In my opinion, such functionality is an absolute necessity, and it’s one of the reasons why I install HyperDock immediately after performing a clean install of OS X.

HyperDock does much more than just enable app previews. It brings Windows-inspired window snapping, and features special previews for apps like iTunes, Spotify, and Calendar, and more. To me, it’s far and away one of the best ten bucks I’ve spent on my Mac, and I’ve been using HyperDock for many years.

Again, you can purchase HyperDock from the Mac App Store for $9.99. While that may seem like a lot, it adds a piece of functionality to OS X that I simply can’t live without, and I’m sure many others feel the same.

If you’re sitting on the fence about Hyperdock, you can download a free trial from its official website to take it for a test drive.

What do you think about HyperDock? Do you use it?