Aside from an alleged manufacturing mold and Ming-Chi Kuo’s prediction of a creative stylus accessory for Apple’s purported pro tablet, it’s been a few weeks now without a newsworthy iPad Pro rumor in sight. Courtesy of the French blog NowhereElse.fr on Thursday, we now have a better idea of the large form-factor iPad’s massiveness.

The publication has ostensibly managed to get hold of a manufacturing mold for an assumed iPad Pro protective case said to have been designed according to the genuine device dimensions. For context: rumors have mentioned two possible screen sizes for the iPad Pro, twelve inches and 12.9 inches. I’ve included the photo right after the break so check it out and feel free to chime in with your thoughts in comments.

Credited to a reliable source “with which I’ve worked for many years,” the photograph shows a mold that may or may not be for an iPad Pro protective case. At any rate, the source claims the mold is based on reliable device size data.

As you can see for yourself, there are four cutouts at the top and bottom of the mold, seemingly in line with recent iPad Pro talk of enhanced speakers for stereo sound in any orientation. 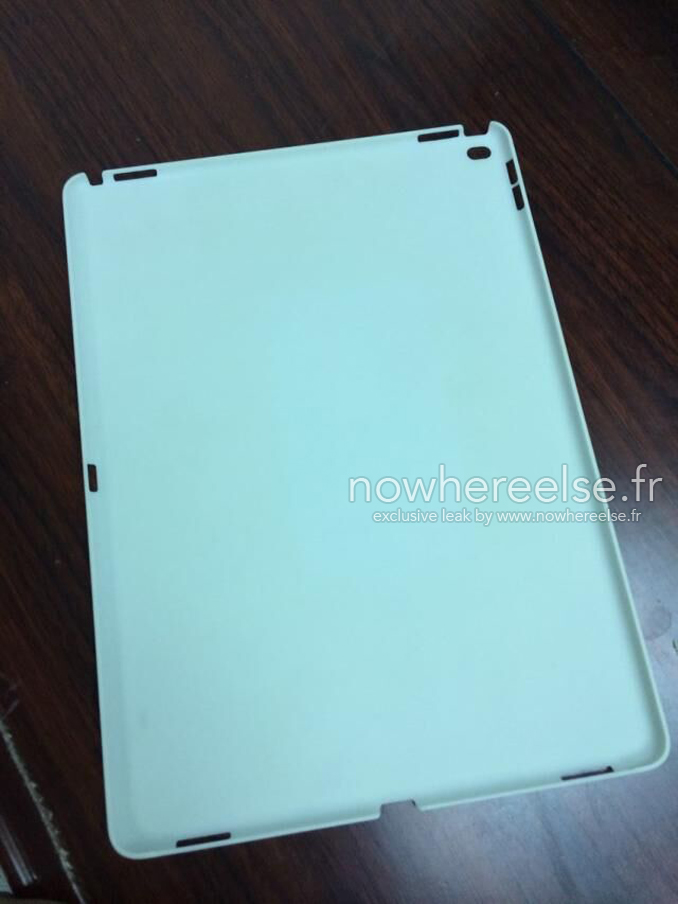 Other holes are in the right places, too.

You can clearly make out the cutouts for the rear-facing camera sensor, the headphone jack, the power/sleep button, the volume control buttons and the Lightning port.

The only mystery: that hole on the mold’s left side. Noting that iPad protective cases rarely, if ever, leave an opening for the SIM tray, author Steve Hemmerstoffer speculated that this may be an additional Lightning port for docking the tablet in landscape.

And back in 2010, Apple filed for a patent outlining a second port on the iPad’s left side, as shown above. With that in mind, we can at least speculate that the company has been researching a horizontal tablet docking solution.

I’m still wondering which moniker would be more appropriate for such a massive device, an “iPad Air Plus” or “iPad Pro,” If anything, the “Plus” nomenclature would fit Apple’s existing iPhone 6 naming scheme nicely.