First revealed as part of Twitter’s November 2014 platform update and formally announced on January 1, a new ‘while you were away’ feature is now officially available to all users of Twitter’s mobile app for iOS and Android, appearing at the top of users’ timelines.

The micro-blogging startup explained in a blog post Wednesday that the feature surfaces a few of the best tweets “you probably wouldn’t have seen otherwise,” as determined by engagement and “other factors.”

Of course, folks who check Twitter on a regular basis will see quick recaps of what’s happening much less versus those who only use the service sporadically.

This is a backend update so no app refresh is necessary.

Expect to start seeing recaps marked with a “While you were away” heading appearing in the iOS app today, at the top of your timelines. It’s also enabled in Twitter’s Android app and on is coming soon to the web interface at twitter.com. 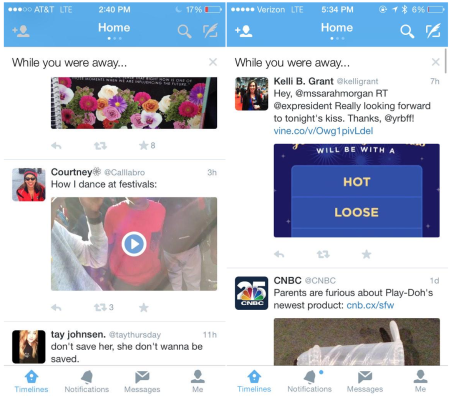 Sadly, the ‘while you were away’ recaps are unavailable through third-party Twitter clients such as TweetBot. The company on its part did not say whether or not it will update its API to bring the feature to other apps.

The universal 21.8-megabyte app supports any iPhone, iPod touch and iPad compatible with iOS 7.0 or later.