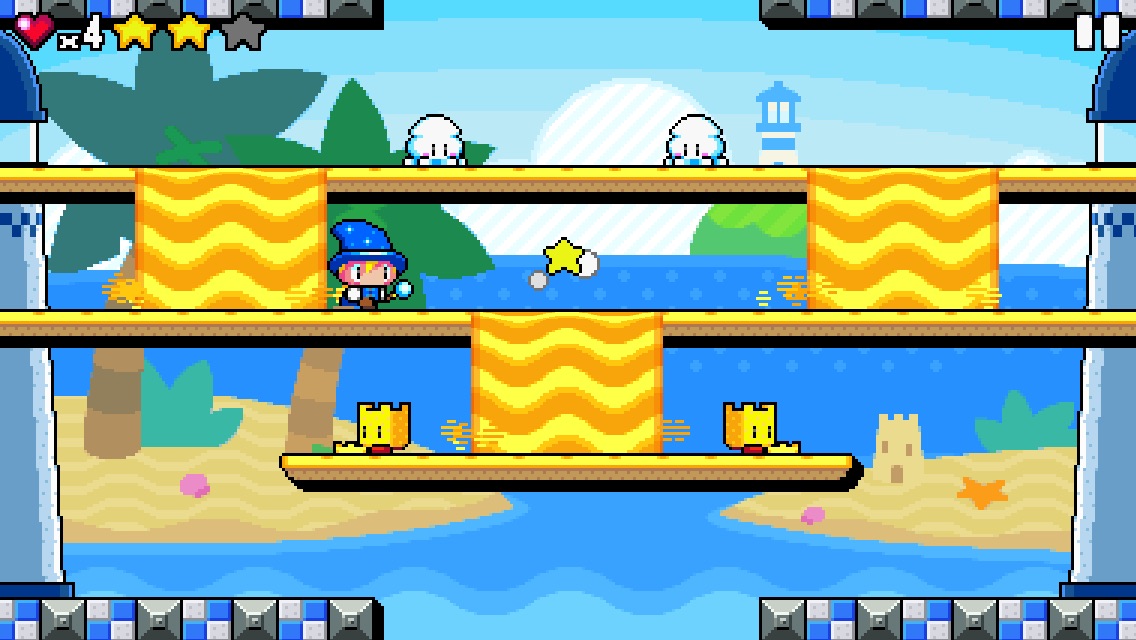 With 16-bit gaming practically a relic, anyone over the age of 25 will look back on such antiquated graphics with fond memories. Some younger gamers will appreciate the simplicity, as well. It’s all about what types of games make you happy.

Drop Wizard seems like it dropped out of 1987. It is a retro arcade game with nicely designed 16-bit graphics and a chip tune soundtrack that will make old-schoolers giggle with delight. We’ve got a full game review of Drop Wizard for you today.

In this retro looking title, the characters are cartoonish and cute. The background is brightly colored and pixelated. It looks similar to late-1980s era Nintendo classics. It even has a quality sound track, complete with chip tune music. The sound effects follow the same format with computerized bleeps, blips, and bops.

The game crosses five different environments, including the woods, the beach, a canyon, a swamp, and a temple. Each environment includes two “acts,” which have about five increasingly difficult levels culminating in a boss at the end. Different environments feature different enemies based on the location. For example, there are beetles crawling around in the woods and sandcastles filling up the beaches.

Players move Teo using a left or right arrow. He walks one direction automatically, and does not stop. So, if you need him to stay put for a few seconds, you’ll have to tap left, then right, then left, and so on, until you are ready to let him loose again.

This game has a tough learning curve, but once you get the hang of it, it really starts to flow. I’m used to being able to shoot whenever I feel like it. In this game, players have to plan the timing and direction of their drops if they want to hit a target. I’m used to being able to jump on up or over objects. In this game, the only way to get to a platform above is to drop into the chasm below. Your wizard will then drop from the top of the screen and you can head back down again. 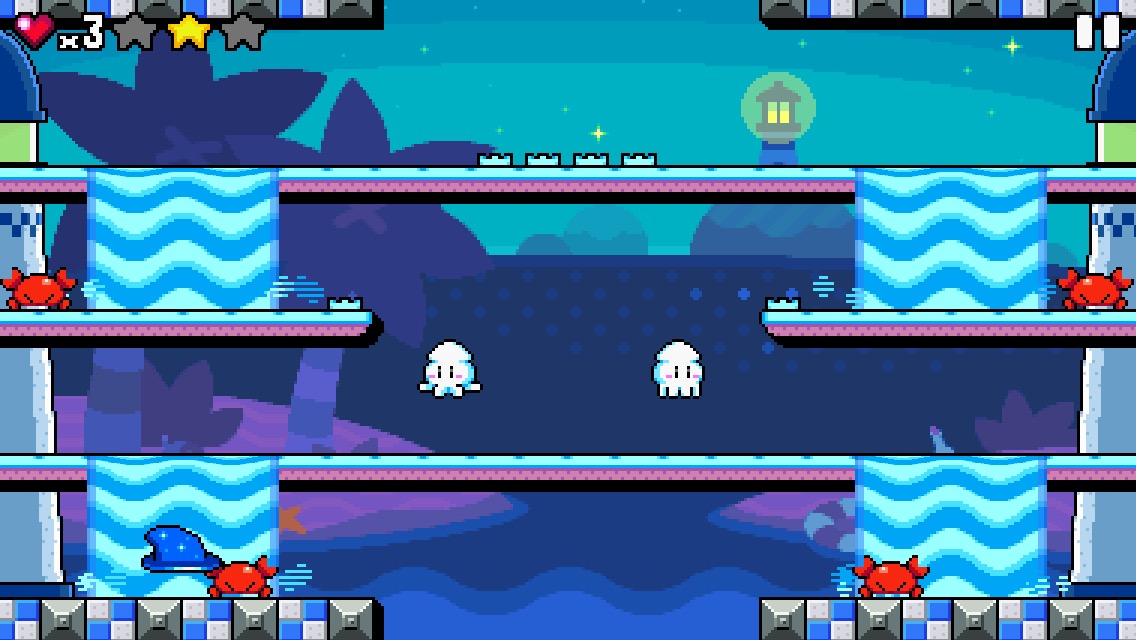 The goal is to clear the screen of all enemies. Each environment has different types of creatures and each act includes creatures that are harder to kill. New environments feature more complex creatures and different obstacles on the screen. For example, the Oceanside levels include quicksand style gaps so you can’t simply drop from one platform to the next. In quicksand, you must tap left and right quickly until you slide downward. Hopefully, you will be facing the right direction to shoot a star at that sandcastle.

Speaking of shooting. As mentioned above, the only way you can defeat an enemy is to first stun him with a star. The only way you can shoot a star at an enemy is to drop from a platform above. So, when you see a creature below, run to the edge of the platform you are on and drop down. Make sure you switch directions (or stay the same direction) to face the enemy. As you drop, a star will shoot from Teo, which will hopefully hit the baddie. This will stun him. Then, run up to the enemy and kick him to start him rolling. If you kick him into a wall and he bounces back, you will destroy him and collect any loot that he has dropped. If you knock him off of the platform opposite your location, he will keep rolling around, knocking over other creatures, creating a huge ball of baddies, which will eventually roll to their end and turn into fruit, which you can collect if you get there in time.

There are a lot of little things that happen to make your job easier and harder. Some bad guys jump and your stars will miss them. Some bad guys roll up and destroy everything else on the board. Sometimes, you’ll fall from the top of the screen and land right on an enemy’s head. Unfortunately, that doesn’t kill the bad guy. It kills Teo instead. It is all of the little things that make the game so much more interesting than a simple drop-to-kill arcade title. 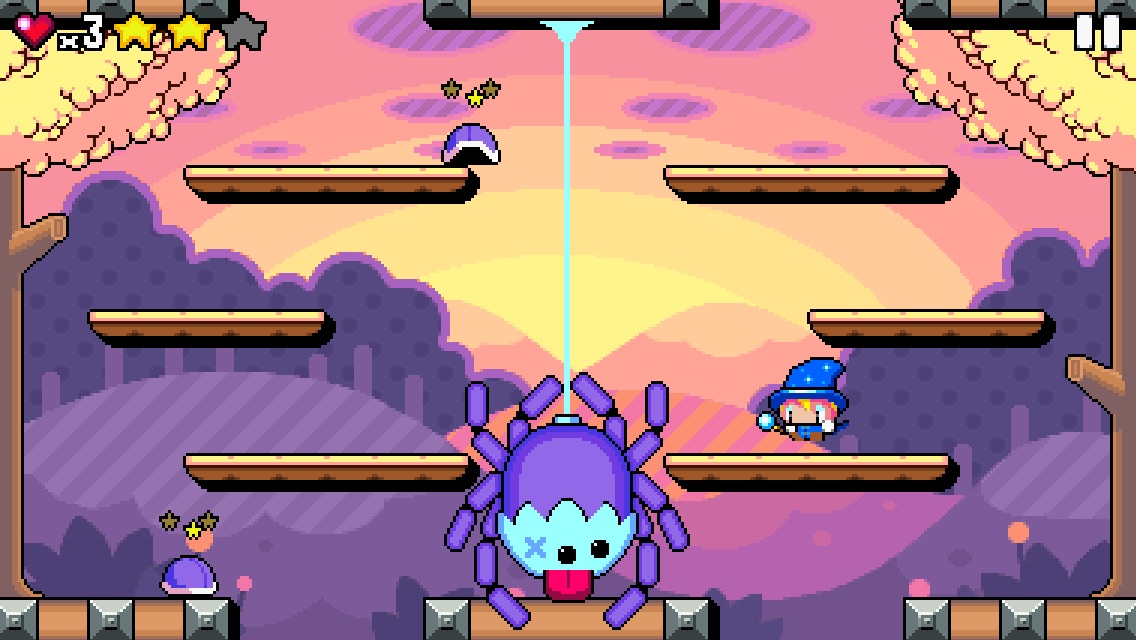 The developer obviously cared for this game and really put effort into the details. This is a very well developed game with plenty going on to keep arcade fans happy. It starts off feeling almost too hard to play, but once you get the hang of things, it all makes sense and the challenges are actually fun.

You start each game with six lives. If you lose them all, you must start back at the beginning of the act. I wish there were a way to start at the last level completed instead.

Drop Wizard is on sale right now for $0.99 [EDIT: The sale has ended]. I would go so far as to say the game could easily cost $1.99 and still be a great price (which is, I believe, the regular price). The replay value is fairly high since you can play levels again in order to earn all three stars, which are located randomly throughout the levels.

Yes, yup, and yeah. I love this game. It is retro arcade awesomeness. I highly recommend it to gamers that like fast action and simple movement controls, but appreciate having to plan ahead to kill bad guys. The fact that you must drop down in order to stun the enemy makes it strategy-based, even though it is fast-paced enough to be a simple arcade classic. This game is available on the iPhone, iPad, and iPod touch. Download it in the App Store today.

Woah Dave!, which is an 8-bit retro arcade game, is a lot like this. However, the attack mechanics are slightly different.

What do you think of Drop Wizard? Let us know in the comments below.