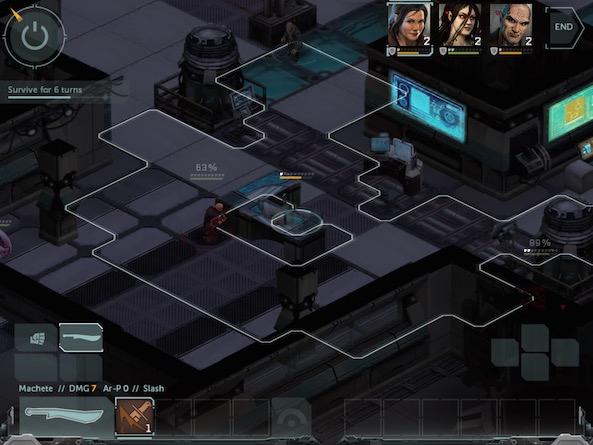 Fans of tactical military turn-based strategy games can step into a future where humans merge with technology to become superhuman. Sprinkle a little magic into the equation and you’ve got a tactical game for every walk of life.

Shadowrun: Dragonfall – Director’s Cut is such a game and features a dystopian future where tech and magic collide, creating the kinds of criminal element you would never wish to encounter in real life. We’ve got a full game review of Shadowrun: Dragonfall for you right now.

This is a complex game requiring a lot of advance preparation before heading into battle-heavy environments. Players choose a character from a variety of options, including gender, looks, race, and class. Then, step into the story as a member of a team that is out to make a buck. Unfortunately, things go wrong and players are fighting for their lives instead of raking in the dough.

You play one member of the team, but control all of them when the fighting begins. When in conversation mode, characters have their own dialogue and you have multiple responses to choose from. When in fight mode, you control the movement and action of each member of the team.

Players are transported to a future where the world is dark and dangerous, and you must do what it takes to survive. The viewing angle is from above and changes from one character to the next. Dialogue boxes appear on the right side of the screen. Players select from a number of response options. The outcome of the story won’t necessarily change based on what you say, but your relationship with the other characters might.

During each round the current character’s movement limit is highlighted. You have a specific number of action points (AP) that you can use in your turn. Spend AP to move, attack, cast a spell, heal, and more.

Your character will be able to perform certain things, depending on what you choose for a class and race. If you are a shaman, you can heal. If you are a decker, you can jack into the matrix to find information through computer programs. 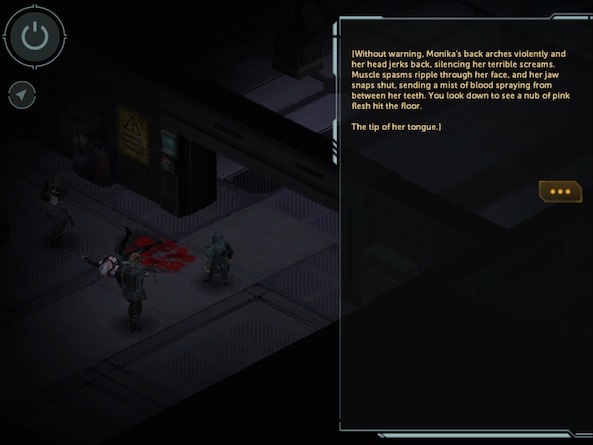 As a new member of your team, your first job is to fit in. When dialogue happens, be sure to respond in ways that will benefit your relationship with others. When the adventure turns into a firefight, your choices relate to where to hide, who to attack, and when to run.
Out of combat, you can walk around in a room and search items. Any item that you can interact with will have a “search” label next to it. Most stuff won’t be particularly important, but some items will offer additional choices for you. Your response will affect what happens next in the game.

In combat, you will be in charge of movement and actions of all members of the team. Familiarize yourself with each of their class abilities in order to maximize their use.

To move in combat, tap the screen to highlight available squares. The best place to move to is one hidden. Each square will include whether there is any available shielding and which side the shielding is for. If you are only partially covered from enemy fire, the shield will be half solid and half outlined.

Once in place, depending on the character’s abilities, you can attack. Ranged weapons seem to work the best in this environment since you can stay hidden and only pop up to shoot. However, melee attacks can be very handy for extra damage.

To attack, select the enemy you wish to damage and select what you would like to do. You can use your default weapon to shoot once, hack with a machete, throw daggers, and other such actions. Those will only cost one AP. However, you can do more damage or hit with more accuracy if you use one of your special abilities. Those take more AP, and have a cool down period, so they can’t be used every time.

Your entire team will move and attack, and then it will be the enemy’s turn. Bad guys will pretty much do the same thing you do – chase, hide, shoot, heal, etc.

The game is made up of a number of missions that you must complete. If you succeed, you will move on to the next mission. If you fail, you must restart from the last save, or replay a level. There is more than 20 hours of campaign, so you’ll be in the thick of the battle for the long haul. 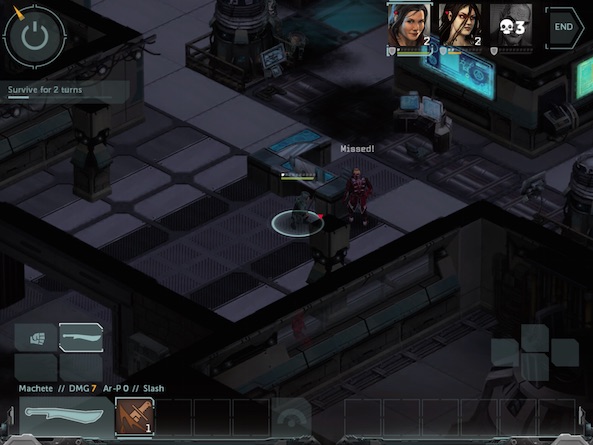 This is a deeply structured game that requires a lot of advanced planning to know how to play. However, if you don’t want to take the time to read the fine details in the how-to section, you can still figure many things out without it.

Even in easy mode, I struggled with combat. There were some items I could not figure out how to use. Or, if I did, it was too late and I’d lost my chance. I’d like to have an in-game tutorial for the first combat scene in order to learn some of the details, like how shielding works or how long spells last.

Shadowrun: Dragonfall costs $6.99. For the depth of gameplay, the price is about right. The replay value is very high since you can take turns with a number of different classes of characters. Each new class will produce a different team for you to control.

This game is not for newbs. If you’ve never played a turn-based tactical strategy game, you might want to start with something a bit easier. Fans of the genre may have already been playing the Shadowrun series. This game is in line with previous titles. If you are into sci-fi cyborg style futures mixed with fantasy style characters and magic, take a closer look at this one. It is available only on the iPad. You can download it in the App Store today.

The same company has an earlier game in the series on iPad called Shadowrun Returns. You can get sucked into the entire Shadowrun world.

What do you think of Shadowrun? Let us know in the comments below.