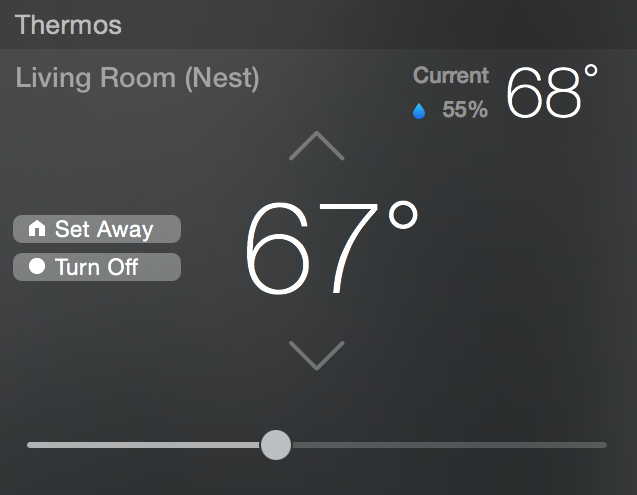 A couple weeks ago, I told you about Thermos, a widget for Notification Center on Mac that lets you adjust the temperature of your Nest thermostat. At the time, I was quite impressed with the widget, despite the fact that I felt it was a bit limited and contained a minor bug. This is now a thing of the past as Thermos was just updated with new features, and a fix for the pesky bug.

My main grip with Thermos was that prior to today’s update, the app wouldn’t let you turn your Nest On or Off, only allowing you to control the thermostat when it was already on. Thermos version 1.1 improves on that as it now adds support for turning your Nest Thermostat on and off from the widget. Additionally, this update comes with several features that are much welcome, specifically, the ability to switch between Home and Away from the widget, and the ability to switch between Heat or Cool.

Maybe most important, this little bug I experienced has been squashed, as well as a few others, which I didn’t encounter myself in the previous version.

Now you’re going to think that I’m picky, but despite the fact that this update was much needed, I think it has visually degraded the esthetic appeal of the widget. The Away and On/Off buttons are too big to me and don’t really fit there. The humidity icon is nice to have, but also adds too much to this widget. If I had my ways, I’d make the humidity icon optional in the Settings, and I would redesign the Away and On/Off buttons. Maybe simply having icons (no text) and moving them out of the way would give this widget the simplicity it once had.

All in all, this is a great update that solidifies this widget and makes it a must-have for anyone who owns a Nest. I highly recommend it.

Thermos is available in the Mac App Store for $1.99.