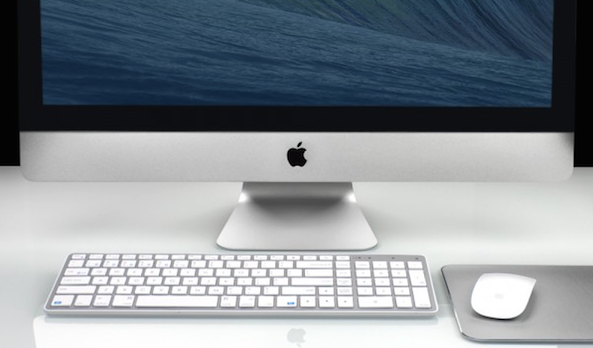 Apple only produces a small wireless keyboard, which is frustrating for users that require the benefits of a full sized option. Using an Apple wireless keyboard for home use is usually manageable. However, using a reduced keyboard in the office is more of a struggle. The lack of a number pad is extremely complicated when entering digit data and the like.

Why Apple is yet to produce a full size, Bluetooth keyboard is beyond understanding. Third party companies are starting to enter the space with designs that compliment Macs. For several years, Logitech and other companies offered wireless keyboards, but they are bulky and clash with Apple’s aesthetic. Satechi’s Wireless Smart Keyboard is filling the gap.

The look and feel

The keyboard measures 15.6″ x 4.8″ x 0.7″ and weighs one pound, where 0.7 is the thickets part of the device. Utilizing 2 AAA batteries, the Bluetooth distance is standard at about 33′. The keyboard is standalone “island” style keys, mimicking standard desktop keyboards. Typing seems to take some extra pressure, but after adjusting over several days, the strokes seem natural. They keys are thin and flat, which Satechi argues makes for a more natural and quick typing surface.

I prefer to use the keyboard with the two back legs propped open, providing a more easily accessible upper row. The top row matches the function keys on a standard keyboard, with controls for Mission Control, Exposé, brightness, music play board, and volume. Additionally, iOS keys are included for the Home button and Spotlight search. What I would like to see added is a button for Launch Pad, which I frequently use on my Apple keyboard.

Using the keyboard is a little frustrating as the spacing is all uniform. As shown above, all keys exist in a fairly strict gridded pattern. This becomes difficult when trying to tap the arrow keys or feel out the number pad. The only way to become fluent on a keyboard is muscle memory. Because the keys are uniformly spaced, it is quite difficult to blindly hit all of the correct keys. A larger keyboard would offer more spacing and an easier learning curve, but would take up more desktop room.

Connecting the keyboard to USB devices is simple, but only after I read the directions. There are a couple of keystrokes required to make it connect correctly. Once explained, it made sense. For a walkthrough, take a glance at the user manual. Once trained to multiple devices, simply tap the corresponding Bluetooth key, numbers 1 – 5, and the keyboard switches. The time for the switch is the same as any other Bluetooth connection, about two seconds.

At $54.99 via Amazon, it is a pricier model. The construction is sturdy, but all plastic, despite an aluminum look. I like the way it matches the aluminum chassis of Apple computers better than some competitors, but do not be fooled by appearances. Having a keyboard that connects to multiple devices is excellent, especially with an iPhone, iPad, and Mac sitting in front of you. Quickly responding to items on each device is highly simplified.

If a small footprint, Apple appearance, multiple devices, and wireless setup are your preference, give the Satechi Bluetooth Wireless Smart Keyboard a try! Just know, the keyboard layout may take some extra getting used to over a period of time.