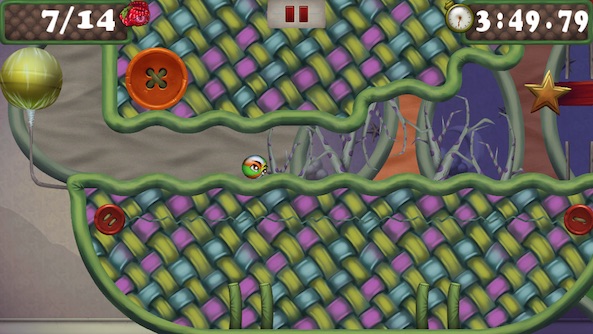 I’ll be the first to admit that I am not the biggest fan of tilt-based games. I am of the opinion that video games started out as stationary cabinets and we are messing with the formula when we add different control mechanisms.

Bounce On Back is a tilt-based platformer game, but it is way more fun than I thought it would be. Plus, if you really hate the controls, you can opt for a D-pad instead. We’ve got a complete game review of Bounce on Back for you today.

The story is set on the playground of the Apricot Smiles Day Care Center. Your protagonist is a red rubber ball. The villain – a voodoo doll. Players roll along a cartoonish world with quilted mountains and basket weave platforms that are peppered with hand-stitched buttons.

The steep inclines make it easy for Bounce, the red rubber ball, to get up enough momentum to jump up to high platforms, but the fact that he is a ball makes it just as easy for him to fall right off of those platforms.

The game’s courses are traditional platform style landscapes. Players jump from one to another, avoiding spikes, or in this case broken glass, and collecting items along the way.

In default mode, players tilt their device to move Bounce left or right. Tap the screen to make him jump. Touch and hold the screen to make him jump high. If tilting is not your bag, switch to the D-pad controls in the settings menu. A stitched-on button will appear in the lower right corner of the screen. Press down on the button the same way you would the cross pattern of the D-pad, The button will move around on the screen in the direction you are pressing.

Different levels offer a variety of new elements that keep the game interesting. On one level, Bounce turns into a beach ball so he can float across large bodies of water. On another, you get to shoot him out of a cannon. 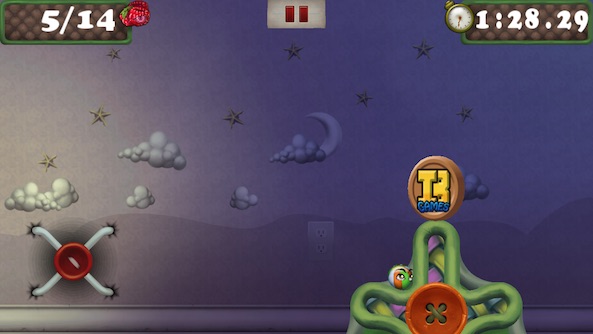 The plot to the story is that the evil Voodoo has been causing mischief at the Apricot Smiles Day Care Center. He’s been steeling the giggles from children for some magical spell that makes him more powerful. Your job is to find all of the giggles in order to weaken and ultimately destroy Voodoo. There are two different ways to find giggles. You can collect a specific number of raspberries in order to reveal a giggle, or you can explore the greater world to find hidden ones.

Each level is filled with raspberries. You don’t have to find every one of them, though. You’ll only be tasked with finding the designated number. Once you do, a giggle will appear in place of the next available raspberry.

Once you find a giggle, you will be transported away from the level, whether you’ve explored the entire course or not. You can go back to the same level and play again, or move onto the next one if you have enough giggles to move on. You only need one giggle per level to progress, but if you have found more than one on a level, you can skip ahead.

In addition to the typical spiky platforms and bottomless chasms for players to avoid, there are a couple of baddies that will make your life a little harder. Flying vulture-like birds will pop you in mid-air and some kind of Koopa style marcher will get in the way when you try to land on a distant platform. The bouncing frogs are the most destructive as they are hardest to avoid and kill.

You can kill bad guys by jumping on them. It isn’t as easy as it sounds. Surprisingly, Bounce doesn’t have very good aim. When you take off into the air to crush your enemy, you’ll struggle to aim for the moving target as you slowly fall back to the ground. One of the reasons may be due to the fact that Bounce does not follow the laws of gravity. He bounces around more like a slightly deflated balloon. He gets height fairly quickly, but takes time coming back to the ground.

I’ve only made it to level seven, but I believe there are about 60 of them. You can replay levels over and over again until you find all of the giggles, so I’ve spent way more time replaying than progressing. 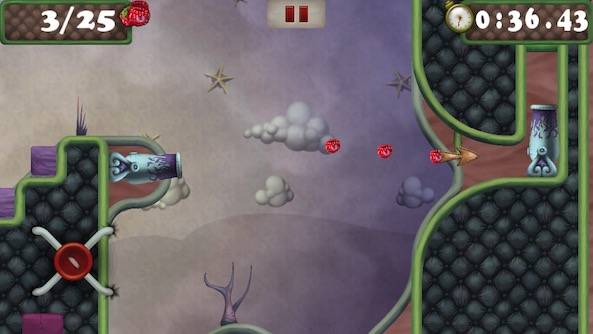 I love how the game is set up to take you out of a level once you find a giggle. It makes me want to replay it to find every giggle instead of moving onto the next one. There is something about exiting the level that makes me come back for more.

I found the tilt controls to be surprisingly easy to use. There are some levels with element that make more sense with tilt controls. Even though I switched to the D-pad, I found myself tilting my iPhone anyway.

The D-pad does not work very well. The game was developed as a tilt control game, so it doesn’t surprise me that the D-pad has issues. I noticed that Bounce would jump instead of roll sometimes. Plus, moving around just wasn’t as comfortable as tilting.

Bounce On Back costs $2.99. For the amount of gameplay, the price is completely appropriate. The replay value is high since you will want to go back to play levels over and over again until you find all of the giggles. Plus, there are hidden special items that make you want to keep digging around the entire course until you’ve turned over every nook and cranny.

Fans of platform games should take note. This title is interesting and fun and requires you to hone your jumping skills. It is specifically dedicated to tilt controls, even though there is a D-pad option. So, if you don’t like tilt mechanics, you should keep it in mind. This game is available on the iPhone, iPad, and iPod touch. Download it in the App Store today.

You can complete the series by adding Bounce On and Bounce On 2 to your collection.

What do you think of Bounce On Back? Let us know in the comments below.