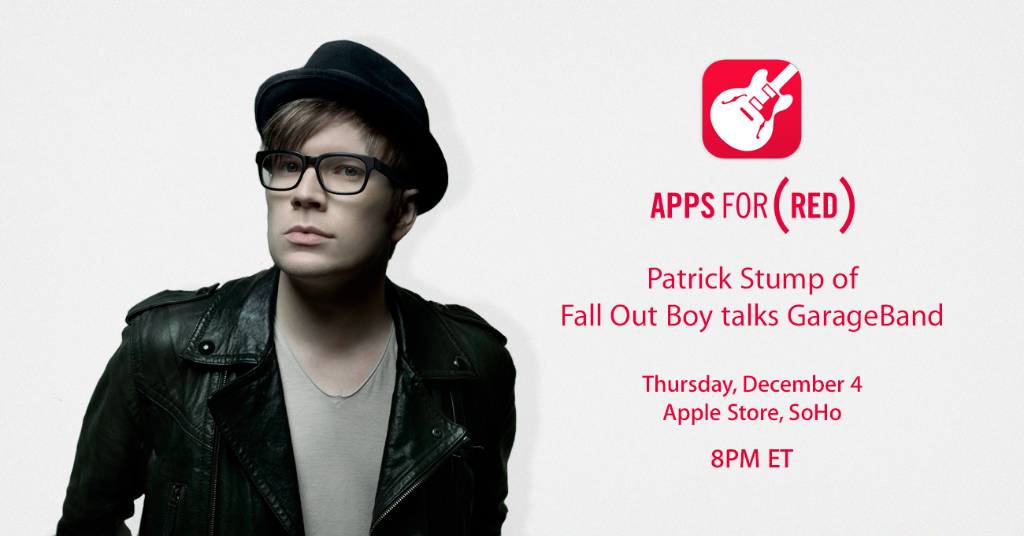 Apple announced that it will be hosting Fall Out Boy’s Patrick Stump at its Apple Store in SoHo New York, as part of its Apps for (RED) promotion to benefit the fight against AIDS in Africa.

In a tweet from its App Store account Apple provided the details for the event. It will take place on Thursday, December 4 at 8PM EST. Apple is requiring customers/fans that want to attend the event signup through the Apple Store website.

It doesn’t sound like the event will be a concert, sorry Fall Out Boy fans, rather a gathering to talk about how GarageBand has been incorporated into Stump’s career.

GarageBand is one of the apps that has been a part of Apple’s 2014 promotion for Product (RED). Apple has worked with Product (RED) in the past, but is doing things big this year by running a huge promotion on the App Store where several apps are now free. Furthermore, Apple gave away free gift cards with the purchase of select products on Black Friday as part of the (RED) campaign.

If you’re in the New York City area, this should be an event worth checking out – whether you like Fall Out Boy or not. The SoHo store has seen several meet and greets in the past, including today, where Seth MacFarlane from The Family Guy and composer Joel McNeely talked their new Christmas album called “Holiday for Swing!” with fans.

Send us pictures of the event on Twitter, @iDownloadBlog.