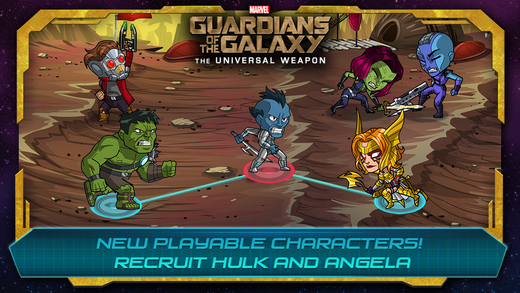 Lost in the sea of Black Friday holiday deals and discounts on tons of Mac, iPhone and iPad apps and accessories, Guardians of the Galaxy: The Universal Weapon is now available at no cost through Thursday, courtesy of Apple’s ongoing Free App of the Week promotion. That’s a savings of $4.99 for the iPhone and iPad download.

The game features cartoonish visuals, familiar characters like Star-Lord, Rocket, Groot, Gamora and Drax, in addition to piles of unlockable ones such as Beta Ray Bill, a story co-written by comic-book scribe Dan Abnett and much more.

I know what you’re thinking so I’m happy to report that there are no In-App Purchases in this game and no Internet connection is required to play.

The most recent update has brought out new playable characters (Iron Man, Quasar and Vance Astro), a new Collections system, a Regroup Powerup feature and more.

The game should appeal to the fans of the genre and anyone interested in Marvel’s hero games. Release back in July, this marks the first time it’s gone free.

The 77.7-megabyte download is compatible with the iPad, iPod touch and any iPhone from the iPhone 4s onward. iOS 7.0 or later is required.

Grab Guardians of the Galaxy: The Universal Weapon at no cost until Thursday, December 4.