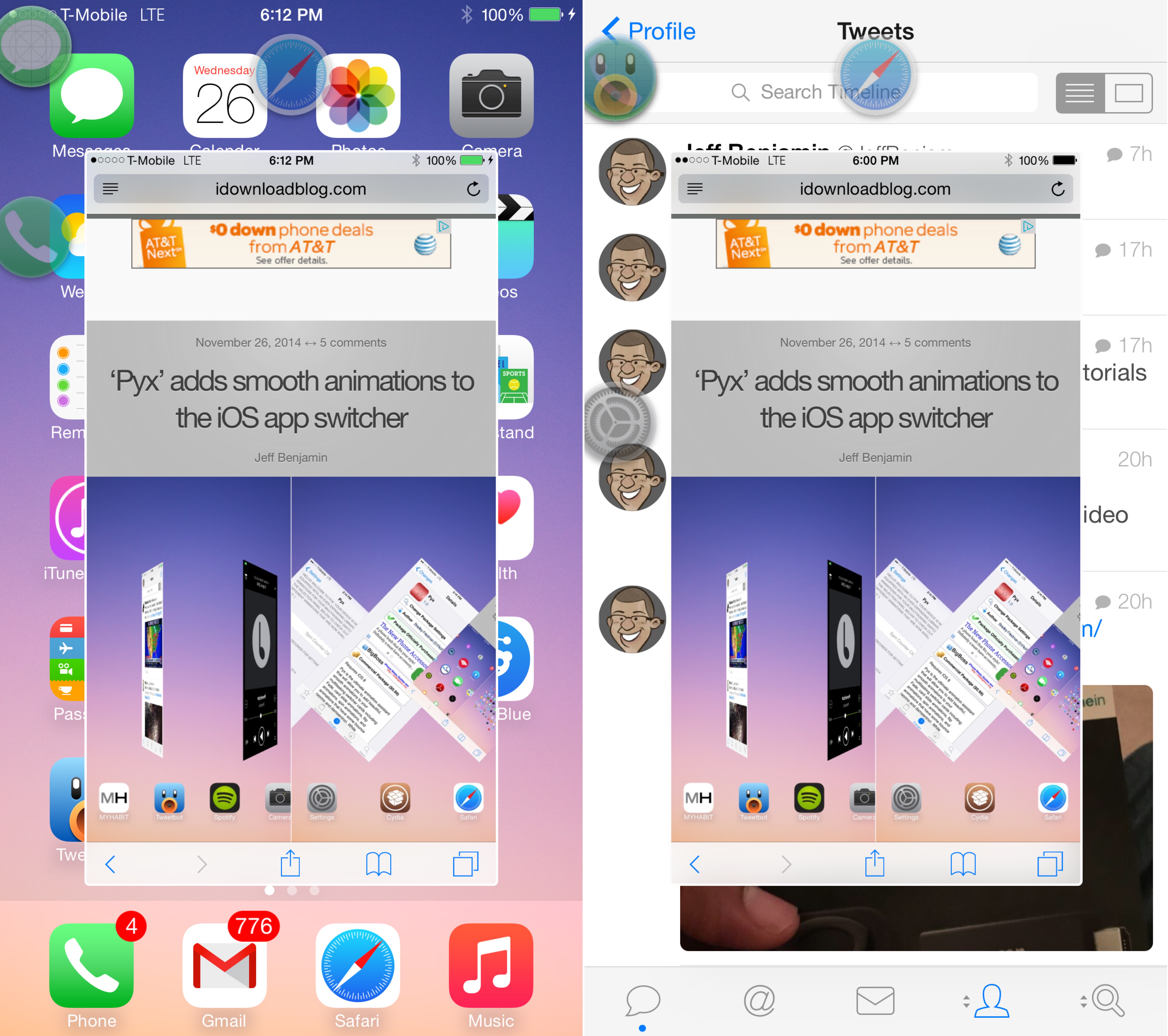 AppHeads, the tweak that brings a fast multitasking experience to iOS7 and iOS 8, is now available for download on Cydia’s BigBoss repo. Inspired by Facebook’s ChatHead system, AppHeads brings a fresh and new multitasking method to iOS.

We’ve already previewed the tweak once before, and now it’s available for purchase for $4.99. Is it worth its relatively steep asking price? Does it live up to the hype and potential? Check inside for the video walkthrough and review.

Once you purchase and install AppHeads, you’ll find a pop-up notification that will ask you to install the license, which downloads automatically. Installing the license is a painless affair, and will (hopefully) help eliminate any piracy that’s bound to be tried with a popular and pricey tweak like this.

After the license is installed, you can begin using AppHeads immediately. Launch an app, and you will see an app icon appear—the AppHead—representing the launched app. This icon can be moved and snapped anywhere on the left or right perimeter of the iPhone’s screen.

Tap on an AppHead to launch what its developer calls the Live View. Live Views are just as they are described, live snapshots of an app that can be interacted with. What makes Live Views so compelling is that you can quickly open and dismiss apps while working with other apps. That’s because the AppHeads for all running apps are always displayed around the left and right edge of the screen. It’s a unique way to multitask that breathes some fresh air into iOS’ aging multitasking concepts.

While that’s great, and can in theory speed up the process of multitasking, it must be noted that you can only interact with one app at once. Even though AppHeads’ Live Views give you the option of placing a Live View on top of another app, you can only interact with the Live View app, and can’t interact with any app beneath it until you close the Live View. So in essence, AppHeads tread more on the “handy shortcut” side of the multitasking fence, as in they allow you to quickly switch between apps. They don’t allow for true multitasking, which has been a point of confusion from some would-be users. 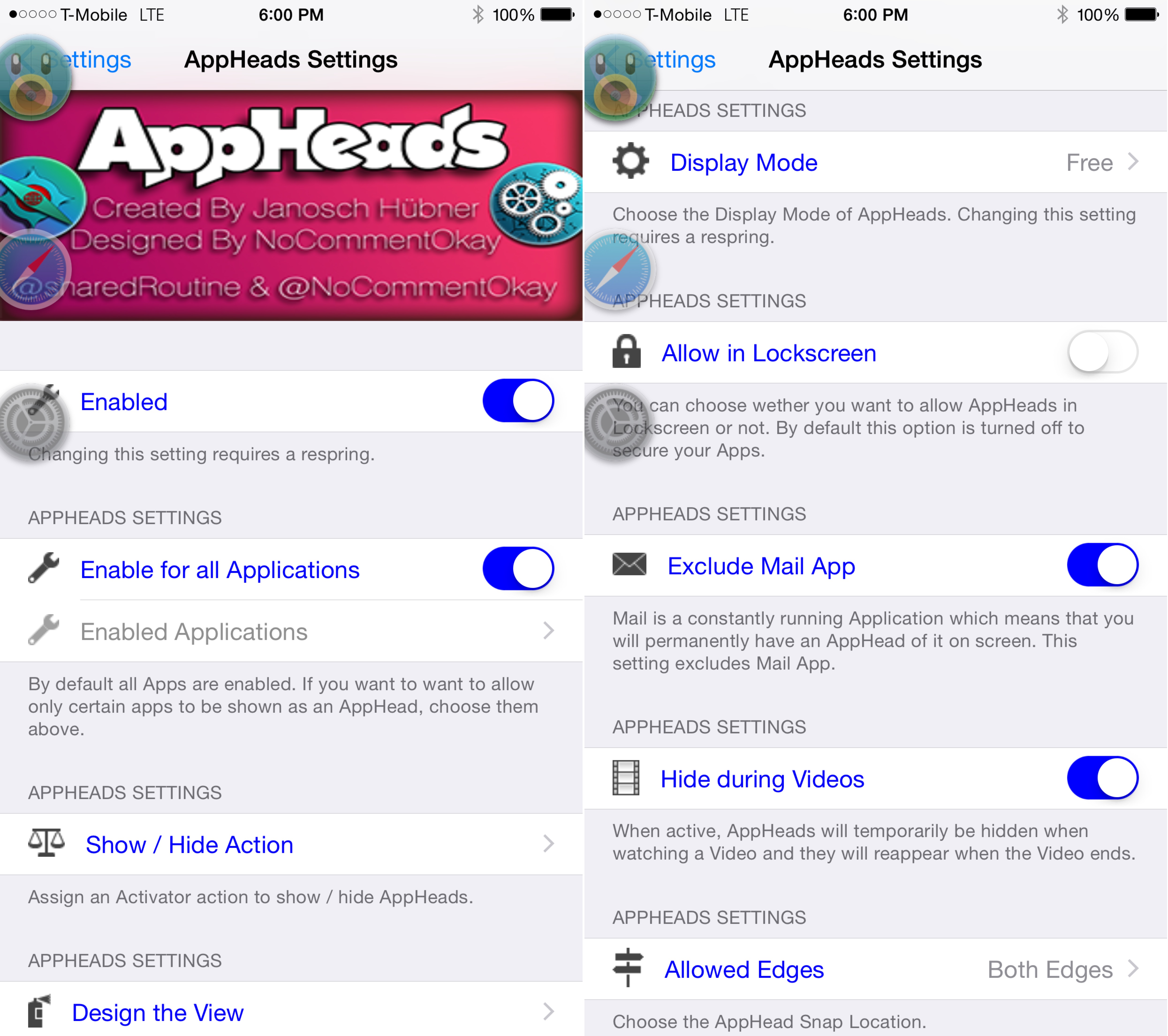 Then there’s the design aspects of AppHead’s preferences. You can change up the way that Live Views are displayed by customizing their backgrounds, size, radius, width, and border color. Impressively, all of these design aspects for the Live View take place without necessitating an annoying respring.

There are other settings that I’ve yet to mention, like the single tap action that allows you to specifiy what happens on a single tap of an AppHead, and hold actions, which do the same, but for tap and hold gestures. You can make the single tap action show a Live View or launch the full application. The hold actions can do the same in addition to closing a single app and closing all applications.

Then there’s Touch ID settings for the Live View. For users with Touch ID enabled devices, you can force certain apps to request Touch ID authentication before showing a Live View.

As you can see, there are tons of options included in AppHeads, but most of them don’t drastically change the functionality enough to make the tweak’s preferences a must-visit. Out of the box, you can use AppHeads just as well.

The real question to me is this: Is AppHeads worth its $5.00 asking price? In a world of five and six dollar lattes I want to say yes, but realize that not everyone will adore this tweak, or won’t regret their decision to purchase.

For starters, AppHeads, being a 1.0 release, still has quite a few bugs, some of which you will see in my video walkthrough. Then there’s the matter of whether or not the tweak was ever practical to begin with.

As much as I personally want to like AppHeads, I have a hard time believing that I will work this into my permanent daily workflow. It’s an impressive tweak, no doubt, but the fact that it just makes multitasking faster and doesn’t bring any “true” multitasking elements to the fray leads to pause.

With that said, if you’re someone who has the disposable income and who won’t miss the $5, then AppHeads is an incredible tech demonstration to show off to your friends, and it certainly is faster than invoking the app switcher in iOS.

If you’re looking for one of the fastest ways to multitask on your iPhone, then I say go for it. You’d be hard pressed to find a faster way to multitask in iOS, even if it is at the expense of aesthetics, and even if it doesn’t bring any uber-interesting multitasking features to the party.

You can find AppHeads right now on Cydia’s BigBoss repo. What do you think about it? Will you be taking the plunge?