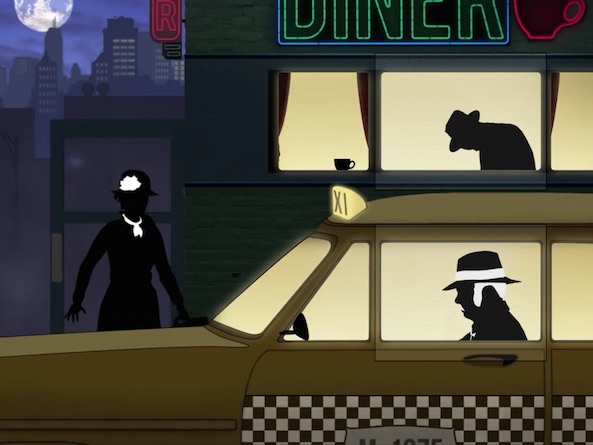 I love when new games come out that completely defy their genres. It’s not that I don’t enjoy traditional games, but titles that break from the norm are bold, brave, and refreshing.

FRAMED is one of those games that is unique enough to feel like a whole new genre, but work within the context of familiarity so as not to scare you away. We’ve got a full game review of FRAMED for you today.

The game is set in a few different locations, including the insides and outsides of buildings. The main character, as well as all interactive characters, are all shadowed in black, reminiscent of the opening theme to some 1960s spy television show (think Mad Men, but with an espionage theme).

It is as if you are storyboarding a movie, or even creating a comic book. Someone else has drawn the panels, but it is your job to turn it into a story.

The entire screen is made up of a number of frames. The first and last frame are always stationary, but many of the ones in between can be moved around by dragging and dropping them or rotating them.

Then, players watch the sequence play out to see if their spy has been caught by police, or made it through without being seen.

The soundtrack is jazzy and fits with the theme, which is definitely a noir style adventure. 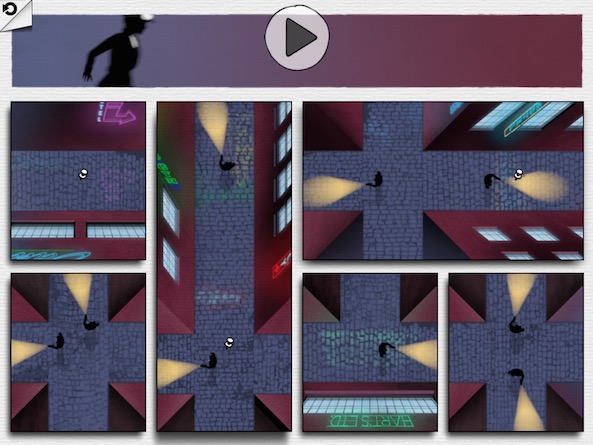 The goal of the game is to reorganize a series of panels so that your protagonist does not get caught by the police. In order to accomplish this feat, players must move frames around so that the sequence allows the main character to sneak past, avoid, or knock out his would-be captors.

As soon as a new page loads, it will begin playing. Watch what happens to your secret spy to see which frames should be switched around. In one frame, you may notice that the cop sees your character because he runs in from the right side of the panel. Switch them around so that your character runs in from the left side and he will either sneak past the cop, or give him a good lump on the head.

As the game progresses, the puzzles get more complex. It becomes harder to distinguish which panels take you down the correct path. Sometimes, panels are pinned on one side. These frames can’t be reorganized, but they can be rotated. Turning a panel 180 degrees might just make all the difference to your success.

Throughout most of the game, you will be in control of a black hat and duster-wearing secret agent. However, there are a handful of scenes when a smartly dressed woman is carrying the torch, or briefcase in this scenario.

Throughout most of the game, whenever you’ve used a panel in a scene, it will turn gray, indicating that it can no longer be moved. However, one of the later features is that panels can sometimes be used again once the running character is out of it. This makes the puzzles even more complex than ever. Not only must you figure out what order the panels must be displayed, but now you must figure out which panels should be place back into the action and when. 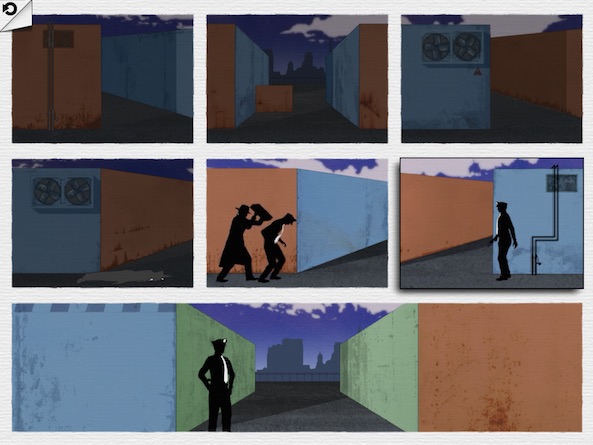 This is an incredibly unique title with interesting gameplay. It looks good with black-and-white illustrations covering muted pastel tones. It is simply a puzzle game, but asks players to think outside the box by moving those boxes around in order to complete the challenge.

The game is definitely too short. It only takes about an hour or so to play the whole thing.

You can’t go back to play a previous level. There isn’t even any way to get to the main menu. You open the game to the last-played page and continue from there.

FRAMED costs $4.99. I can’t go on without commenting on the premium price. I can see that the trend in gaming is leaning toward either higher priced apps or free apps with in-game purchases. This is obviously in the former camp. However, for the price, and with basically zero replay value, the developers are asking a lot from gamers in this newly changing cost environment.

The truth is, FRAMED is a very good game that has been well thought out and nicely executed. If it were on PC or a console, the price tag wouldn’t even be an issue. However, right now, mobile gamers expect low-cost high-end titles. Personally, I think it is worth the price, even for only about an hour’s worth of game play, but keep in mind that you won’t be replaying it over and over again for the next two years. If you are the type of person who thinks any game over $0.99 is too high, you won’t be happy. However, if you believe in investing in a game development company that provides top-quality titles at a premium price, you won’t be disappointed. This game is available on the iPhone, iPad, and iPod touch for $4.99. Download it in the App Store today.

It is a bit like Hitman GO. Ghost Trick has a similar vibe. However, neither have the same panel organizing mechanic.