In October, Fitbit announced that it had no plans of integrating its activity trackers or software with Apple’s Health app. This means that if you have a Fitbit Flex or other device, the data it gathers will not be shared with Health, crippling its attempt to be your fitness data dashboard.

But a new app launched this week in the App Store that aims to change this. It’s called Sync Solver, and it allows Fitbit wearers to track all of the important data collected by their wearables within the Health app, without ever having to use the standalone, dedicated Fitbit application.

Here are all the data types the app supports: flights of stairs climbed, walking and running distance, weight, body fat percentage, body mass index, sleep analysis (both in-bed and actual sleep times), and dietary, resting and active calories—some of which are input into Fitbit manually. 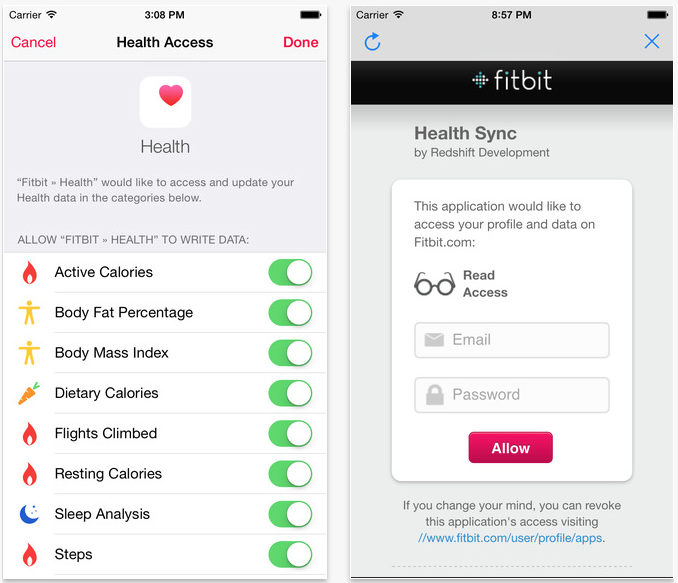 As you’d expect, there are some caveats to the app’s workaround. Once your device connects to Sync Solver, it will only sync data from your Fitbit every 24 hours. The developer also warns that since there is no way to disable step counting from the iPhone, you’ll likely see double entries.

Still, Sync Solver is certainly better than Fitbit not syncing to Health at all, and most of the other workarounds. I’ve tried using IFTTT (If This Than That) recipes that auto-sync Fitbit data with the standalone Jawbone UP app, which syncs to Health, and have gotten very mixed results.

If you want to check it out for yourself, you can find Sync Solver in the App Store for $0.99. It’s an interesting app, and one that may be necessary for a while. With Apple pulling Fitbit from its stores, and on the verge of launching its own wearable, I don’t see this feud ending anytime soon.