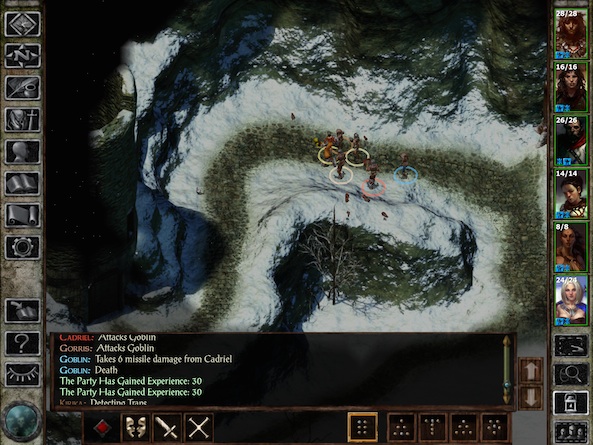 Icewind Dale came out 14 years ago on Windows computers. In 2000, I still hadn’t even begun playing Dungeons & Dragons on a regular basis, so this title slipped past my view for many years.

Icewind Dale: Enhanced Edition recently launched on iOS and it features all of the familiar settings of the Forgotten Realms, plus includes a few new spells, text options and other enhancements that bring the game to life in the mobile arena. We’ve got a hands-on game review of Icewind Dale for you today.

The graphics are very similar to what you would find in point-and-click games of the early 2000. Don’t expect to see polished, glossy characters, but the world is still expansive and epic and completely immersive for today’s mobile gamer.

The story is set in the world of the Forgotten Realms and is based on the second edition rule set of Dungeons & Dragons. Just because you’ve never played D&D before, does not mean you won’t enjoy this game. It is story heavy, but also includes enough battle fury to give you a rush. The entire game relies on your desire to interact with other, non-player characters in order to learn about the history of a town, find out clues to solving mysteries, and complete mini quests along the way.

Players can start a campaign with five characters, which they can fully customize or allow the random character generator to create. Even after the game has started, you can change the appearance of each of your adventurers, and even select a specific script that will allow them to perform certain tasks, even when not engaged in any activities.

During the game, you’ll be able to move your party as a singular group, selecting one member as the leader, or send different adventurers along different paths. You can set how you want the group to line up in battle, assign a specific action to a particular character, and have different conversations, depending on who is talking.

On the main screen, the action takes place on the display screen with all of your available options listed on the left side of the screen. The characters you have in your party are listed on the right side.

You can access the area map, check your current and completed quests, equip items and move inventory, customize characters, learn spells, and save the game. Adjust the level of difficulty from the save menu if the game is too hard or too easy.

You can find out details on how to play the game from the home screen. It includes mini tutorial movies to give you a visual understanding of the mechanics. 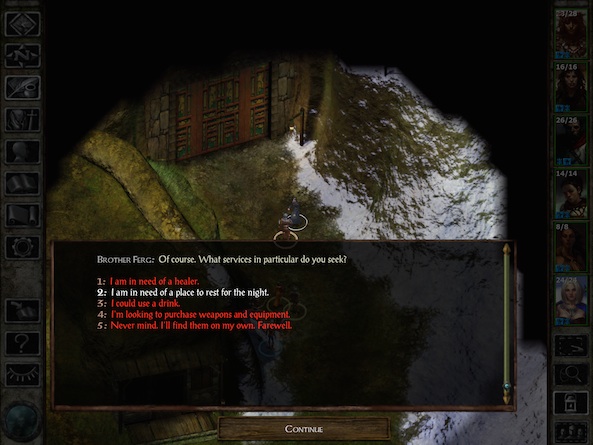 As noted above, the game is set in the Forgotten Realms world of Dungeons & Dragons. Players start a campaign by selecting six party members. You can choose which ones to bring on the adventure, or let the random character generator do it for you. If you customize your party, be sure to have a well-rounded team that includes a tank, a ranged fighter, a melee fighter, a spell caster and a healer.

The game begins with a two-minute story intro, often called “flavor text,” which tells the player why they are in this particular town and what has happened so far. Then, when the game begins, you must explore the settings around you to discover what to do next. Highlighted characters will have a colored circle around them. It is best to keep the group together as much as possible. A wandering bard may end up in a dangerous situation with no help from the fighters.

You can set the hint feature to help you find characters to talk to and doors to open. Tap the search icon in the lower right corner to see all available options. Select an item on the screen to interact with it. You can unlock and open doors, open chests, go up or down stairs, and more.

If you wish to speak to a character, tap him or her and your party’s leader will do the talking. The game is heavily based on this type of interaction. Townsfolk will tell you where to find certain places. Named characters will have deeper insight into the story’s plot. Some characters have main missions for you to complete, while others have smaller side quests that will earn you experience points.

Some quests involve battling enemies. This is where things can get tough if you don’t know how to assign your characters to specific actions. I failed to beat a horde of goblins over and over again during my first encounter because I had not yet watched the tutorial movies. I highly recommend players take a moment before starting to learn basic magic and melee combat. You can pause the game during a battle and reassign characters to different tasks.

Even after studying the combat tips, I still had a difficult time getting through the Kulduhar Pass and had to set the game’s difficulty level to the lowest, which meant that none of my characters would die from their wounds. The cool thing about this difficulty meter is that it can be changed at anytime throughout the game. So, if you can’t beat a horde of goblins, lower the difficulty for that battle and bring it back up when you’ve made it through.

The game also includes a multiplayer options where players can either host or join a larger party with other players. To join a game, tap the Multiplayer button from the home screen and select an active game to join. To create a game, select “Create/Load Game” from the same widow and create a session name and password if desired. You can even create LAN based games with friends that are on the same network. 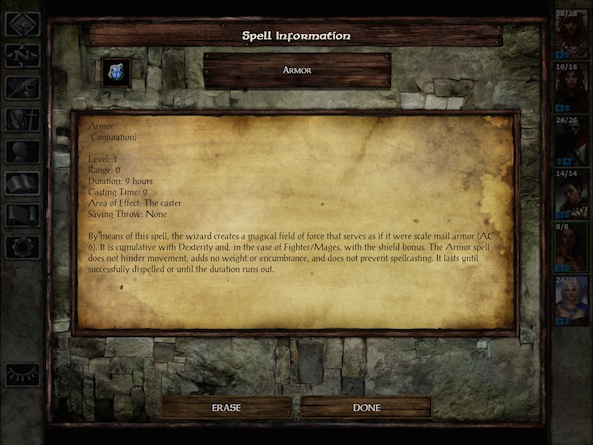 I have been playing D&D for well over a decade now. I get together on a regular basis with a group of friends to play hours of tabletop fun. However, the older we get, the harder it is for all of us to get together. Some friends have started families. Others have moved away or have more responsibility to their jobs. This game makes it possible to experience a role-play heavy game; complete with the kinds of tasks and conversations I might have with a real life dungeon master, without having to ask my friends to join me for six or more hours.

There is no in-game tutorial. You are not given any kind of how-to for selecting party members, talking to NPCs, or leveling up characters. Although the game is 14 years old, it doesn’t mean that everyone has already played it. A better tutorial would help newcomers join the game without feeling intimidated. I’d hate to imagine that people think of D&D gamers as elitists who don’t want others to learn how fun the genre can be.

Icewind Dale: Enhanced Edition costs $9.99, which is cheaper than Baldur’s Gate II, but the same price as Baldur’s Gate, all of which are part of the same D&D collection. The price tag may turn some people off, but only those who don’t know the value of having this game on iOS. The same title costs twice as much on PC and Mac. The replay value is high, since you can play the game with different parties and join up with other real-life players in multiplayer mode.

If you’ve played Icewind Dale in the past, you probably already own it on iOS at this point. If you are a fan of D&D, but don’t know if the price is worth it, it is. You’ll be immersed in the game’s story right from the start. Just remember to watch the tutorials before venturing out into the forest. If you don’t know anything about this game or the genre, you might still have fun playing the game if you are into role-playing adventure games. However, at the premium price, and without a tutorial designed for “noobs,” you may end up frustrated and confused. This game is available on the iPad, iPhone, and iPod touch. Download it in the App Store today.

They have different mechanics, but there is some similarity between this and Warhammer Quest.