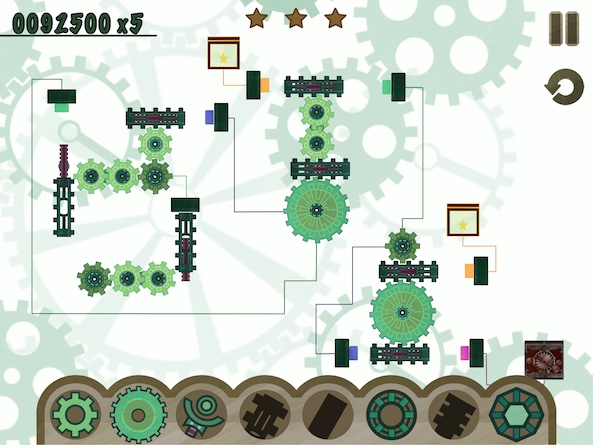 A Mechanical Story is nothing more than a puzzle game, but it is set in the world of engineering workings. I was intimidated at first, seeing all of those spinning gears. But in the end, it is simply a fun puzzle game and nothing to be afraid of. We’ve got a game review of A Mechanical Story for you today.

As mentioned above, the game’s theme is mechanical. Each puzzle shows a sort of schematic layout of bearings, bolts, and connecting rods. On each level, there is at least one spinning gear, but there may also be two or three. There are also buttons and wires that trigger boxes that will open when activated. Your goal is to open the box with a hidden set of parts in it. By the time you’ve finished the game, you will have all of the parts necessary to complete a friendly robot.

The graphics almost have a Steampunk nature to them, but it is more of a cartoon engineer story than anything else. The soundtrack reminds me of a lullaby that could put a baby to sleep.

To place the parts onto the machine and get it moving, players drag items from the inventory bar at the bottom of the screen. You start with two sizes of gears, but quickly move on to adding bearings, extension bars, bolts, and other parts. The further you progress, the more complex the puzzles get. 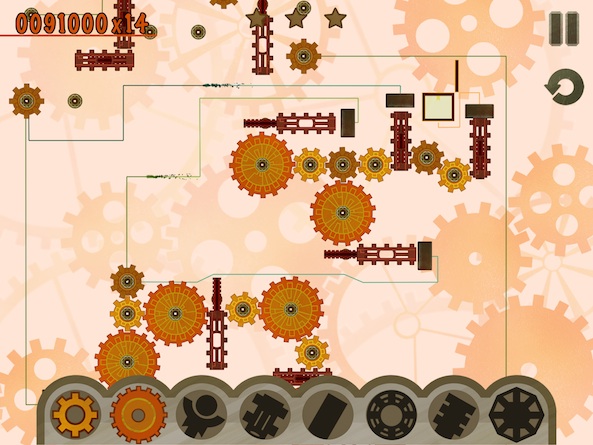 The goal is to unlock the gearbox by pushing a platform against a pink button that triggers a wire and opens the lid. There are three additional boxes somewhere on the screen, each housing a star. Try to open the star boxes before triggering the gearbox in order to earn three stars.

You’ll need to place gears on the available bearings. There are two sizes of gear. Most of the time, it is obvious which gear will trigger the action, so you won’t have to undo a placement. If you do have remove a gear you’ve placed, you can do so by double tapping it. This will also remove any multiplier you’ve built up after placing multiple gears in a row. So, don’t undo a placement unless you really have to.

If you feel like you are stuck, or know you could solve the puzzle better if you started over, tap the restart button in the upper right corner and it will clear the puzzle so you can have a clean slate.

Later, you will be introduced to reverse, start, and redirection buttons. When these buttons are triggered, they send a current to a specific bearing to either start turning, reverse rotation, or redirect extension bars. On later levels, you’ll have to take all of this into consideration when determining what goes where.

This game isn’t all about placing gears and bolts. The order matters. Sometimes, you’ll have to place a gear that will spin one direction in order to trigger a button that will rotate a different gear another direction, but if you place the wrong gear too soon, you will lock the whole thing up. You might also lose out on those coveted stars.

Speed is also important. The faster you solve a puzzle, the more points you earn. So, solve the puzzle as fast as possible without undoing any placements and unlock all four boxes to get the highest score. Then, you can check your score against your friends on Game Center to see how much more mechanical you are than them. 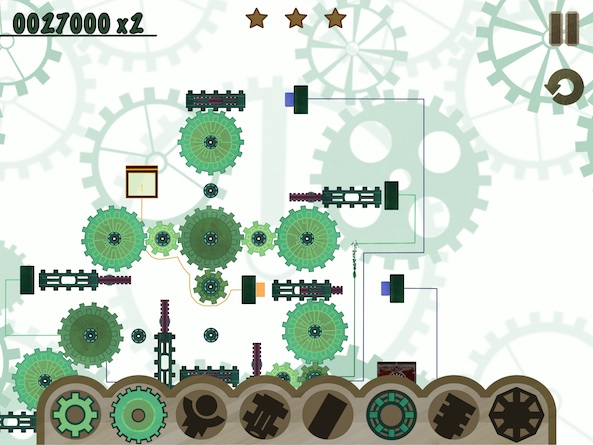 The learning curve in this game is fairly well balanced. The first few levels seem simple enough, but new elements are introduced that add to the complexity, increasing the challenge without becoming too hard too fast.

I really enjoyed the musical accompaniment. It is very relaxing and pleasant.

I would love to see a hint system implemented into this game. There were times when I just didn’t see how I could possibly figure out how to solve a puzzle and even when I finally did, it felt more like luck than skill.

A Mechanical Story is temporarily on sale for $0.99. For the level of complex puzzle gaming you get, I’d say the deal is a great one. There is no official information as to what the full price is going to be, but I can say that even at double that price it is still a good buy. The replay value is somewhat high since you can always earn more points for completing a level faster.

If you like puzzle games, this fits perfectly into that category. There are plenty of complex challenges, but it doesn’t get so hard that you give up. The restart button makes it possible for you to clear the board and try again as many times as you like. On sale, the game is well worth every penny, and even at double the price it is still a reasonable price. This game is available on the iPhone, iPad, and iPod touch. Download it in the App Store today.

Because A Mechanical Story fits so perfectly into the puzzle genre, it is broad enough to appeal to every puzzle fan. Some other new games in the genre include ORBB and Zero Age.

Does this game look like something you’d be interested in? Let us know in the comments below.