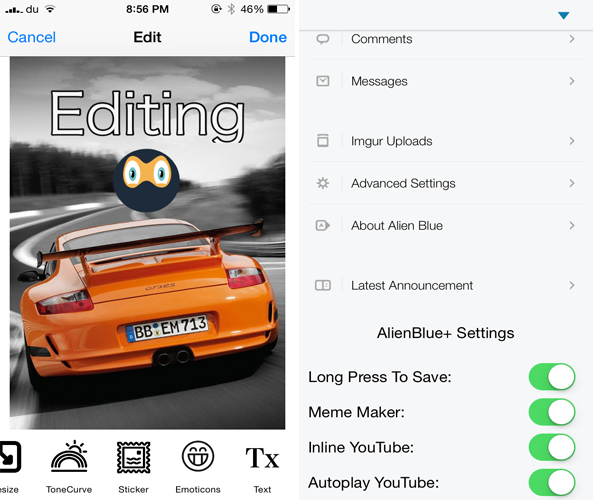 Alien Blue is one of the most popular Reddit client apps for iOS and was recently acquired by Reddit. Although the app has most of the features that a user needs, it’s still a long way from being a perfect app. This is why a new jailbreak tweak known as AlienBlue++ comes in to fill the gap.

Developed by UnlimApps, AlienBlue++ adds four new features to the popular Alien Blue app to improve  your experience browsing Reddit. The tweak comes with a built-in photo editing feature that allows you to edit photos and give them a new touch before posting them on Reddit. For instance, you’ll have the ability to add emoticons and texts, choose from a variety of effects and filters, crop the image, draw on it and much more.

Other than this, the tweak allows you to download any image and video from Alien Blue directly to your Camera Roll. This can be done by tapping and holding on a media to save it to your device. A little pop-up will also appear letting you know that the selected media has been downloaded. The tweak also plays YouTube videos inline and enables autoplay.

Upon installing the tweak, you’ll find a few new configurations in the settings pane of Alien Blue where you can enable or disable each of the features mentioned earlier. While the tweak doesn’t bring a bunch of new features, the developer has promised to add new functionality in future updates.

If you’re a frequent user of the Alien Blue app and would like to enjoy additional features, head to Cydia now and download the tweak from BigBoss repository for free.