Reddit is a virtual gold mine of information on countless topics, all organized into subreddits and multireddits, with options to get a customized feed of only what you want to see. /r/jailbreak is a great place to find tweak concepts and help with jailbreaking issues, and there is an infinite amount of other topics of interest on Reddit.

Of course, no social network is complete without an iPhone app, and there are quite a few third party iOS apps for Reddit – so many that it’s hard to find a clear winner in every category. Naturally, hardcore Reddit users each have their own favorite app like Alien Blue, but occasionally a newer app, such as Reddme, will come out and gain its own fan base. The hard part is deciding which one to use daily. Hence, an article on the best Reddit apps for iOS. 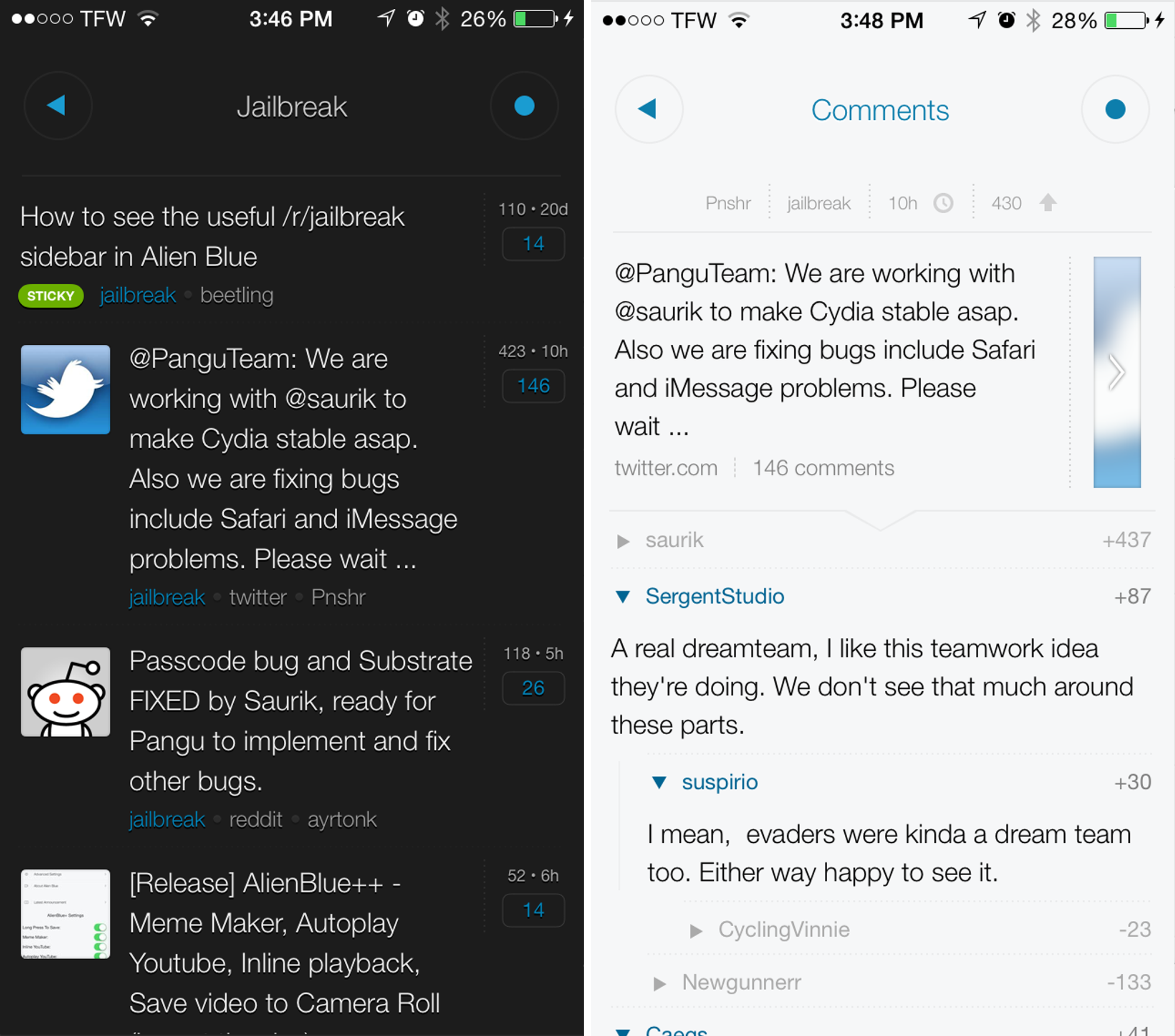 Anyone writing an article on the best Reddit clients without mentioning Alien Blue would get hounded in the comments by the many fans of the popular client. With a plethora of features and settings to customize your experience, Alien Blue certainly deserves the attention it has received.

Personally, however, the UI feels somewhat cluttered and cramped, causing the app to lack in the design department. Although it recently received a visual overhaul, its complexity still takes away from the experience. I’m a big night mode fan, but the one found in Alien Blue isn’t as aesthetically pleasing as it could be. In addition, this app doesn’t have a way to hide NSFW content, which can be a deal breaker for many users.

If you’re a serious Reddit user who is more interested in power features than a minimal UI, Alien Blue is definitely a good choice. While most features come with the app, there’s an in-app purchase that unlocks pro features, although that IAP is free at the moment, due to Reddit officially acquiring Alien Blue. You can download Alien Blue for free in the App Store. 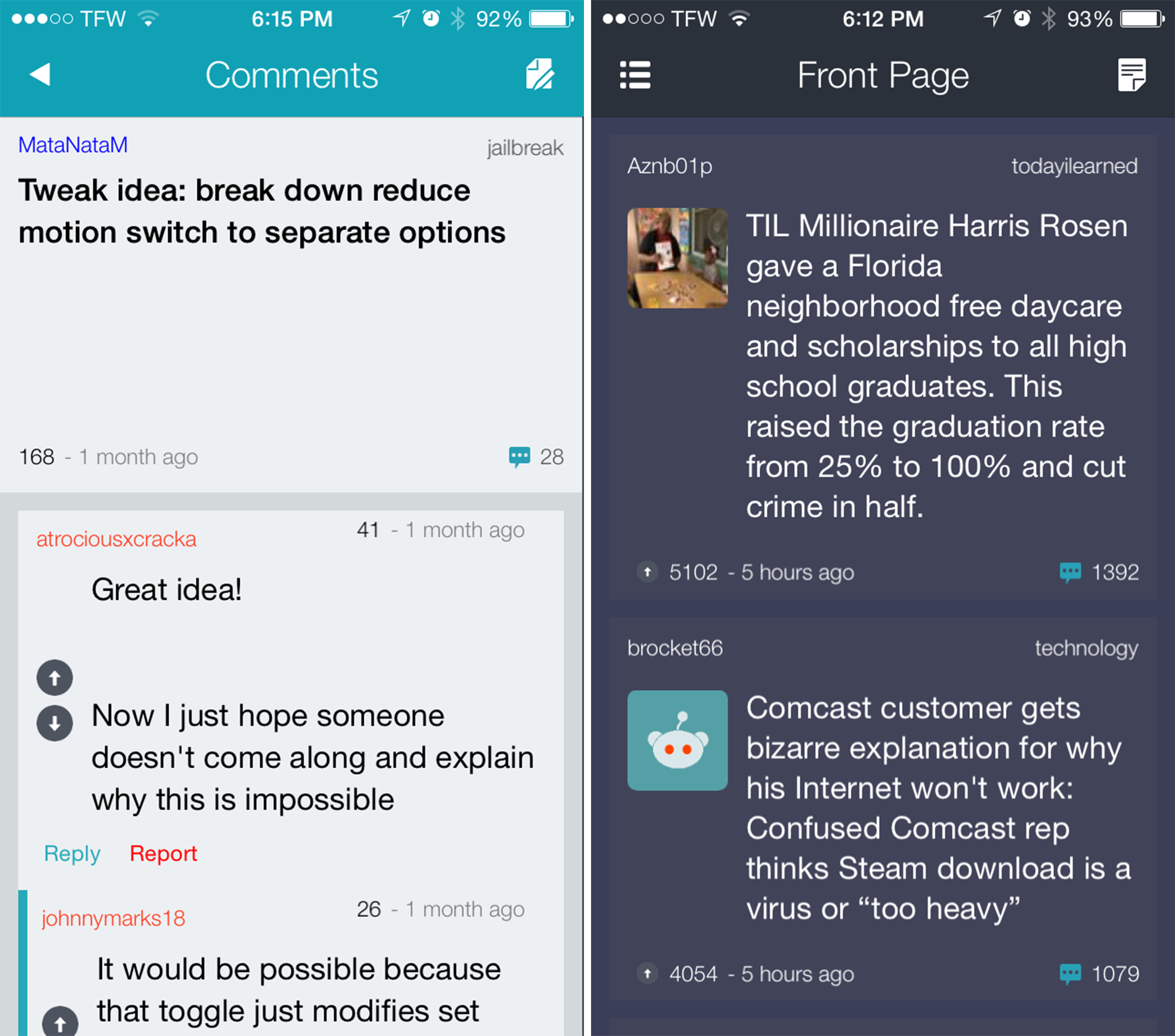 Although it’s the newest of the bunch, Reddme is a nicely designed Reddit client with a focus on comments – an integral part of Reddit. In testing, I’ve found that Reddme does a better job than most clients at making tracking comment threads and replies an easy task.

While it lacks many of the customizable options of Alien Blue, the developers of Reddme are planning continued support with frequent updates over the next several months, which should introduce more features and customizability. That said, Reddme is designed to be a simple-to-use client without the complicated clutter found in some apps.

If your current Reddit client has features you don’t use or an overly complex interface, or if you just want to try something new, then Reddme is an excellent option to consider. With a simple design and plenty of updates on the way, it’s well worth the $0.99 price tag in the App Store, and if you want to read more about it, we reviewed Reddme when it first came out. 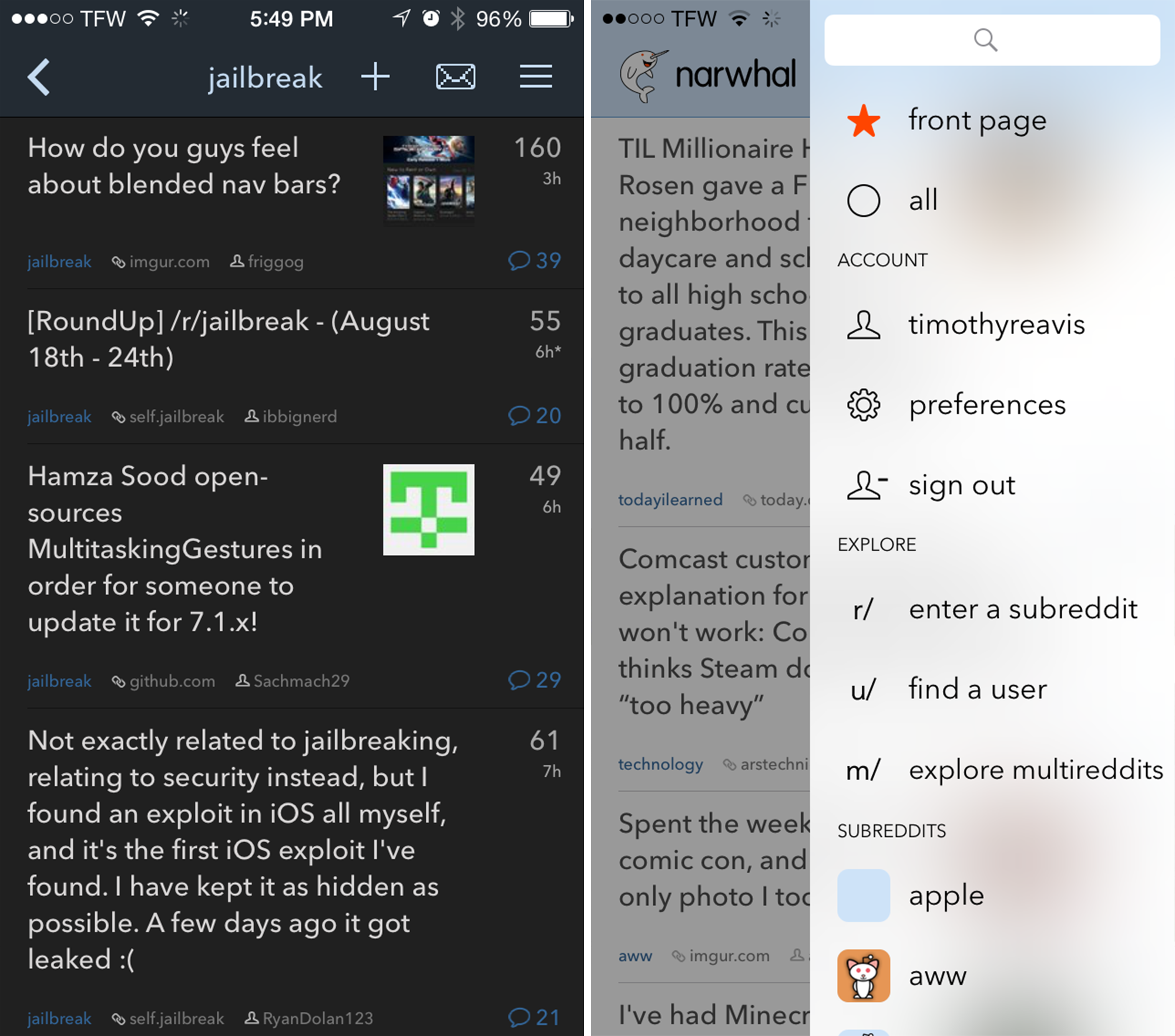 Out of all the Reddit apps I’ve tested, Narwhal feels the closest in design and gesture-based actions to Tweetbot 3, the popular, third-party Twitter client. With a pleasantly designed night mode and short/long left/right gestures for common actions, Narwhal not only looks great but is highly functional and easy to use. For reference, Narwhal, with a gesture invoked, is the app pictured in the banner image at the top of the article.

Perhaps the biggest downside to Narwhal is its restriction of sign in features, including posting and replying abilities, to a $1.99 paid upgrade. However, users can share a link to Narwhal on Twitter to unlock these premium features free for three months, which is a great deal considering the gesture-based app’s refined feel.

Although it doesn’t have a lot of settings and customization options, Narwhal is still an excellent option for Redditors of all dedication levels. If you like Tweetbot, you’ll get along well with Narwhal, which you can download for free in the App Store. 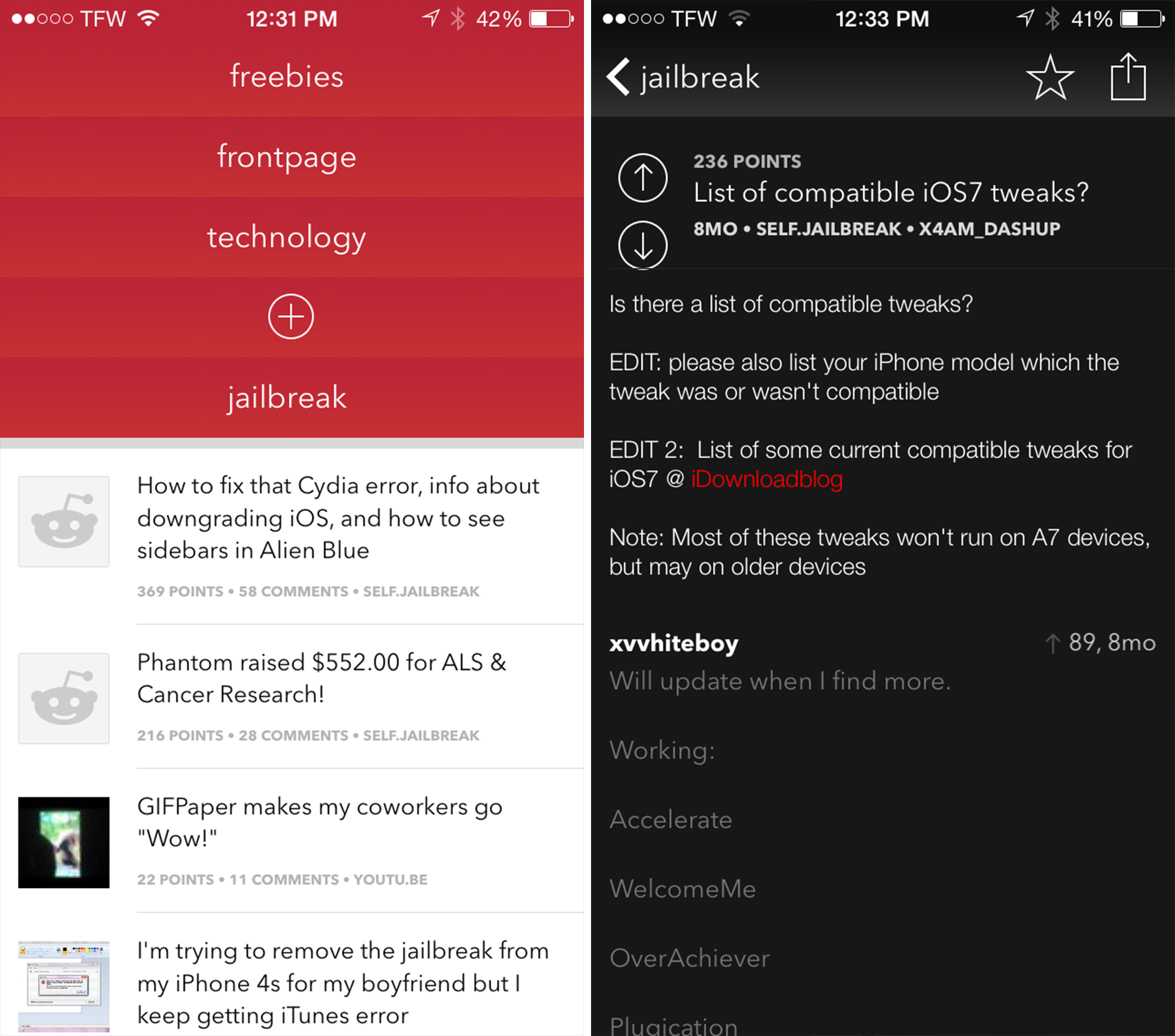 If we’re comparing Reddit apps to Twitter clients, Redd is closest to the official Twitter iOS app. With a simple but elegant default theme and a decent night mode, Redd is set apart by its method of sorting subreddits into a system of tabs, much like Safari or Chrome for iOS. Tapping the navigation bar while viewing a subreddit brings up all your active subreddits, which can be selected for viewing or swiped away.

Redd’s focus is decisively on subreddits, as is evident from its browse-like tabs and the use of the standard buttons near the bottom of the subreddit view as a means of sorting posts. Open tabs are preserved even after killing the app, so subreddits can be saved indefinitely, even without subscribing.

Perhaps Redd’s biggest downside is the way replies to comments are hidden until revealed with a tap. I find that it consumes too much effort to get to the deeper comments in a nested thread. However, if browsing subreddits is your thing, Redd is most certainly a valid option, as it’s available for free in the App Store with no in-app purchases. 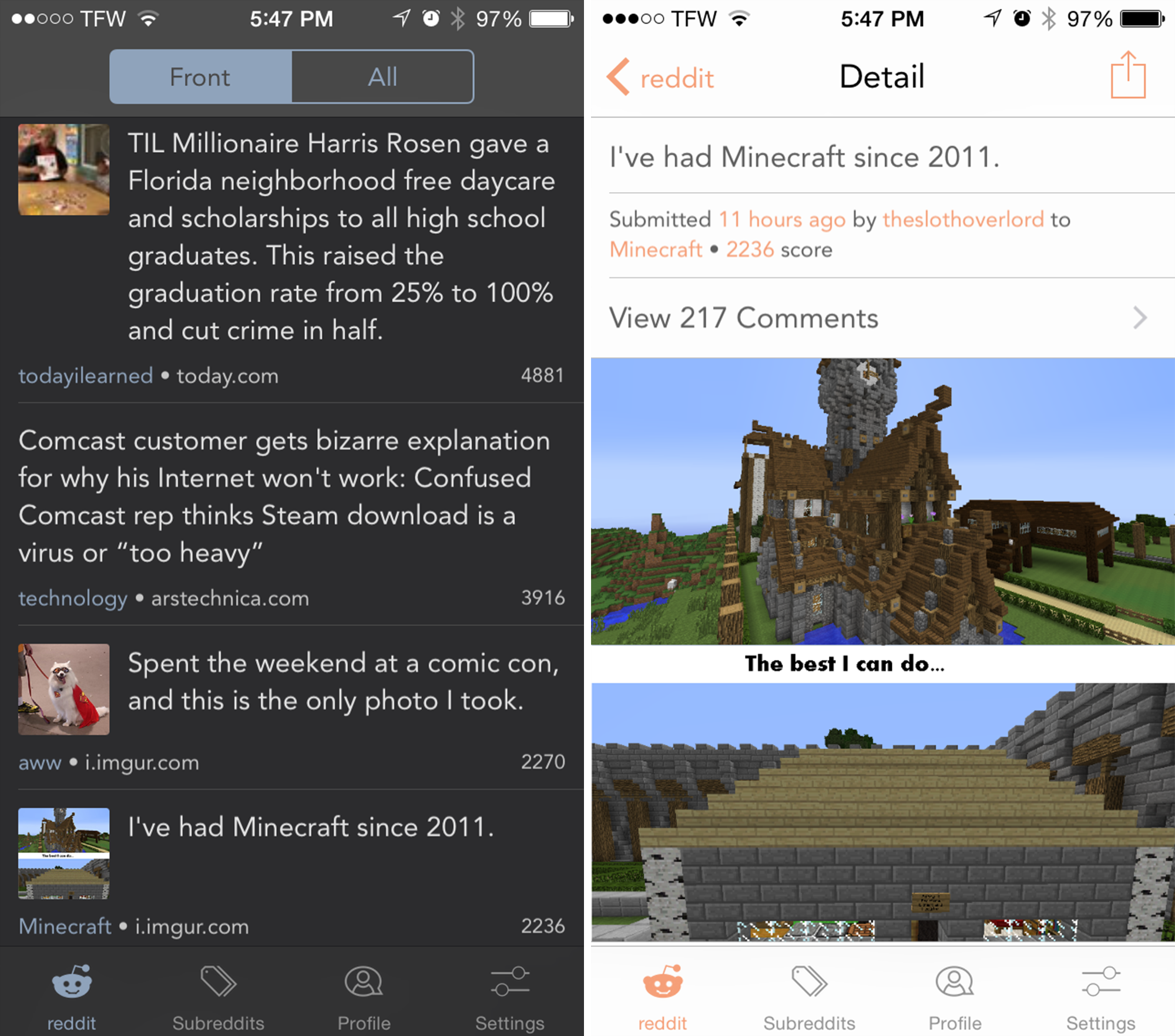 If a general-purpose Reddit client with an even focus on all areas of Reddit is what you want, Mars is an excellent choice. While many clients focus on things like comment threads or images, Mars does a nice job of handling each task evenly. The bottom row of four buttons lead to your front page, subreddits, profile, and settings, and each of these sections are neatly designed.

With a nice night theme, an option to hide vote counts, and password protection, Mars has a tidy feature set that serves the needs of casual and heavy Reddit users alike.

UI and features aside, Mars is completely free, which makes it worth a try regardless of feature preference. The exclusive password protection it has to offer may be the deciding factor for users valuing privacy, but whatever your reason for downloading Mars, you can do so for free in the App Store.

And the winner is…

From my period of testing, my personal favorite in this list of Reddit clients is Narwhal. I’m a gesture enthusiast, so the ability to short or long swipe left or right to vote, reply, etc., is a definite factor in my decision. The in-app purchase is vital for accessing basic functions of the app, but sharing a link in return for three months of free premium usage is a good bargain.

However, Narwhal may not suit the needs of everyone, as each user has his or her own preferences, so be sure to look into each of the apps featured here and decide for yourself. While Alien Blue is always going to be a favorite to many, keep an eye on the others, particularly Reddme, as its developers have informed me that continued support and additional features are scheduled for future updates.

If you have a favorite Reddit client on – or off – our list, let us know what it is and why you like it in the comments below!

Special thanks to iDownloadBlog reader Tashen for help with this article.