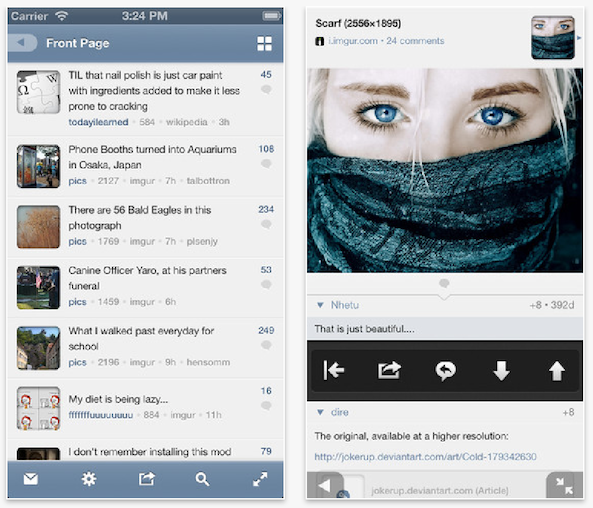 Reddit, as you know, is a social news and entertainment aggregation website that is ranked among some of the most popular in the world. Unfortunately, its official client for iOS leaves a lot to be desired, as it hasn’t been updated since 2011.

But luckily, the folks of Morrissey Exchange are committed to providing a proper mobile Reddit experience with Alien Blue. The app is considered by many to be the goto client for the popular website, and it just got a whole lot better…

This week’s update for Alien Blue — Reddit Client brings the app to version 2.7.0 and features a number of additions and improvements including new Moderator tools, touch gestures and tons of bug fixes. Here’s the massive change log:

While I like the UI enhancements, I think my favorite part about the update is the fixed GIF support. For some reason, GIFs used to take forever to load up in the app, if they did at all. But now they seem to appear instantly and run smoothly.

Another interesting thing I noticed with 2.7.0 is that you must now be signed in to Reddit to view anything marked ‘NSFW.’ I don’t have a Reddit account, as I just like skimming the Front Page from time to time, so this was kind of a bummer.

I’m thinking it must have something to do with Apple’s recent crackdown on apps that offer access to adult content. A few weeks ago 500px was pulled from the App Store over nude photos, and Vine was just forced to move up to a 17+ age rating.

At any rate, this Alien Blue update is a solid one, and I recommend grabbing it. If you don’t already have the app, you can find it in the App Store for free. Well, it’s free on the iPhone with a handful of limitations. The Pro version costs $1.99.