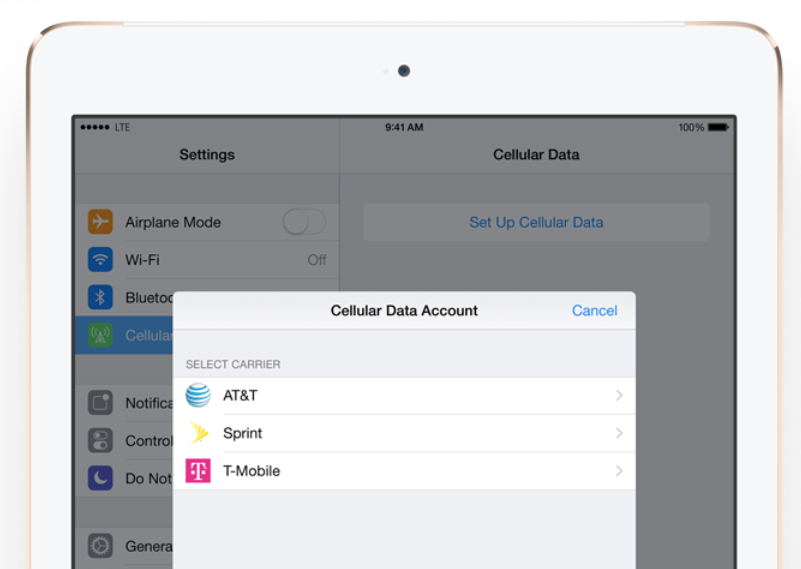 Just a heads up for folks looking to get a Wi-Fi + Cellular version of one of the new iPads. It was discovered on Friday that the awesome new Apple SIM feature, which is supposed to allow you to switch seamlessly between compatible carriers, doesn’t play well with all providers.

More specifically, MacRumors points to an Apple support page that says when you activate your new iPad with AT&T, the carrier dedicates its Apple SIM to their network only. So if you wanted to move the tablet to another provider, you’d have to purchase and install a new SIM.

It’s not a huge deal—AT&T says otherwise the tablet is unlocked, and I can’t imagine standalone SIMs are super expensive—but it kind of defeats the purpose. It would seem that the dream of changing data plans and carriers with a few taps in the Settings app isn’t quite a reality yet.

On Ipad with@apple sim here is what u see..no @Verizon ,@ATT trying to lock u, @sprint with error page! @TMobile wins pic.twitter.com/z0jDZ9sRt5

Out of the four major carriers in the United States, only 3 support Apple SIM (Verizon isn’t playing ball, yet). We now know AT&T will lock your SIM to its own network after activation, Sprint says it won’t be carrying iPads with Apple SIMs installed in-store, leaving just T-Mobile.

Introduced in the Cellular versions of the new iPad Air 2 and iPad mini 3, Apple says its Apple SIM “gives you the flexibility to choose from a variety of short term plans from the U.S. and UK right on your iPad. So whenever you need it, you can choose the plan that works best for you.”