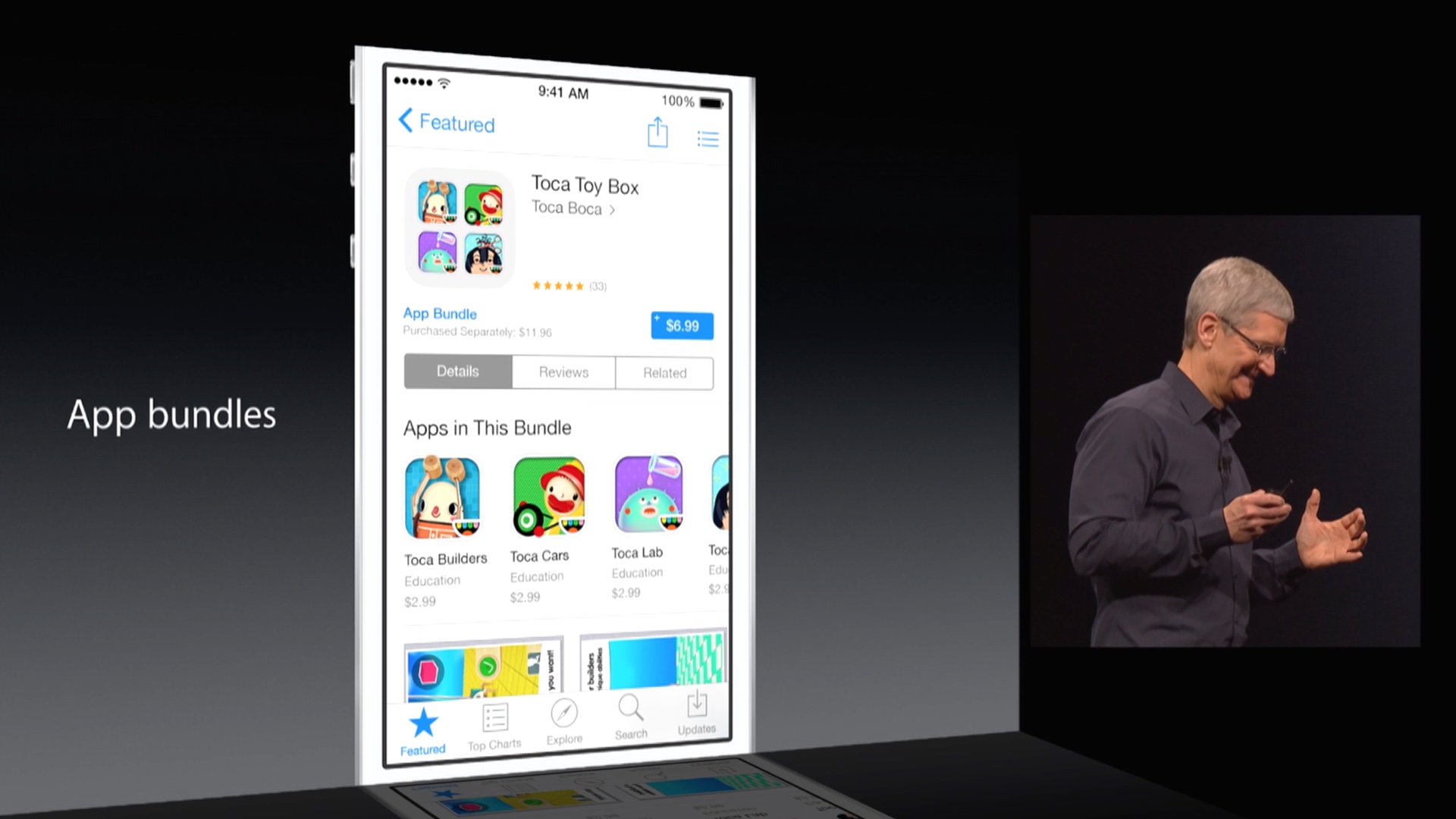 The much-improved App Store in iOS 8 features a number of enhancements. Case in point: app bundles. App bundles make it possible for developers to bundle up to ten of their existing iPhone and iPad applications in a single purchase at a reduced price.

Borrowing cues from the “Complete My Album” feature for music that debuted on iTunes in March 2007, app bundles are great promotional vehicles to drive sales and can serve as a nice reward for loyal customers.

But for the vast majority of ordinary users, app bundles are one of the least understood new features of the App Store in iOS 8. That it’s still very unclear how the App Store’s Complete My Bundle works is Apple’s fault.

And it certainly doesn’t make its users’ lives any easier with cryptic feature descriptions and the App Store’s non-intuitive bundle pricing mechanism. But don’t sweat, here’s everything you need to know in order to understand how Complete My Bundle works.

“If you purchased one or more apps from an eligible bundle, you can now use Complete My Bundle to receive the apps you don’t already have,” explains Apple’s support document dedicated to app bundles. “When you complete the bundle, you won’t have to pay the full bundled price”.

So, if you go to the App Store’s App Bundles section dedicated to Apps, Games or Kids (bonus: a few bundles worth checking out), you’ll notice that bundle prices vary depending on apps you already own. What this means is that in most instances, any particular bundle price I’m seeing probably won’t be the same on your end. 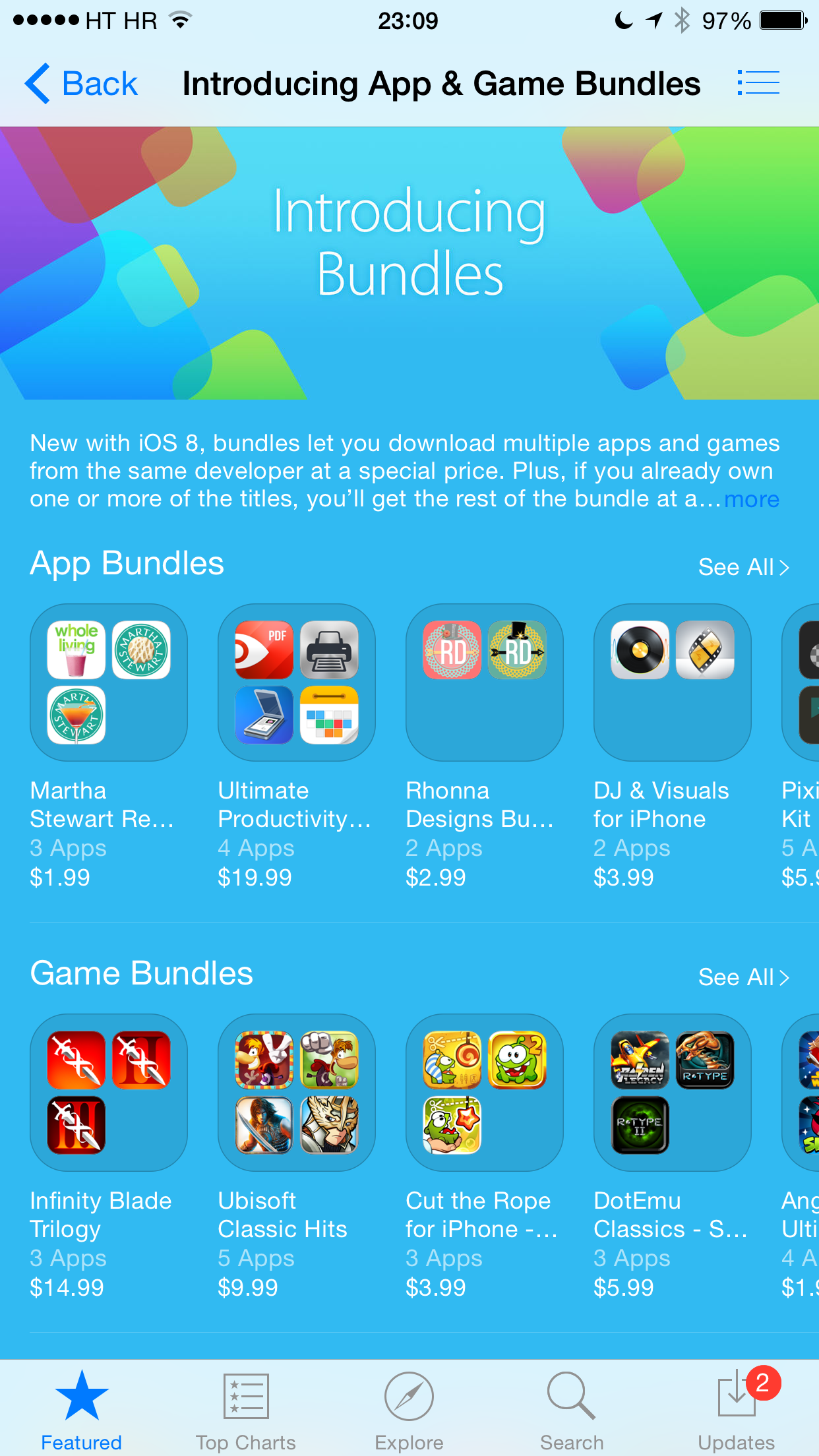 Folks who own all of the bundled apps will see the bundle listed as “Purchased”.

Again, based on the fact that I already own the individual items included in these particular bundles. By the way, notice how the App Store smartly removes the Buy button on such bundles in order to avoid any possibility of user confusion. 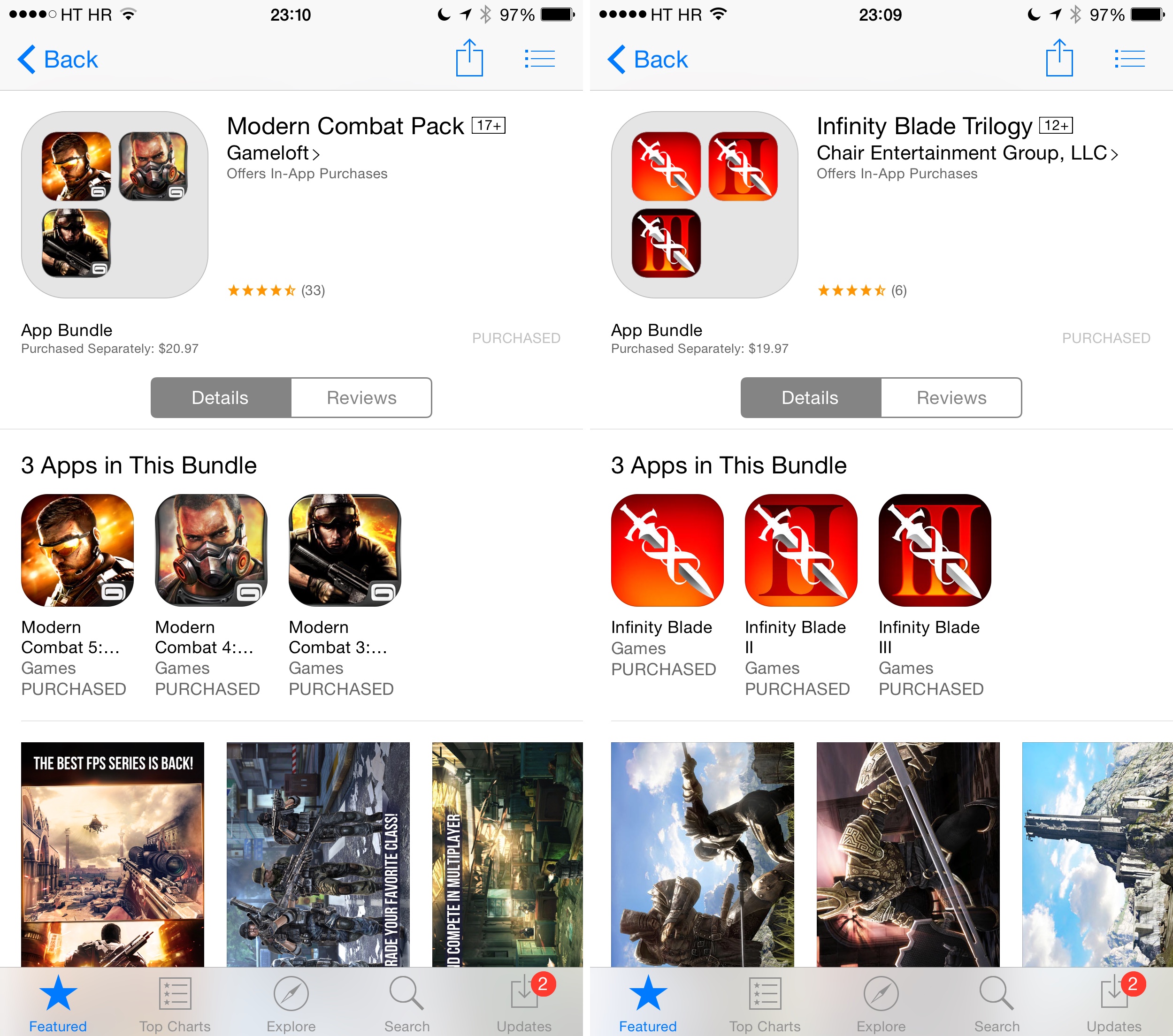 As the screenshots attest, the Infinity Blade games would run me $19.97 if purchased separately, or $20.97 in the case of the three titles included in the Modern Combat bundle.

But sometimes, apps you don’t own may cost you more in the bundle, or less, than their actual prices and it’s confusing as hell. A good example — and again, it applies only to my specific case — is Atypical Games’s Sky Gamblers bundle, comprised of Sky Gamblers: Cold War and Sky Gamblers: Storm Raiders.

Having previously purchased Storm Raiders but not Cold War, you can see that the App Store is offering to complete the whole bundle for $5.99? But wait a minute, something doesn’t compute here: isn’t Cold War listed as costing $4.99 just further below?

Clearly I won’t be completing this bundle. 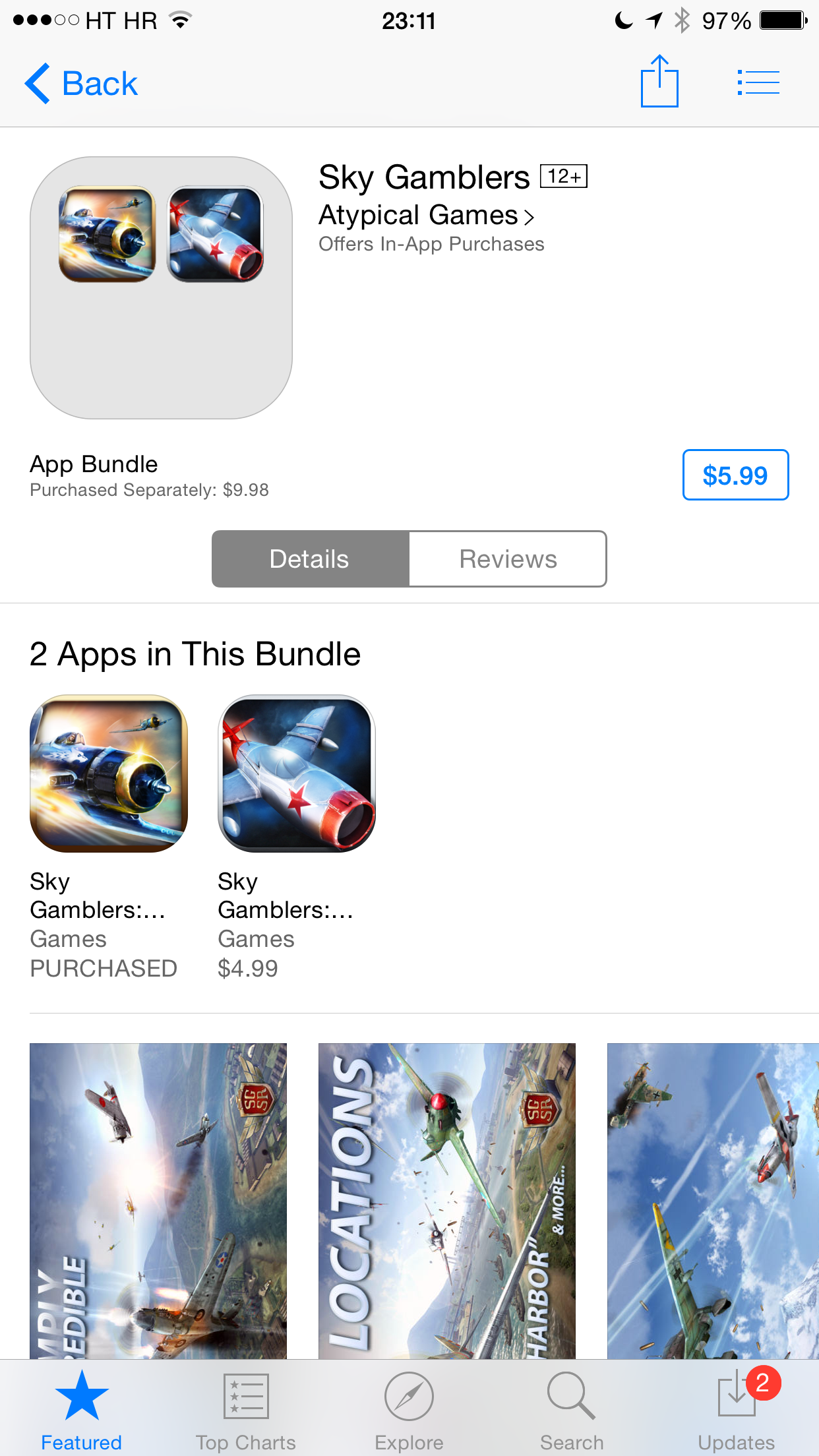 And while we’re at it, what’s the deal with the App Store offering to complete the Worms Trilogy bundle for free? I mean, I’m not complaining but the original Worms game (which I don’t own) is unambiguously listed as a $4.99 value — so what’s up with that? 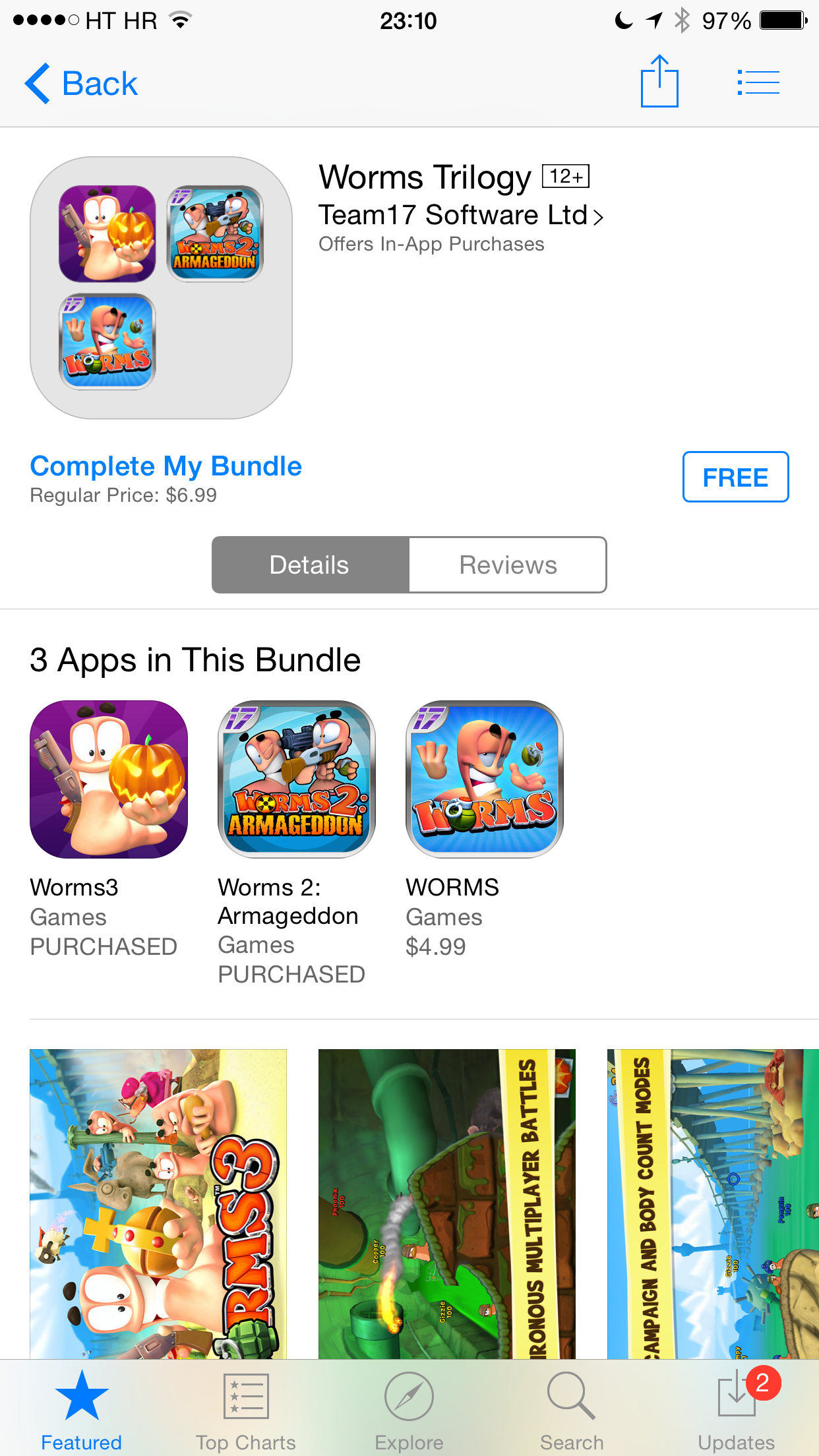 As it turns out, developers over at Panic did their homework and were able to figure out precisely how Complete My Bundle works, even before Apple published its support document.

“Complete My Bundle takes whatever money you’ve paid for the individual apps and applies that towards the bundle’s fixed price,” the post reads.

“So, if you buy an app on sale, or use a promo code, your Complete My Bundle price can be different than someone else’s, and in some situations it might be cheaper to buy the remaining app(s) individually,” Panic explains.

So in the case of the Sky Gamblers bundle, I bought Storm Raiders on sale. But because the bundle’s fixed price of $9.98 is based off current app prices, completing the bundle would cost me a dollar more compared to simply buying Cold War outside the bundle for $4.99. 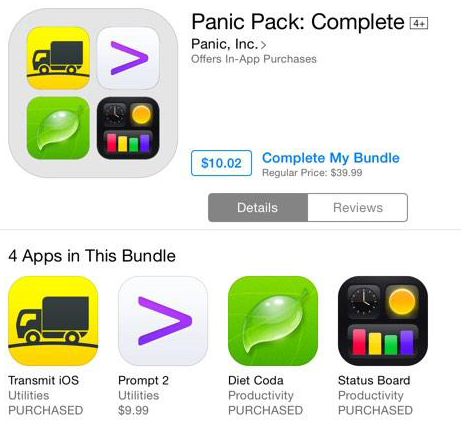 Panic offers an example of their own.

Apple’s support document specifies that a user’s Complete My Bundle price will vary depending on what they already bought from the bundle, “but it won’t be more than the price they’d pay to buy each app individually”.

The single most important thing you need to remember concerning app bundles: when buying apps from a bundle, the amount you pay for each individual app will be deducted from the total bundle price. And in case you downloaded an app from a bundle for free that now costs money, you won’t get any credit to put towards completing the bundle.

Wrapping up, I really, really wish Apple put more thought into app bundles and made the pricing schemes and rules a lot easier to understand.

Interestingly enough, sometimes the App Store won’t permit you to complete a bundle, mostly if an app becomes free or has been removed from the store. And yes, you can purchase a bundle as a gift for someone.

It’s my hope that this write-up will help clear up the confusion surrounding this much appreciated new App Store feature in iOS 8.