We’ve seen quite a number of tweaks on Cydia that provide system-wide access to music controls including Musiex and the popular MiniPlayer tweak. QuickMusic is yet another similar tweak by developer Gabriele Filipponi, but this one features a unique functionality and stylish interface that I’m quite fond of.

With QuickMusic, you can swipe up the Music icon to bring up an awesome looking interface containing the album artwork as well as the music controls including the play/pause button enclosed by a circular progress bar, skip and previous buttons.

But that’s not all. The tweak also displays all the musics composed by the same artist which can be viewed by double tapping the Album artwork. On the other hand, swiping the interface from the right to left displays a list of all the songs on your device which you can play right away. 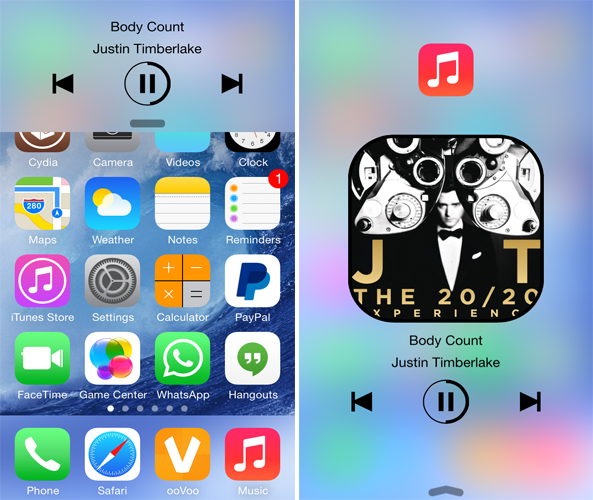 The tweak’s interface can be closed by pressing the Home button or swiping down the Music icon. You can also access the music controls from anywhere within iOS by using an Activator gesture. Doing so displays a banner at the top of your screen allowing you to control a currently playing music from anywhere. You can also swipe down the banner to view QuickMusic’s interface in full screen.

The first time you open the tweak’s configuration pane from the Settings app, you’ll be taken through a short walk-through of all the settings provided by QuickMusic and a brief description of what each does. From there, you can enable or disable it on demand, enable or disable playing music stored in the cloud, customize the Album artwork, blur style, tint color and font color. You’ll also be taken through a short tutorial of how to use the tweak.

Personally, QuickMusic is now one of my favorite jailbreak tweaks and offers a unique functionality that will make you fall in love the moment you start using the tweak. If you can’t wait to get your hands on the tweak, head to Cydia now and purchase QuickMusic for $1.99 from BigBoss repository. Currently, the tweak supports iPhone devices only running iOS 7.0.x and 7.1.x, which means that iPad isn’t support yet.