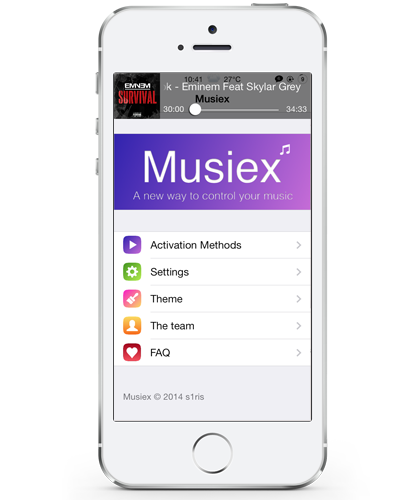 Recently, we compiled a list of best jailbreak tweaks for the Music app on iOS 7 and you might want to check it out to discover new tweaks that you may find useful. This said, Musiex was among the list and we decided to take it for a spin. Read on to find out more about it.

Musiex allows users to access the media controls from anywhere within iOS and control the currently playing song without having to open the Music app. It can be launched by making use of an Activator gesture and swiping up the interface or pressing the Home button will close it. Once Musiex is activated, a neat interface appears at the top of the device’s screen, just like the notification banner, and displays information about the currently playing song such as the track name, artist and more. Additionally, the song’s artwork appears to the left of the interface and a progress bar is also available enabling users to scrub through songs and move to any specific point of a track…

Swiping the interface from right to left will reveal additional buttons including music control buttons such as play/pause, forward, and backward. Musiex is quite similar to MiniPlayer but lacks the ability to queue songs. However, it provides shuffle and repeat options as well. 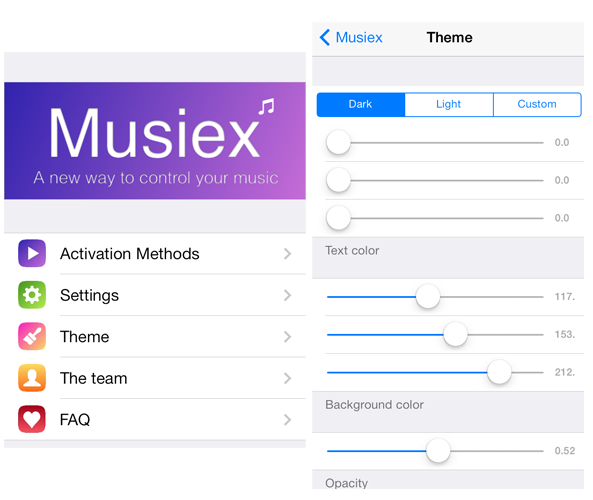 Once Musiex is installed, a new preferences pane will be added to the Settings app where you can set an Activator gesture, configure and customize it. To set an Activator gesture, tap on “Activation Methods” and select from a list of available gestures. Interestingly, the tweak comes in dark and light theme and allows you to create your own custom theme by configuring the background color and opacity as well as the text color.

The only issue that I had with the tweak was that instead of showing “00:00” as the start time, it sometimes displayed “30:00.” But other than this, it works flawlessly without any problem.

Musiex not only works with the Music app but with other third-party media apps from the App Store as well. If you’re interested in giving it a shot, you can purchase Musiex for $0.99 from Cydia’s BigBoss repository. It’s compatible with all iOS 7 devices except iPad.

What do you think of Musiex? Do you prefer Musiex over MiniPlayer? Share your opinion in the comments section below.