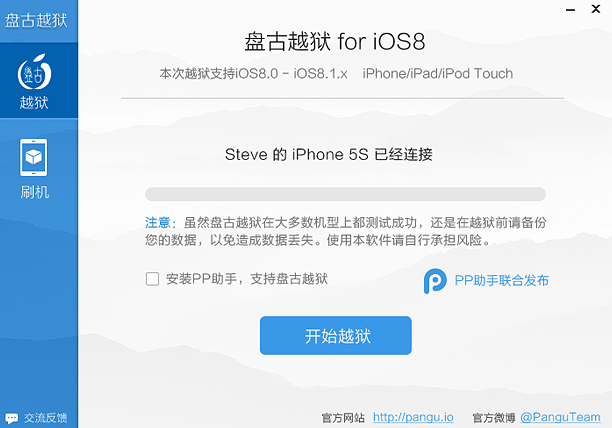 The Pangu team has released a jailbreak for iOS 8 – iOS 8.1 devices today, just about 35 days after the launch of Apple’s latest mobile operating system. The download link for Pangu for iOS 8 was briefly available on the official Pangu website before being pulled a few minutes later.

Although this is great news for jailbreakers, it does come with a few strings attached that make this initial iOS 8 jailbreak release somewhat useless for the time being.

The first thing to note is that this jailbreak will not install Cydia at this time. Only providing basic SSH access, it appears that this initial release of Pangu is mostly geared towards developers so they can update their tweak for iOS 8. Of course, it is also necessary that Saurik updates Cydia for iOS 8 in order to make it compatible with the newly updated operating system, which explains why Cydia is not bundled into Pangu for iOS 8 right off the bat.

In short, although you could technically jailbreak your device, it wouldn’t do any good to the majority of users as Cydia wouldn’t be packaged with the jailbreak.

The good news is that Saurik is currently working on updating Cydia for the iOS 8 – 8.1 Pangu jailbreak, as announced on reddit recently, although he didn’t provide any ETA. Saurik explains:

So, windknown has contacted me, about a half hour ago, via e-mail. He has told me one of the issues that is keeping Substrate from working on the device, which will probably require me to build a little binary patch for dyld as part of the Substrate installation sequence. This was the worst possible day for me, as I’m traveling back to Santa Barbara today (I’m currently in Texas, having come here to give a talk at The Big Android BBQ), which means this will take me a little longer than I’d like, but clearly getting Cydia and Substrate working on iOS 8 is my highest priority. I thankfully think that I actually can start working a little on one of the Substrate issues using an iOS 7 “model” based on the information provided by windknown, which means I’ll lose less time to not having all of my devices with me. (I currently have no clue why Cydia itself is not functioning, but will find out later today when I can see it myself.)

A broken Windows only version (so far)

This release of Pangu iOS 8 – iOS 8.1 is for Windows only, but it appears that the Pangu team removed the download link, likely to fix issues linked to this initial release. The website still provides information about the jailbreak process, which might be useful to anyone looking to jailbreak their device once a stable version is available.

At this time, we were not able to successfully jailbreak any iOS device with this first release of Pangu. We actually have yet to see reports of a successful jailbreak instal. We will of course provide updates as a new version is released.

It is fair to assume that a Mac version will also be available at a later time.

According to Pangu’s website, Pangu for iOS 8 – iOS 8.1 is compatible with the following devices:

Maybe the first thing anyone should do before playing around with this version of Pangu is to backup their device.

The Pangu Team also suggests turning off Lock screen passcode and Find My iPhone via Settings > iCloud before proceeding. Finally, the team notes that similarly to the official iOS 8 update, users are required to have some storage space left on their device in order for Pangu to run.

These are basic rules shared by the Pangu Team that are unlikely to change, even when a more stable version packaged with Cydia is available a little later.

We are currently looking at Pangu for iOS 8 – iOS 8.1 and will provide a set of instructions in a separate post when done. But again, note that these instructions will be limited by the current nature of this jailbreak. As we always do, we’ll provide updated instructions as Pangu is updated.

As we noted above, we’re currently unable to get Pangu to work with any iOS 8 device we tested. Like most people, we’re getting a Touch ID error.

Update: See how to jailbreak iOS 8.1 with Pangu

At this time, we highly suggest you stay away from this jailbreak until further notice. As noted above, this release is mostly for developers and for Saurik himself to update Cydia for iOS 8. Even if you were able to jailbreak now, you wouldn’t be able to do much with your device at this time, unless you’re a developer.

Although the only download link for Pangu that was available has been pulled, there are still a few mirrors floating around the web. We don’t believe it’s a good idea for most users to use one of these links at the time, for all the reasons mentioned above. If you do, please proceed at your own risks.

What you can do now is get ready for an upcoming version of Pangu by updating or restoring to iOS 8.1 using iTunes (not OTA). This will ensure that you’re fully ready when a stable version of Pangu is released.

Update 2: Saurik has now released a new version of Cydia that can be installed manually.