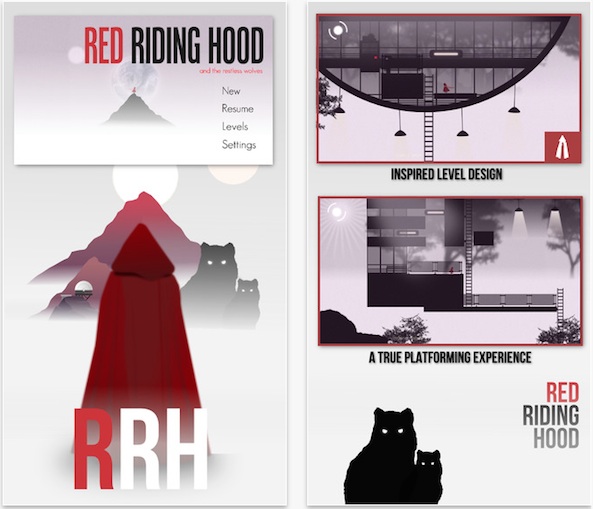 Even though my favorite platform game of all time is Super Mario Bros., I love it when developers shake things up a little and twist a traditional genre into something familiar, but different. Atmospheric platform games are incredibly fun, offer great challenges, and look beautiful.

Red Riding Hood and the Restless Wolves is one such atmospheric platform game that is slow paced, easy on the eyes, and full of great puzzle challenges. Take a walk with Dr. RRH as she tries to get back to her current place and time.

The story is that Dr. Hood, a noted physicist, was working on an antimatter reactor when an accident caused a particle blast that sent the good doctor spinning through space and time. You must help her find her way back by exploring every nook and cranny of the world around you to open doors, find hidden passageways, and activate moving platforms, all in an effort to get to the other side. 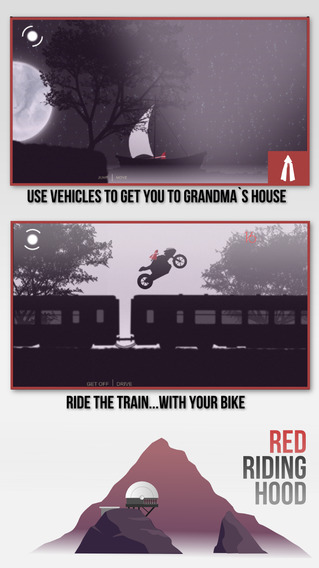 The screen is painted in a misty black and gray theme with Dr. Hood cloaked in bright red. Her tiny stature makes it impossible to cross the path of a bench without having to jump up to reach it. Luckily, she can jump really high. Hood has the ability to nearly float through the air on triple jumps. This ability is very useful when trying to reach across wide chasms.

The game’s controls are based on what the developer calls a 60/40 screen split. It means that the right half of the screen is used for movement and the left is used for jumping. You can touch anywhere on either side of the screen to perform the given action. The action button is housed in the upper right corner of the screen, which allow players to do such things as get into a car. 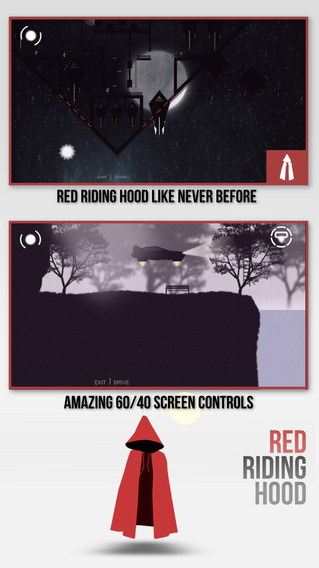 The game’s distributor, Whaleo, also has its own version of Apple’s upcoming Handoff feature. Anyscreen, which requires Internet connection and geolocation, allows players to start the game on their iPhone or iPad and finish it on their desktop with only a few taps.

Incidentally, you can play the first level for free by visiting the gamemaker’s website. The controls can even be adjusted for touch screens so you can get a feel for what it is like.

Red Riding Hood and the Restless Wolves is available on the iPad, iPhone, and iPod touch for $0.99. Download it in the App Store today.

What do you think of this atmospheric game? Let us know in the comments.