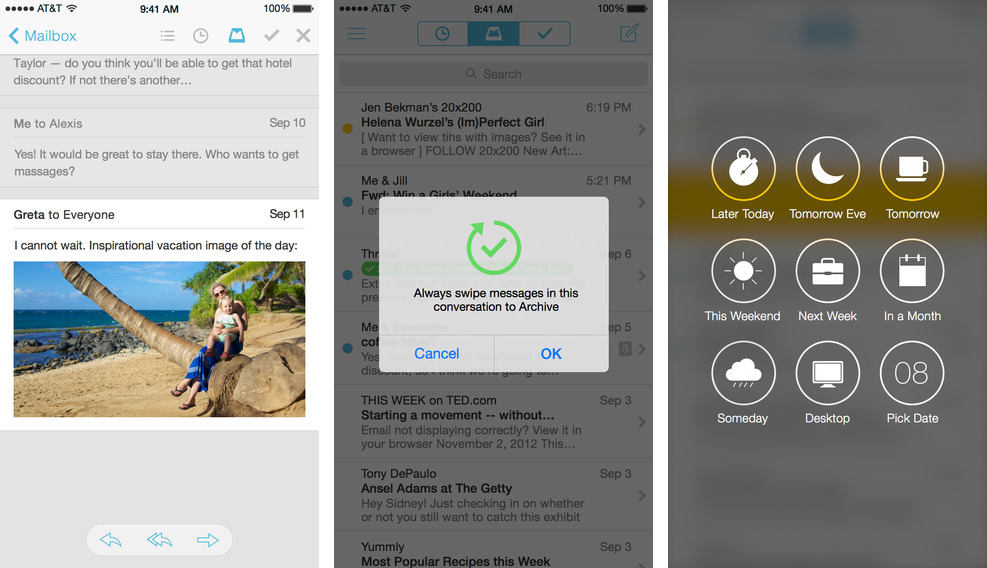 Fans of the popular Mailbox email client, rejoice! A compatibility update became available Monday, bringing native display support for the iPhone 6 and iPhone 6 Plus that lets you see more of your emails rather than be limited by a blown-up interface.

Mailbox 2.3.1, a free download, also brings the ability to customize your swipes further and includes a pair of fixes, one resolving issues with rendering of some emails and the other squashing a bug affecting delivery of Push Notification for new messages in iOS 8.

In addition, as per the official Twitter account, Mailbox’s public beta client is now available to everyone wishing to test-drive the app.

Like the refreshed iOS client, the Mac beta brings support for a new gesture to purge email from Trash and Spam by swiping a message to the right while fixing an issue preventing attachments to be sent via aliases and another one that used incorrect “From” addresses when replying to a message sent to another alias.

Apple kept true to its promise and is now requiring everyone to create app-specific passwords for third-party applications that want to connect to their iCloud Mail rather than authenticate apps like Dropbox with your Apple ID.

Jeff has put together a quick tutorial on that and Dropbox provides instructions of its own as well. Another good starting point is Apple’s support document detailing the creation of app-specific iCloud passwords.

You only need to create an app-specific password for Mailbox if your Apple ID is protected with two-factor authentication.

“If this is you, Mailbox will ask to re-authorize your iCloud account,” developer note, adding that “until you do, Mailbox cannot sync or send messages”.

To enable two-factor authentication for your Apple ID, consult our easy to follow guide.

Once you’ve created an app-specific password for iCloud, you must update your iCloud account on Mailbox by doing the following:

That’s all there’s to it.

Mailbox, a 24.7-megabyte universal download, is available for an iPhone, iPod touch or iPad running iOS 7.0 or later. The previous update brought support for your Drafts across mobile and desktop edition of Mailbox.

Speaking of desktop, Dropbox has been beta-testing Mailbox for Mac with the wider public for some time now, with the goal of releasing a stable build later this year.