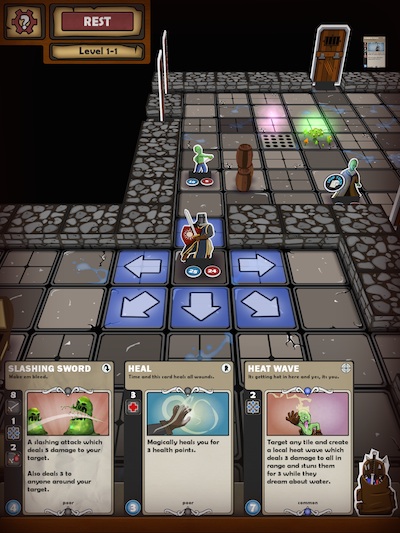 I am a card-carrying (pun intended) member of the board gaming community. I love a good, old-fashioned hours-long tabletop adventure with three to five of my closest friends. That’s why, any time I see a board game app, I jump at the chance to check it out and pass my experience onto you.

Card Dungeon is a basic dungeon crawl tabletop style board game that reverts back to the two-dimensional token look while still making a roguelike adventure that is fun for fans of the genre. We’ve got a full game review of Card Dungeon for you today.

The first thing that drew me to this game was the graphics. Instead of a complex animation game board with stylized creatures roaming around, the game features cardboard cutout token style game pieces. Believe me, I love seeing my favorite board games turned into digital animation, but this is a clever design for an iOS game.

Players’ characters are outfitted with two traits, one good and one bad. At first, you only have one choice of each trait, but as you discover knowledge gems, you’ll be able to use them to unlock new ones.

Players also start with three cards. One for melee combat, one for ranged attack and one for healing. Ideally, you will always have such a well-rounded hand, but the cards drop randomly. So, you are not likely to get all three types in the future.

The game board is made up of a series of spaces. When it is your turn, you can move one space in any direction that is not filled with an obstacle. The board will display your options. If there is something in your path, you may be able to check it for possible loot. Searchable items will be highlighted in yellow when they are within reach.

In different rooms, enemies appear. The game is turn based. So, you and each enemy will get a turn moving, attacking, or healing. Just like in a real board game, you must wait your turn, even to move. 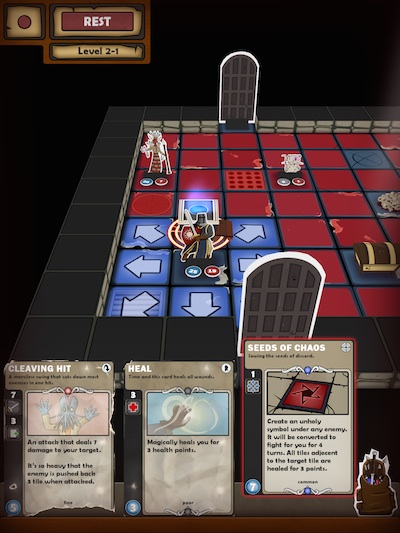 After you’ve chosen your positive and negative traits, you will head to the first dungeon, which has three chapters. Basically, that means you must search around in the dungeon until you meet a mini boss. Once you’ve beaten one mini boss, you move onto the next chapter. The final chapter features a main boss, which is significantly harder to beat, but still not impossible to overpower.

Once you’ve completed every chapter in a dungeon, you can move onto the next. The game is a roguelike, meaning once you die, you lose everything you’ve looted and must start over from the beginning.

To attack an enemy, tap the card you wish to use and then tap the target. Ranged attacks allow you to hit an enemy from far away. Melee attacks happen in adjacent spaces. You and your enemy’s tokens include current hit points and mana. Plus, if you or your enemies are affected by a spell or poison, a tab appears denoting the condition. For example, if you throw a fireball at your enemy, he will gain a tab that reads “on fire.”

After you kill an enemy, a loot bag will appear. Tap it to see what you get. Sometimes, you’ll open a bag of sand. Other times, you’ll find armor that you can equip on your adventurer. Hopefully, you will find a new card.

Players can only carry three cards. Cards wear out with use and will eventually stop working. You can tell when a card is wearing out because the image will begin to fade. If it wears out completely, a big red “X” will appear and you will no longer be able to use the card.

It is important to know when to keep a card and when to switch to a new one. Some cards offer great attacks and can work in a variety of situations. Others are less helpful and might get you stuck in a corner. Even if you find a card you love the most, you have to be prepared to give it up because it won’t last forever.

Dungeons are randomly generated, so you will never play the same game twice. Plus, when you find knowledge gems and unlock new traits, it will make a difference in the outcome of your game. 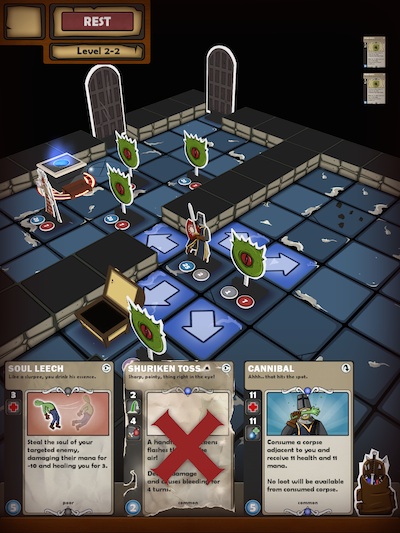 Not only do I appreciate the 2-D graphics, but this is a downright good roguelike game. Each room has an enemy or two with varying degrees of attack abilities and weaknesses. Looting offers gold, armor, and a quandary as to whether you should switch cards.

Since this is a turn-based game, you can’t move more than one square at a time, which makes getting through long hallways and empty rooms time consuming. I’d like to be able to move freely whenever there is no enemy in sight.

The game loads a bit slowly, especially between chapters.

It also desperately needs multiplayer capability. It would be so fun.

Card Dungeon is currently on sale for half off at $1.99. It is definitely worth the two-dollar price tag for fans of the roguelike dungeon crawl genre. The game’s basic mechanics are well made and offer hours of entertainment. At $3.99, it is a bit pricey, but still a good buy since the replay value is so high.

Fans of roguelike games should definitely check this one out. It has all of your favorite perma-death features and gives you a good, solid dungeon adventure. The price is great while it is on sale, but still a decent value at full price. This game is available on the iPhone, iPad, and iPod touch. Download it in the App Store today.

I recently reviewed another roguelike game, The Nightmare Cooperative. Warhammer Quest is a great dungeon crawl board game.

What do you think of Card Dungeon? Let us know in the comments below.