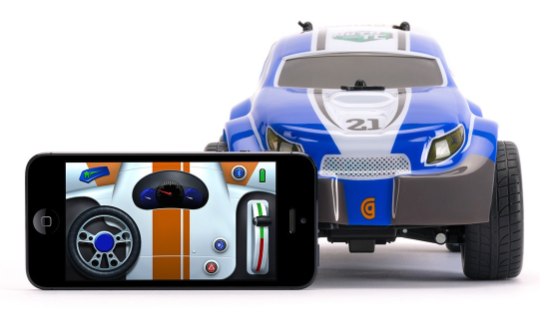 If you are ready to hit the pavement, I suggest grabbing the Griffin MOTO TC Rally iPhone controlled toy car. That’s right, no additional hardware is required, just your iPhone and the Bluetooth 4.0 controlled race car. As a child, teenager, and even as an adult, one of the biggest rushes in the toy world is remote controlling a toy car. Growing up, I used to make race tracks in the pine needles behind my parent’s house. Not much has changed.

Bringing my childhood excitement in line with the 21st century, the MOTO TC is not only iPhone controlled, but also utilizes virtual damage control, weapon systems, and can monitor lap times. It is essentially like playing a console racing game, but with actual hardware.

Racing alone or with friends is made simple with the MOTO TC Rally App. The app easily connects with the vehicle, once the phone and car are linked through BLE (Bluetooth Low Energy, 4.0). Through the mobile app, everything is controlled from the lightning LEDs to motion controlled throttle.

I did enjoy the ability to control the car with iPhone’s accelerometer. Simply tilting the iPhone will manage the car’s momentum and turning radius. A nice surprise, the turning radius is actually proportional to the user’s controls. This means, the car can tell how hard you are turning and respond correctly. The throttle is the same way, but that is less of a surprise. I also did not notice any lag between the car and my driving controls. For a full explanation, watch the video below. Although the video is almost an unintentionally humorous satire of holiday-season commercials, it does a good job of explaining the possibilities.

With about 20-35 minutes on a 2 hour charge, you will enjoy a solid race session before needing to recharge. The rubber wheels are great for indoor or paved outdoor activity, but you won’t want the MOTO TC Monster truck for any serious off road action. The TC Rally is just built for racing. In fact, it comes with a magnetic lap counter, should you want to keep race times or fight against another car.

Unfortunately, I could not test the multiplayer with only one vehicle, but the video shows a compelling battle between two cars. Using virtual weapons and damage, the Rally becomes a real-world video game. Although the damage is detected through on-board software, I can say I gave this guy quite a beating while getting used to the controls. The bendable exo-shell held up to my damage really well and after a few nasty smashes, showed no outward signs of wear.

Top speed was a little tricky. I spent most of my time running this around a 1,200sq foot open office floor plan and only seemed to get it to top speed when running the full length of the office. This thing can certainly raise some eyebrows. Of course, a dedicated RC car you would find at a local hobby shop is a true rally vehicle and would smoke the Griffin, but that is comparing apples to oranges.

Go for it. The holiday season is just around the corner. At 40% off on Amazon, the MOTO TC Rally hits the very acceptable price of $59.97! For the speed, quality, working LED lighting system, lap counter, and multiplayer options, it is a category leading product. Of course, it comes with the necessary items to keep you racing, like the charging cable, on-board USB recharged NiMH battery and lap counter. I would also like to take a second and tip my hat on the battery choice. Nickel Metal Hydride batteries are often argued to be superior to Lithium Ion batteries.

The only thing I would like to see is a couple of extra colors. This is quite a picky request, but for the sake of finding a fault, choosing a color scheme would be really cool or children might like to receive a sticker pack to decorate at their choosing.

Keep in mind, there is not a physical tether to the device, but Bluetooth technology works best with line of sight and no more than 30 feet between the two devices. If you adhere to those principals, you will really enjoy the MOTO TC Rally.