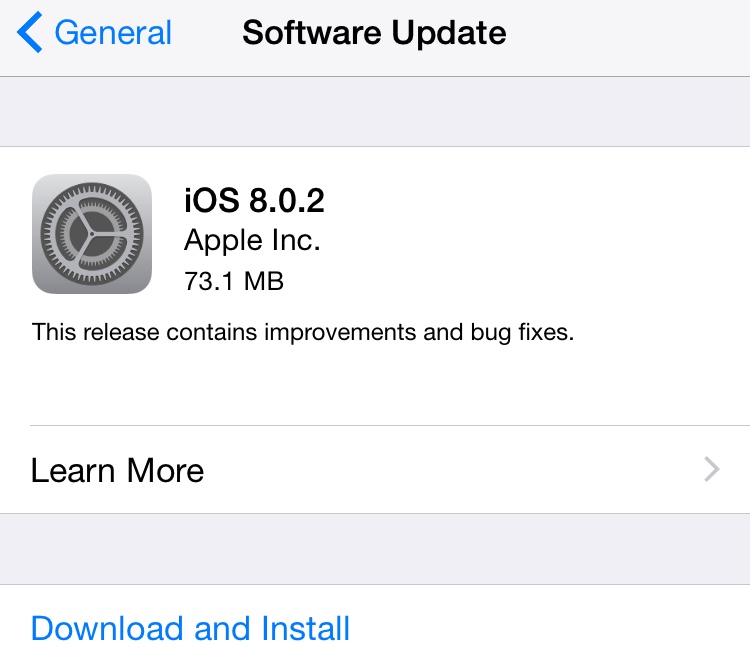 Apple released iOS 8.0.2 to the public Thursday night, addressing issues that iPhone 6 and iPhone 6 Plus users encountered when updating to iOS 8.0.1, as well as several other improvements and bug fixes. The update is available for iPad 2 and newer models, iPhone 4s and newer models, as well as iPod touch 5th generation via an over-the-air update or directly through iTunes.

iOS 8.0.2 fixes a critical issue where iPhone 6 and iPhone 6 Plus users who updated to iOS 8.0.1 on Wednesday lost cellular signal and the ability to use Touch ID. It also addresses a HealthKit bug that prevented apps supporting the new APIs to function properly, as well as several other bugs.

The release of iOS 8.0.1 on Wednesday incapacitated the devices of iPhone 6 and iPhone 6 users who updated immediately. Apple quickly pulled the update but it was already too late for many users who had already updated and lost cell signal as well as the ability to use Touch ID. iDB provided a fix for this, followed by Apple 10 hours later who provided a similar set of instructions and noted the company would release an update rapidly.

Users might feel a little wary about updating to iOS 8.0.2 but we can confirm that we didn’t encounter any issue after updating an iPhone 6.

Hopefully this will ring then end of Apple’s rough week.