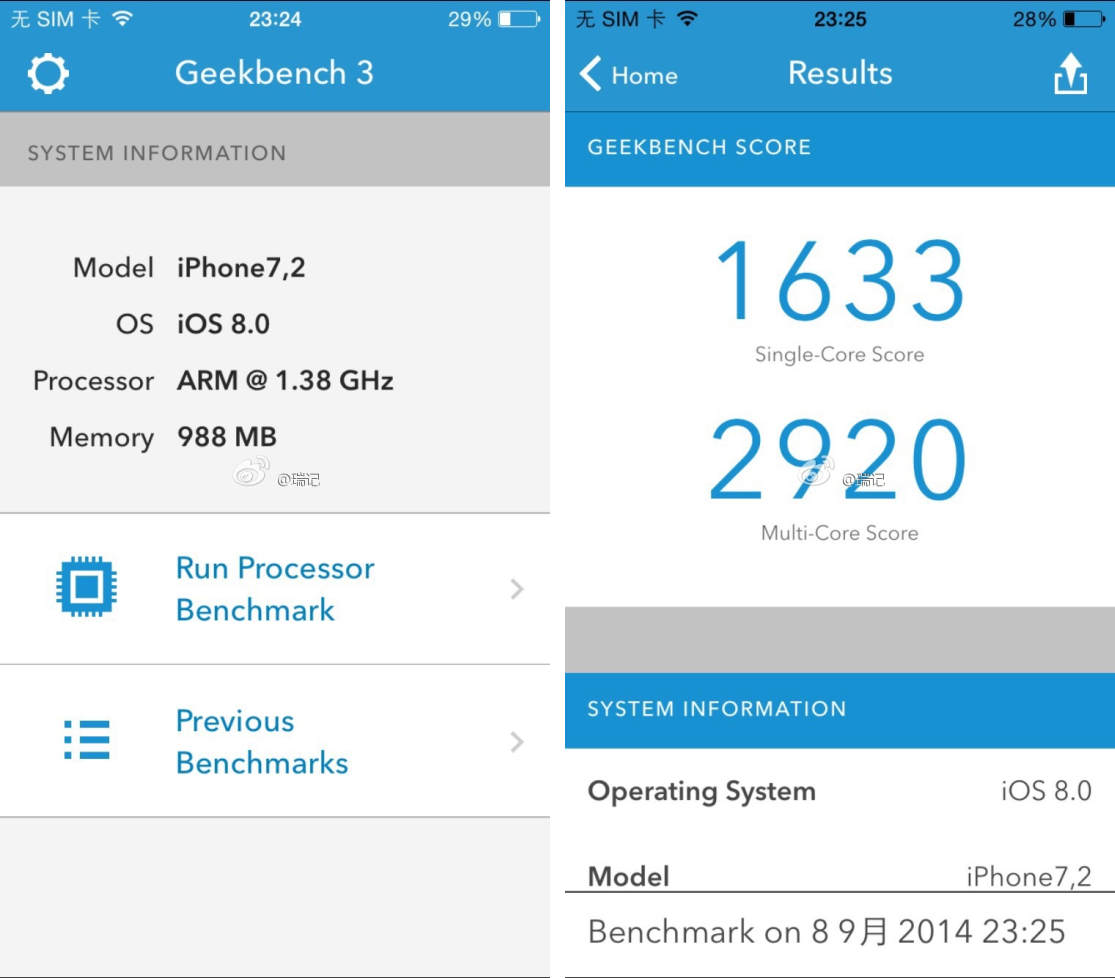 Conveniently timed just ahead of Apple’s big reveal at 10a. PT / 1pm ET, an alleged Geekbench benchmark of Apple’s unreleased iPhone 6 smartphone surfaced online Tuesday morning. The scores suggest that the Apple-designed A8 chip powering the forthcoming handset still has the same 1GB of RAM as prior iPhones.

However, Apple seems to have increased the A8’s clock frequency marginally, going from the 1.3GHz inside the iPhone 5s slightly up to 1.4GHz on the iPhone 6.

Geekbench scores come via the same Weibo user “zzray” who made a video of a nearly-assembled iPhone 6 booting to iOS 8 and running smoothly in spite of its bigger screen with more pixels.

The scores show the assumed device outperforming the iPhone 5s in terms of both single and multi-core CPU speed. Specifically, a score of 1633 was recorded for the single-core test and a 2920 on the multi-core test.

This compares to the 1305 single-core and 2347 dual-core Geekbench 3 scores for Apple’s 1.3GHz A7 processor inside the iPhone 5s.

In his Weibo post [Google Translate] accompanied by a pair of screenshots seen top of post, “zzray” points out that Geekbench identified his devices as an ‘iPhone7,2’ running an ARM-based A8 processor with 1GB of RAM (LPDDR3), clocked at 1.38GHz.

These findings contradict some rumors which claim the A8 rocks 2GB of RAM and four processing cores clocked at two or more GHz each. Let me also bring your attention to the fact that it’s entirely plausible that a variant of the A8 chip bound for a rumored 12.9-inch iPad indeed packs in 2GB of RAM to support the tablet’s rumored split-screen multitasking feature.

The poster also shared the following photo comparison of the iPhone 6’s purported eight-megapixle camera (left) to the iSight camera on the iPhone 5s (middle) and the rear shooter on LG’s G3 handset (right).

Back to the A8 chip.

Even though the current-generation A7 processor is (mostly) the same across the iPhone 5s, iPad Air and iPad mini with Retina display, the iPad Air runs a slightly faster variant clocked at 1.4GHz.

Apple would be wise not to increase the A8’s clock frequency drastically. Not only is the 1.3GHz A7 chip already crazy fast for most uses, but keeping the clock frequency intact would help preserving the handset’s battery life.

For what it’s worth, we heard before that Apple’s semiconductor teams focused on the A8’s power efficiency rather than substantial speed gains. And should the A8 be fabricated on a more modern process technology resulting in smaller transistors (as rumored), expect a lot smaller package overall and reduced power consumption.