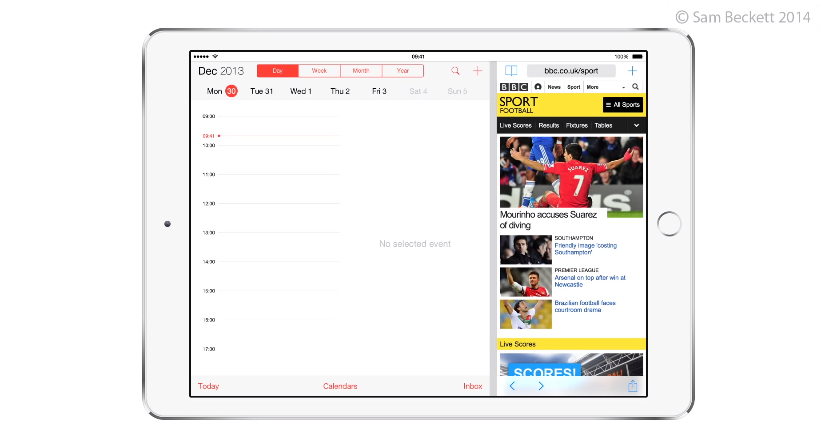 Last month, the well-connected blogger Mark Gurman reported that Apple was likely to introduce a split-screen multitasking feature for iPad on iOS 8. The company did not mention the feature at its WWDC keynote, however, leaving many to wonder if the functionality is still coming. According to a pair of tweets from iOS developer Steven Troughton-Smith, it definitely appears possible…

Troughton-Smith has uncovered code in the iOS 8 SpringBoard, otherwise known as the Home screen, for running two apps side-by-side. He does not specifically mention the iPad, but that is the device this feature would make the most sense on. The developer adds that apps can run in 1/2 size, 1/4 size or 3/4 size. The apps are grouped into one screen on the multitasking menu.

A few weeks after Gurman reported on split-screen multitasking, Brian Chen of The New York Times reported that the feature remains a work in progress, noting that it would not be ready in time for WWDC. That proved to be true, as Apple made no reference to side-by-side app usage on the iPad during its keynote. Whether the feature makes an appearance in a future iOS 8 beta or iOS 8.1 remains to be seen.

Graphic designer Sam Beckett provided us with a first look at what split-screen multitasking could look like in this beautiful concept video. Beckett’s approach involves pairing apps together through the multitasking menu, with a draggable divider for adjusting the split-screen view. The functionality is very smooth, and is definitely something I could envision Apple implementing.

Of course, split-screen multitasking is something that jailbroken iPad users already have the luxury of using thanks to a jailbreak tweak called OS Experience. Our own Jeff Benjamin provided a hands-on look at the extension a few months ago, referring to it as Mission Control for iPad. He said that, despite a strong learning curve, the tweak has lots of functionality and is quite useful.

As it stands, Apple only allows for stock and third-party apps to be viewed in traditional full-screen mode. Microsoft has taken advantage of this shortcoming by mocking the iPad’s inability to use apps side-by-side in recent TV advertisements. The company’s own Surface tablet has featured split-screen multitasking since it was released.

Would you use split-screen multitasking on iPad?