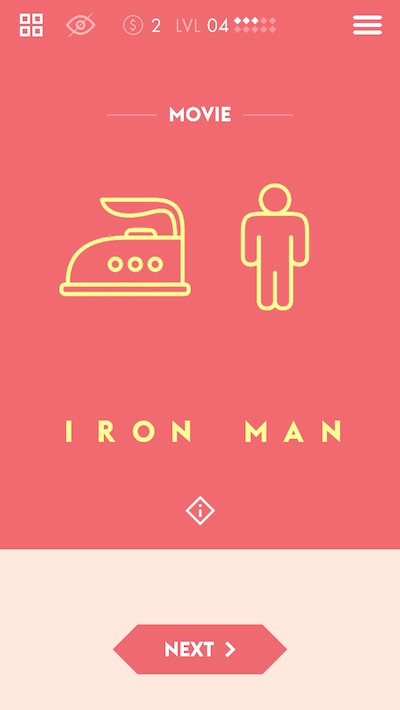 If you are over the age of 21, or maybe even under, you have probably seen those entertaining beer bottle caps with pictograms. My friends and I love trying to figure out what they are. The hardest part is identifying the illustration. Is that a horse, or a dog?

Iconic is a fun pictogram puzzle game that uses minimalist graphics so it isn’t hard to figure out what the illustration is. However, the puzzles might give you a run for your money. We’ve got a hands-on game review of Iconic for you today.

I love the look of this game. It uses muted colors, simple lines, and bold fonts. The design is flat and minimalistic. The idea behind Iconic is that we see a lot of wordless images in our lives. The symbol for man or woman, stop or u-turn, and cut along the dotted line are iconic to many of us. We recognize those symbols immediately because we see them all of the time. The game uses such recognizable graphics alongside categories you don’t normally see them associated with, for example, movie titles or band names.

You will be presented with one or more illustration, listed in order with a set of dots below, which represent the letters in the answer. Directly below that, you’ll have the option to ask Facebook for help, or use a hint. Below that, an assortment of letters is displayed. Every letter that is in the answer is listed, but not every letter that appears will be used. It’s up to you to figure out which ones are, and which ones aren’t. 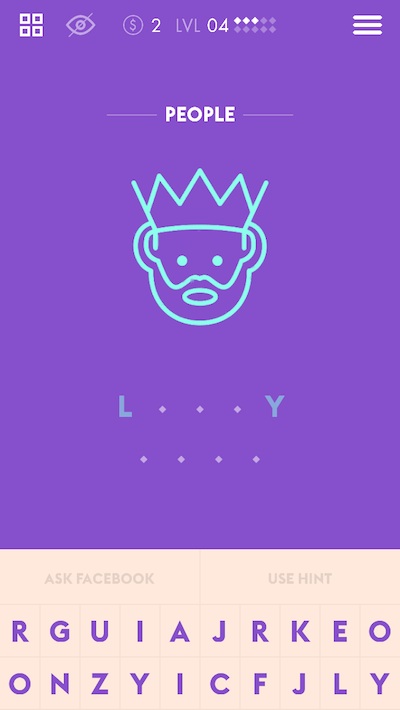 As noted above, you will be presented with a series of illustrations. Depending on the puzzle, it could be as few as one, but could also include more. Your job is to figure out what each illustration represents as a word. For example, one puzzle will include an illustration of an iron and one of a man. The category would be “Movies” and the number of letters would be seven (four and three). The available letters would include the ones needed to solve the puzzle, plus a handful more.

Tap a letter to move it to the puzzle board. When you do, it will disappear from the list of available letters. For example, if you tap T, H, and E, there will be three blank spots below where they used to be on the list.

If you make a mistake, tap the letter on the board and it will move back onto the list. If you make more than one mistake, you can tap all of the letters that were incorrect, but you must add letters in order. For example, if you know that the second word in the puzzle is “man” but you don’t know the first, you can’t add the second word. I would make up the first word and then add the second. Then, I’d tap the letters in the first word that I didn’t know so that the second word would stay up. For example, I might try “Dany Man” and then remove D, A, N, and Y. This helps eliminate letters you know you will use.

For every puzzle you correctly solve, you will earn one coin. Coins are used to buy hints. You can spend 15 coins to expose a letter on the board or remove a couple of letters from the list. For 30 coins you can solve a question. If you run out of coins, you can add more with an in-app purchase.

When you tap “Use Hint” the menu screen will drop down. To go back to the previous screen, drag your finger upward and watch the page fold up and disappear. You can also ask for help on Facebook. When you log in through Iconic and tap “Ask Facebook,” you will be able to post an update that includes the pictogram and the available letters so your friends and family can suggest what they think it is.

If you visit a previous puzzle that you’ve already solved, you can clear the screen and solve it again. When you do, a new information icon will appear and you can read a little tidbit of information about the person, band, or movie.

You will see pop-up advertisements about every 10 puzzles, which can be removed with an in-app purchase, but aren’t obtrusive at all. 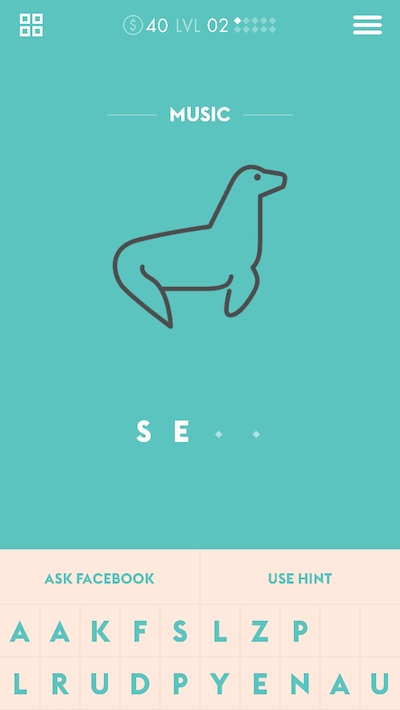 I am a huge fan of word puzzles, so this game is right up my alley. I found that about 70 percent of them were fairly easy to guess and the 30 percent that were difficult had a refreshing challenge.

I especially like the way the app looks. The simple illustrations and smooth user interface are pleasant on the eyes.

I found nothing wrong with this game.

Iconic is free with advertisement support. I practically forgot there were ads in it because they appear so infrequently. However, if they bother you, you can remove them with an in-app purchase of $1.99 or more, which will also yield you at least 250 coins. The replay value isn’t particularly high because you won’t easily forget what the pictogram is when you play it a second time.

This is a fun word puzzle game that will satisfy your craving for a late night Mickey’s beer with friends. The puzzles have enough of a challenge to keep you coming back for more. The replay value isn’t very high, but if you don’t mind the advertisements, you can play the entire game for free. If you like word puzzles, you should give this one a try. Download it in the App Store today.

What’s the Saying is a pictogram style game with similar features. Guess the Icon features illustrations of famous pop culture references that you must identify.

What do you think of Iconic? Let us know in the comments below.