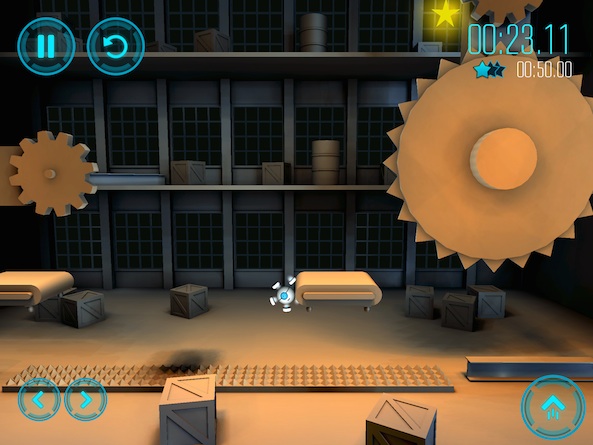 That’s what Pentumble is all about. This little orb has sticky feet all around, allowing it to roll onto any surface, even underneath, without risk of losing its grip. It does however risk getting smashed to bits on spiked gears. We’ve got a hands-on game review of Pentumble for you today.

The game’s graphics are realistic and futuristic. Instead of cartoon illustrations, players are presented with three-dimensional objects that fill an abandoned warehouse. The background is made up of metal girders, wood boxes, spiked platforms, crushing gears, and more.

The main character looks like the offspring of “Wall-E” love interest, Eve. It features five suction cup feet and a glowing blue eye. It moves by rolling along on its suction cups, sticking to everything it touches. The orb can move forward and backward and jump.

Players move the orb using virtual left and right buttons on the left side of the screen and a virtual jump button on the right. Although the controls are simple, this little robot can do a lot of tricks.

The game’s view is side scrolling. However, because of the orb’s abilities, you’ll also be moving up and down to see the action above and below. The camera follows the action from a side view. 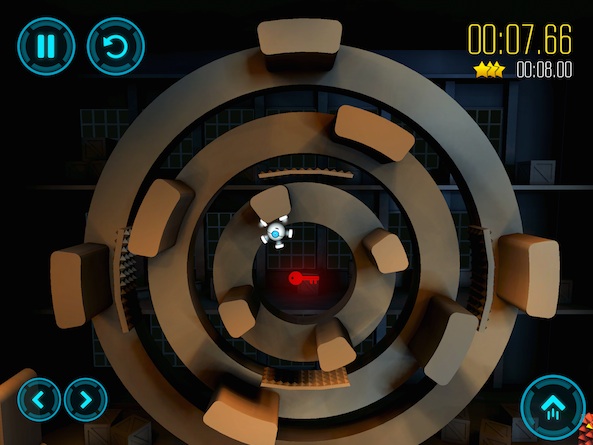 The goal is to get to the exit as fast as possible. If you make it under a certain amount of time, you’ll earn three stars. However, thanks to the plethora of obstacles, it is not very likely you will achieve the top score.

Players move the orb forward and back using the left and right buttons. The robot will roll up walls, climb slopes, and cling to the sides of girders. Tap the button on the right side of the screen to make him jump. But, watch out. He will jump straight in whatever direction he is currently standing. So, if you make him jump while he is on the side of the wall, he will project outward instead of upward.

On each level there are a number of obstacles that keep you from getting to the star on the other side without effort. You may be faced with spiked gears, blocks, and floors. There are also platforms that move vertically and horizontally, and some gears that can be stood on.

Players maneuver through the various obstacles, trying to avoid immediate death. If you touch just one spike, your orb will burst into pieces.

On many levels, players will first need to grab one or more keys that remove spiked blocks that are in the way of something. If you grab a red key, all red spiked blocks will disappear. However, there may also be green blocks somewhere that you’ll need to remove as well.

The goal may be to get from point “A” to point “B,” but you win big when you can do it fast. There is a designated time that earns you a certain number of stars. Earn three stars by completing the level fastest and one star for the slowest. If you don’t manage to complete the level within the slowest amount of time, you can still continue the game, but you won’t get any stars, which are used to unlock new levels. 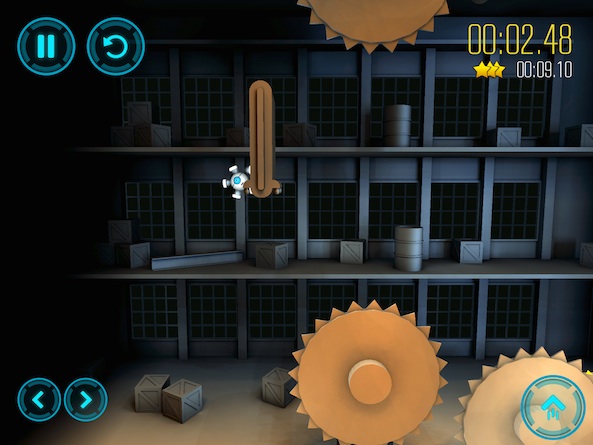 Although fitting nicely into the platform genre, this game stands out for its unique mechanics. Players aren’t constrained by gravity. They are able, and sometimes forced to, travel along the bottom or sides of platforms, making for a much more interesting turn of events.

The game is very hard from early on. By level 10, I found myself having to replay the same section over and over again until I began to get frustrated. This level of challenge is fun, but can sometimes infuriate me. I’d be happy to see a range of difficulty levels so players can have more options.

Pentumble is normally priced at $1.99, which is a great price for a game with so much replay value. However, as of the time of this writing, it is on sale for $0.99, which is even better. The replay value is high since it is nearly impossible to get all three stars on any given level.

If you like platform games, this will give you a run for your money. It is challenging, but fun, looks great, and offers a unique level of gameplay. It is a tick too difficult for my personal taste, but it does make me want to replay levels over and over until I get it right. This game is available on the iPhone, iPad, and iPod touch. You can download it in the App Store today.

Atom Run has a similar graphics concept and level of action but without the wall-crawling feature.

Do you think Pentumble is your kind of game? Let us know in the comments below.