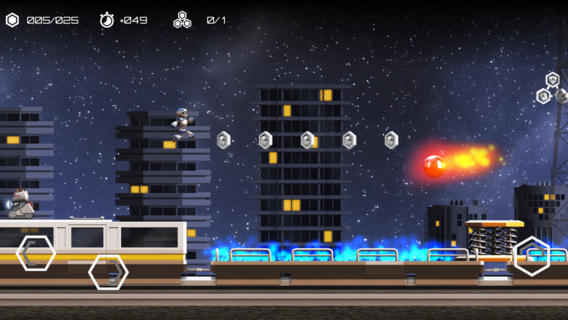 It’s Thursday and you know what that means, don’t you? That’s right, today is the day Apple editors get to pick another paid app to go free for seven days, as part of the App Store’s ongoing Free App of the Week promotion.

This week’s free app is Atom Run by Fingerlab.

Normally costing three bucks a pop, this retro-futuristic platformer set in a mechanical-dynamic environment will be free until next Thursday so best thing you save yourself $2.99 and download Atom Run for free right now…

Released in May 2014, the game has gone free just once, sans this promo.

In sci-fi themed Atom Run, the year is 2264 and you’re Elgo, an agile and acrobatic prototype robot.

Your mission: to find lost molecules and atoms in order to bring back humankind after a terrible disaster wiped every living thing off the face of the planet.

If the storyline sounds like an excuse for collecting power-ups, running, jumping and solving complex puzzles, that’s because it is.

That being said, Atom Run — which has Game Center and iOS joystick support — should keep you occupied for some time, especially if you’re a fan of the genre.

Atom Run is an action-packed retro-futuristic platform game, in a superb mechanical-dynamic world.

Jump, push, run and avoid the many dangers you’ll encounter. Don’t worry about dying – you have infinite lives. You’ll be hooked!

Apple typically attaches some strings to its Free Apps of the Week in the form of the annoying In-App Purchases.

I’m glad to report that Atom Run is a notable exception to the rule: there are no hidden costs and the game won’t constantly ask for cash.

The 78.6-megabyte universal download runs on an iPhone, iPod touch or iPad compatible with iOS 7.0 or later.