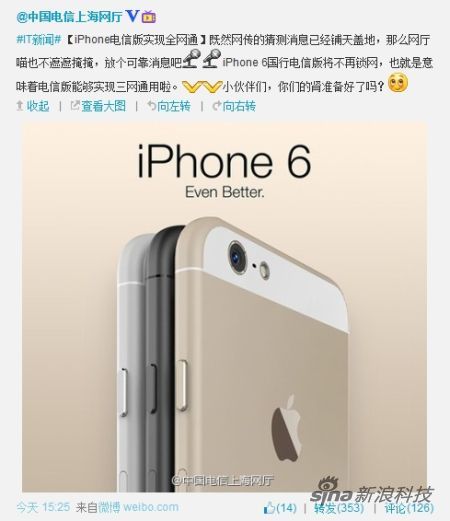 China Telecom has made the claim in a Weibo post which was accompanied by a pair of images based on the familiar iPhone 6 renderings created by Tomas Moyano and Nicolàs Aichino and posted on Bēhance.

The post apparently advertises that an iPhone 6 flavor it plans on selling in the 1.33 billion people market will support all of China’s cellular network standards.

Have a look at the images included after the break and meet us in comments.

This article has been updated with clarification regarding the original source of the renderings.

A Sina news report [Google Translate], via ZDNet, references the carrier’s Weibo post with said images attached to it. Soon after the post blew up on Chinese social media, the carrier, the country’s third-largest, has subsequently removed it.

As you can see, the images envision an iPhone 6 largely as evidenced in the leaks, down to the antenna breaks, the allegedly rounded/thinner design and everything, providing a rendition of the handset in black, silver and gold, just like the current-generation. 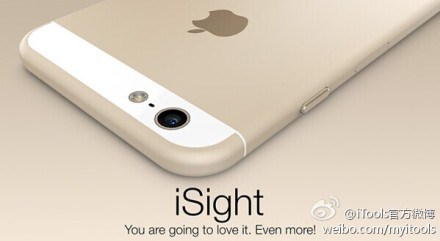 Though current iPhones sold by China Telecom only support its own 3G CDMA2000 network and 2G CDMA network, the carrier said that it will sold the iPhone 6 unlocked, by supporting the SIM cards of rival China Mobile and China Unicom.

This wold mean that China Telecom’s iPhone 6 will work on a wide variety of mobile networks, including dual 4G network — both TDD-LTE and FDD-LTE — as well as support a wide range of additional radio technologies including WCDMA, CDMA2000, GSM and CDMA1X.

In other words, Apple has probably optimized the iPhone’s design by creating a single version of the iPhone 6 for the Chinese market.

A report earlier in the week alleged that the iPhone 6 will support the latest LTE-Advanced standard currently in use in South Korea and being rolled in a limited fashion to select U.S. markets.

Specifically, the handset is thought to support 150 rather than 300Mbps LTE-Advanced networks via Qualcomm’s MDM9625 LTE modem.

So, about those images…

Will you be thrilled or disappointed if that’s what the iPhone 6 turns out to look like?