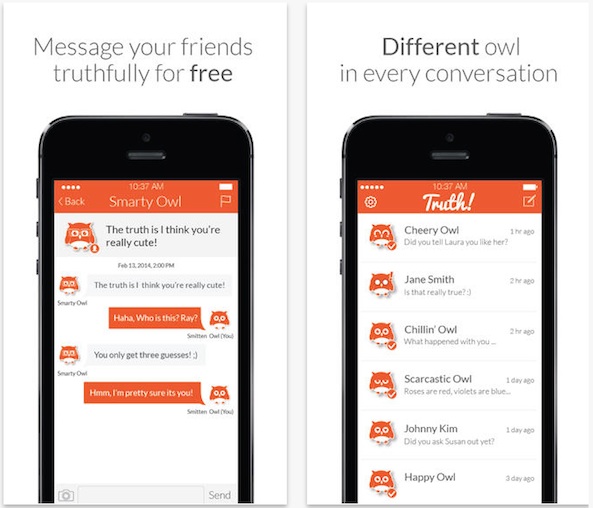 You know that friend you’ve been hanging out with for the past few months? The one you are too shy to ask out? You’ve probably gone home alone after a group get-together, kicking yourself for not pulling that friend aside and asking for a date.

Truth – Just Say It is an anonymous way for you to tell that friend you are interested without having to expose your vulnerability. If you are rejected, your friend won’t even know it was you…

Truth is a messaging app that allows you to send texts to everyone in your contacts list (via their phone number) from an unlisted number so they won’t know it is you until you fess up.

Users sign up with an email address and then confirm their phone number with a four-digit code. Once confirmed, you can start anonymously telling people the truth. 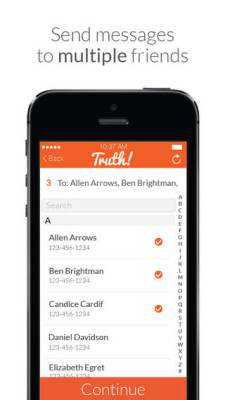 First, select one or more recipients from your contacts list (be sure to allow the app to have permission to access your contacts). Then, send a message. The app has a default beginning to your sentence, “The truth is…” However, you don’t have to use it. You can delete the starter text and write whatever you like.

The recipient or recipients will receive the message from a Bay Area located area code (one I sent was from 510 and another was from 415). They will receive it like a normal text message. It works across all types of devices. I sent one to an iPhone and another to a non-smartphone cell phone.

The recipient can then respond to you three times. After the third time, the person will be asked to download Truth in order to continue the conversation. When the recipient signs up for Truth, the messages will be saved and you’ll be able to chat anonymously. Even after signing up with Truth, you identity is still a secret until you reveal it. 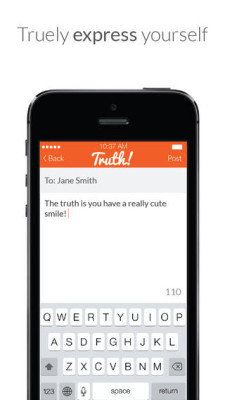 When I discovered this app, the first thing I thought was that it is a great way to bully or harass people. Why would I want to tell the truth to someone without saying who I am? The app’s developer wants this to be fun, not harmful. That’s why you can only send messages to people you have a phone number for. The assumption is that, if you have their number, you probably know them personally.

Of course, it’s not a solid means to keep everyone safe from harassment. However, if you receive a message that you don’t like, you can report the sender to the developers. According to the company’s FAQ page, “We want to create an environment that is fun and non-threatening – your reports help us keep it this way for everyone.” Tap the flag icon in the upper right corner of the app to either block a person or report the message. Unfortunately, there isn’t such an easy way to report a Truth user to the developer if you aren’t registered with the service.

Truth is available for free. You can download it in the App Store today.

What do you think of this app? Would you use it to tell someone the truth, anonymously?