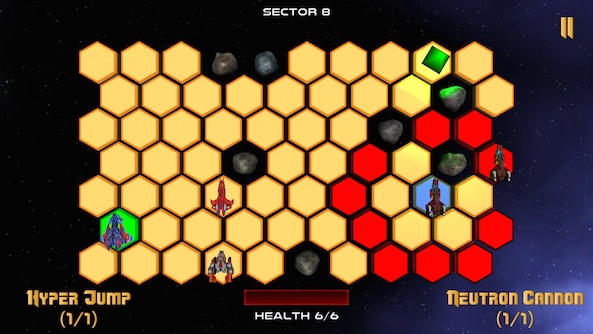 I am a sucker for a turn-based strategy game. They can be great time wasters. I love planning my move, setting up my men, and hitting hard with a great attack.

Assault Vector is a turn-based strategy game where players must be ready for attack from all angles. Plan your attack before your enemy gets you cornered. We took it for a spin and have a full review of Assault Vector for you below…

The game is set deep in outer space on the edge of a molten planet (or possibly an asteroid). The gameplay takes place on a honeycomb grid that changes every time you start a new sector. Grids are procedurally generated, so no two games will every feel the same.

Your ship is blue and red while the enemy’s ships are mostly red. Don’t worry, you can tell the good guys from the bad, especially because you are the only good guy out in this space wasteland.

You have one Hyper Jump per sector, which starts out letting you jump over one space, but can be upgraded every time you complete a sector. You also have one Neutron Cannon, which has limited range, but can also be upgraded after each sector.

You move your ship around on the grid by tapping the space you wish to move. Players can only move one space per turn. Then, you wait for the enemy to move. If you plan your strategy well, you’ll destroy them before they destroy you.

There are always multiple enemy ships on each level, but only one of you. The good news is that you can kill them with one shot, while it takes them at least three to bring you down. Your health can also be upgraded between sectors. 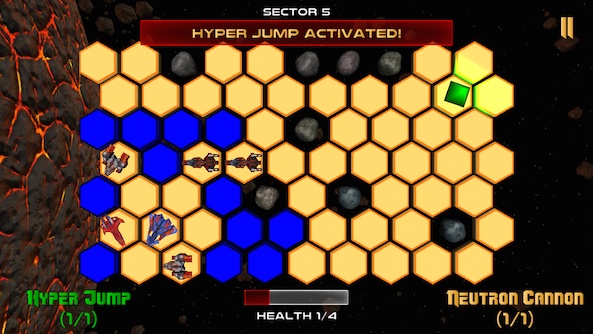 Players start with a quick tutorial that explains how to move, shoot, and win. When you go to the first sector, you’ll be on your own against two enemies. Since the levels are procedurally generated, the type of ship and layout of the grid will be different each time.

The enemy ships have three different firing ranges. One can fire horizontally, one can fire diagonally, and one can fire into a spot that is one move away from his ship in a circle. Unless you are using a Neutron Cannon, you can only fire one space in front of you, but in any direction.

To fire on an enemy, move into range. Your ship will automatically fire on any and all enemies within range as long as you didn’t move into theirs. If you move into the range of fire of an enemy ship, you won’t be able to fire, but the enemy will instead fire at you.

It is important to keep track of the range of each ship on the board so you don’t accidentally move into the enemy’s line of fire. For example, if one ship with a diagonal range is only one space away from you, you could move in for the kill. However, if another ship with a horizontal attack were a few spaces away, but within firing range, you would be shot at instead. Tap the enemy ships to see their range.

Your Neutron Cannon will be very useful in situations where groups of enemies have surrounded you. You can pick one off from a far in order to clear out an area to move into. The Hyper Jump is just as effective. At first, you can only skip one space with Hyper Jump. However, after upgrading your ship, the range grows infinitely wider until you can virtually jump across the entire field.

Upgrades disappear when you die. If you lose all of your health, you’ll start back at Sector 1 with limited range and only three health.

There is a second way to get through a sector. I like to call it “chickening out.” There is a green, glowing portal on the field that, if you make it to, will transport you to the next level. However, you won’t earn any upgrades by doing so. If you have full Hyper Jump, you could essentially jump from your starting point, all the way to the exit portal in one move. But, then I’d probably call you a chicken. 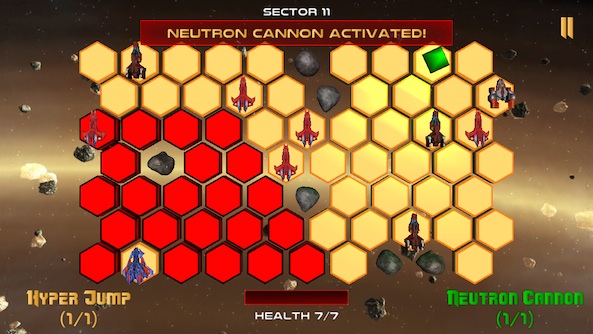 This game is a lot of fun. Although it is a turn-based strategy game, it plays almost like an arcade game. You can’t plan ahead too far because you don’t know what your enemy will do next. Each turn is a gamble to situate yourself in the right spot for an attack.

The game desperately needs multiplayer mode. It would be lots of fun to play against friends and strangers in a turn-based match.

The AI is not particularly intelligent. Once you get past Sector 5, it doesn’t really get any harder, other than more ships to contend with. The overabundance of upgrades practically makes you godlike by the time you’ve played a dozen levels. I’d like to see a few changes with how easy upgrades come and how smart enemies are.

Assault Vector costs $1.99. Honestly, it feels more like a $0.99 game in its current state. Hopefully, the developer has new features in the works for the future because this could potentially be a huge hit with just a few tweaks. As it is, the game is incredibly fun and has a super high replay value.

Although the game is a bit pricier than it should be, I had a lot of fun playing and think it is worth the cost. With a few features, like multiplayer mode and a more complex strategy of AI opponents, this could be a super hit. If you are looking for a turn-based strategy game with an arcade feel, give it a spin. This game is available on the iPhone, iPad, and iPod touch. Download it in the App Store today.

Neuroshima Hex Puzzle is a turn-based strategy game with a mecha theme. Great Big War Game is set on Earth, but requires some serious strategizing.

What do you think of Assault Vector? Let us know in the comments below.