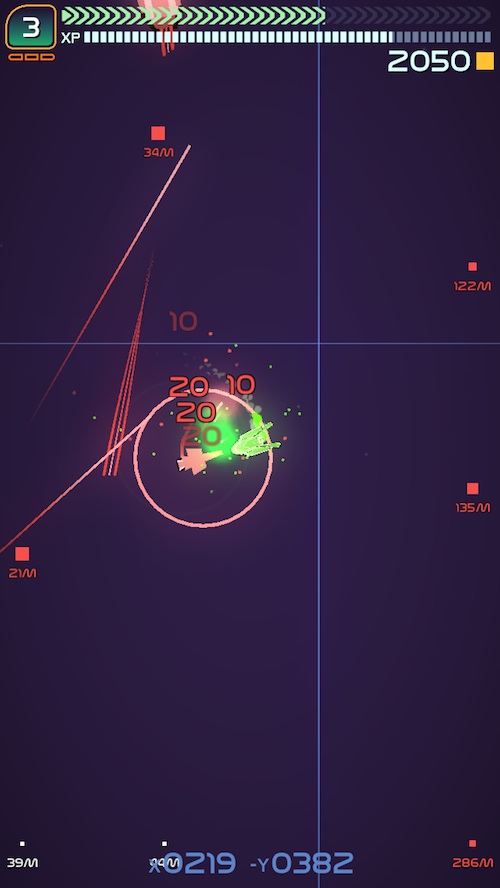 Space-based shoot-em-up games are a dime-a-dozen and as fun as can be. I love heading out in my virtual ship and pew, pew-ing everything that moves. No mining, no building relationships with other worlds. Just shootin’ and flyin’ for me.

Space Colors is a shoot-em-up style space game where players must follow mini missions in order to earn points and collect credits. Fly through space in a colorful adventure across the galaxy. Check out our game review of Space Colors below…

The game has a retro feel to it. The ships and surrounding asteroids use geometric style graphics. Everything has an arcade space game atmosphere. Your ship flies on an XY grid with your current location displayed at the bottom of the screen.

You fly around in a weaponized green ship, trailing some kind of dust cloud behind you as you move. Surrounding asteroids are viewable in a, sort of, heads-up display with their distance from you labeled. Tap the screen in the direction you want to go to start moving. When you get to your destination, be it an asteroid, a fighter ship, or a turret, you’ll be able to attack simply by tapping the target. Your ship will fire automatically, and you can continue moving while shooting, so you can stay out of range of the explosion that will inevitably take place.

At the top of the screen, you will see your health meter in green followed by your experience points below. Your credit count is displayed in the upper right corner of the screen. The current mission is typed out below the XP bar.

On each planet, you will be required to complete one mission. Sometimes, the mission is as simple as picking up a crate or flying to a location. Other times, the mission is nearly impossible, like destroying a fully loaded space turret that is surrounded by dozens of enemy fighters.

If you die, you must start over again, but you get to keep the credits you’ve earned and any upgrades you’ve made to your ship. 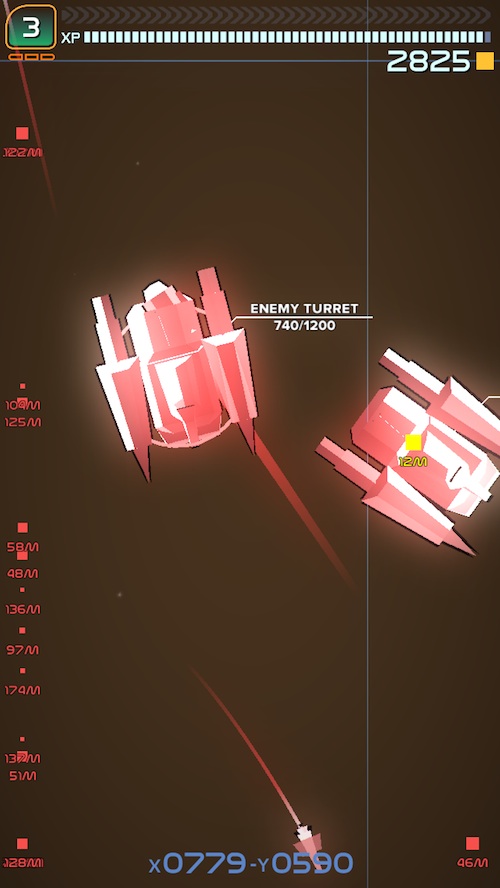 The game puts you in the midst of a randomly generated galaxy. Each galaxy has a number of worlds, but they are not in any kind of order and you don’t have to start at the beginning. You have access to all planets in the galaxy and can choose to either launch the mission or pick something else.

The missions are also randomly generated, so no matter which galaxy you start in or which planet you launch near, your mission and the inhabitants will be different.

Players start by tapping a planet to zoom into it. The world’s name and a sentence about it will appear. The game incorporates a bit of humor at this point because the data will say something like “Known to be hurty” or “Definitely not a black hole.”

Tap “Launch” to begin the mission. Your ship will appear next to a space station that has already begun destroying nearby asteroids for you. Collect any credits that are left behind and head off on your mission. The task will appear below your XP bar and a yellow destination marker will appear on the screen, pointing you in the right direction. Tap the screen in that direction to head toward whatever you are supposed to meet up with.

Some missions are to destroy a certain number of asteroids or fighter ships. Other missions are to blow up a carrier or turret. Depending on your mission, it will either be cakewalk, or nearly impossible. The fun is in blowing things up along the way.

You will earn experience points for everything you shoot. XP unlocks upgrades for your ship, so be sure to hit a couple of asteroids on the way to that turret. Destroying things is also good for increasing your credits, which are used to purchase those upgrades. You can’t use real money to buy them, either. It all depends on your ability to blow stuff up.

When you die, and you will, you will be able to “Begin Anew” and start a new series of missions. However, you won’t loose your goodies, and it’s not like the worlds populate in a particular order, so it isn’t disheartening to have to start over. 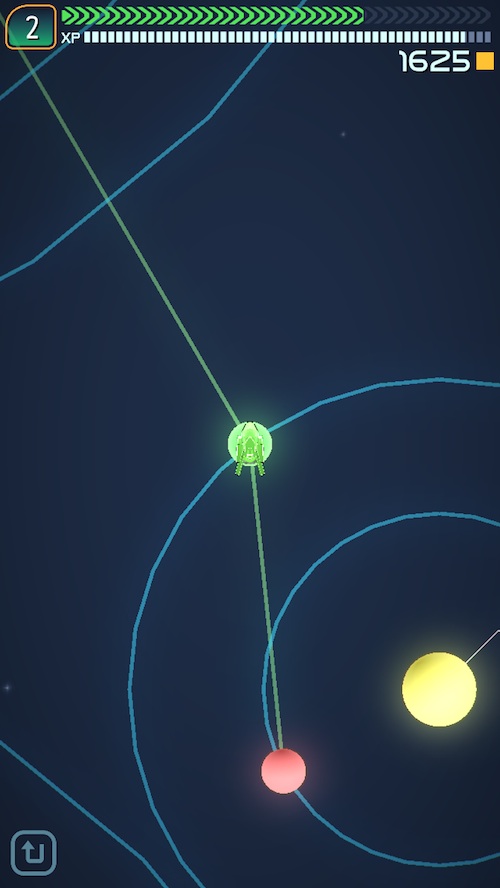 This game is tons of fun for its simplicity and arcade action. All you have to do is fight, pick up stuff, and fight some more. It is a great game for passing a few minutes while you take a break. The exciting action gives you something to do when you hit that mid-afternoon slump.

There is no tutorial. I didn’t find this to be an issue at all because it is incredibly easy to figure out what to do. However, some may find that to be annoying.

Space Colors costs $0.99. That is the perfect price for a game like this. Plus, since the levels, bad guys, and missions are randomly generated, no two games are ever alike. You’ll be blasting through the universe over and over again.

I highly recommend this game for fans of arcade action shoot-em-up style games. It is especially fun since you never know what to expect from one level to another and those explosions are pretty colorful. This game is available on the iPhone, iPad, and iPod touch. Download it in the App Store today.

This game actually reminds me of the classic arcade game Asteroids, which you can find within Atari’s Greatest Hits.

What do you think of Space Colors? Let us know in the comments below.