Apple has posted two new stories to its ongoing ‘Your Verse’ iPad campaign this weekend: one featuring electropop group Yaoband, and one with Jason Hall, the founder of the Slow Roll biking program in Detroit.

Like previous Your Verse spots, the stories answer the question posed in Apple’s ‘What Will Your Verse Be‘ advert. The running theme is that the iPad can be used for much more than gaming and consuming media…

Yaoband consists of Luke Wang and Peter Feng, two Chinese musicians with an innovative sound. In their spot, the pair are seen using their iPads to capture, record and perform their music using a variety of apps.

Long before they played together, Luke Wang and Peter Feng produced tracks for some of China’s biggest artists. While professionally successful, they felt their creative vision was stifled. “We wanted to bring a new kind of music to Chinese music fans,” says Luke Wang. So they formed Yaoband to explore this new sound.

Inspired by the pulse of life in modern China, they started by capturing audio samples with iPad and turning them into progressive beats. Nothing was sacred as they flowed in and out of musical genres, mixing electronica with rock, rap, and traditional Chinese songs. “We were just like scientists in a lab, trying many formulas,” says Peter. “Every single song was a surprise, because it was always better than I imagined.”

Here’s the ad, and you can read the rest of the story here. 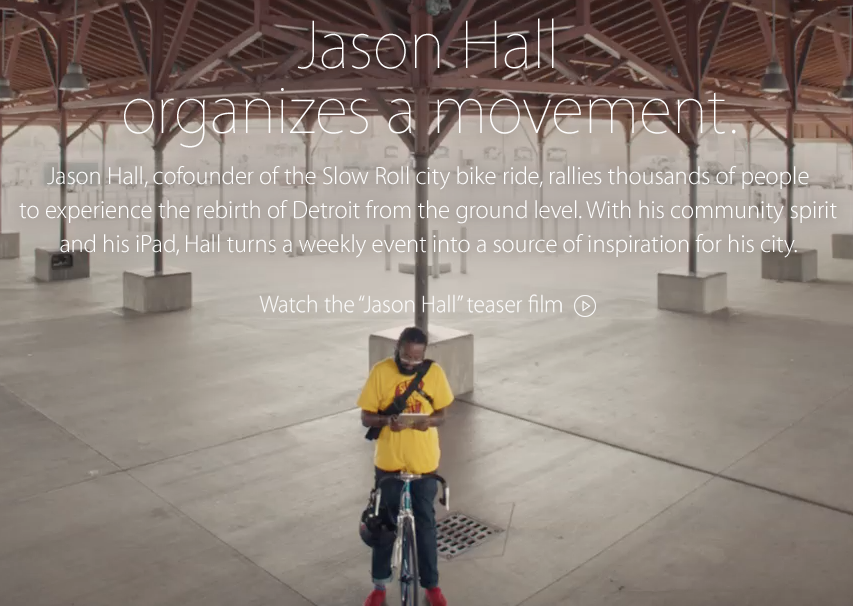 Jason Hall is the cofounder of Slow Roll, a large bike ride that occurs every Monday in Detroit an can attract thousands of people. Hall uses his iPad to organize the event, plan routes, check the weather, and more.

It takes heart to live in Detroit. Locals are quick to acknowledge their city’s challenges, and Jason Hall was no different. “I was feeling a bit beaten down by this city,” he says. But everything changed when a friend suggested he do the simplest thing: Take a bike ride to clear his head. “I got out and started to see Detroit in a different way,” he says. “On the ground level, you see the potential that exists. The city’s wide open for new ideas.”

After that eye-opening ride, Hall had an idea of his own. “I wanted to convince other people to see Detroit the way I was seeing it,” he says. “The plan was, let’s start a bike ride and see if people want to go with us.”

It began simply enough. Just 10 friends on a Monday night ride. Soon it was 20. Then 30. In its second year, the ride grew from 130 to 300 cyclists in two weeks. As the numbers increased, Hall turned to his iPad and made it the command center for all things Slow Roll. “We use it for everything we do, from mapping to communicating to ordering new T-shirts,” he says.

Here’s the ad, and you can read the rest of the story here.

Both stories are fascinating and well worth checking out. It’s also interesting to see how different Apple’s approach to marketing its tablet is, versus other companies. You can see Microsoft’s latest Surface ads here.