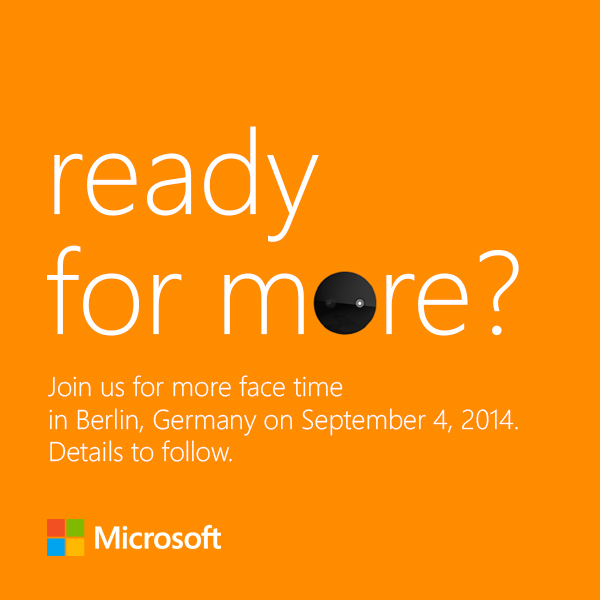 Apple’s chief rival Samsung has already blocked out a Galaxy Note 4 related slot at the upcoming IFA trade show for consumer electronics in Berlin, Germany and now software giant Microsoft has sent out invites for an IFA event of its own.

It’s scheduled for Thursday, September 4, and we’re expecting some nice new Lumias with major upgrades in the camera department — and maybe even a rumored Lumia ‘selfie’ phone. Photography and camera performance have always been the hallmarks of Nokia’s design.

High-end Lumias such as the 41-megapixel Lumia 1020 are widely recognized and regarded as the best smartphones for mobile photography. But mobile photography is just as important to Apple so it’ll be interesting seeing what new hardware and software features are Microsoft and Nokia have in tow…

The invite graphics, shared by TMoNews, features orange background with a line inviting journalists to “join us for more face time in Berlin, Germany on September 4, 2014,” noting that details will follow.

In addition to Samsung (September 3) and Microsoft (September 4), Apple is widely expected to host a major media event of its own in California on Tuesday, September 9 to unveil the iPhone 6.

The ‘face time’ reference along with the not-so-subtle use of camera graphics in the ‘more’ could signal at a brand new Lumia device(s) coming with a strong focus on taking selfies. At any rate, seems like a successor to the Lumia 1020 is looming on the horizon.

As seen in the video below, it’s capable of drastically smoothing out shaky videos by applying an algorithm that can reconstruct the 3D path of the camera and stitch/blend individual frames to time-lapse videos with a smoothly moving camera.

This should make wonders for shaky GoPro clips captured with a helmet camera during activities such as rock climbing or bicycling. For a more technical explanation of Hyperlapse technology, watch this video.

Traditionally, device vendors have not paid much attention to front-facing camera modules. The advent of video conferencing on the go — mainstreamed by the 2010 iPhone 4 introduction — has changed the perception that phones don’t need full HD front cameras.

And with the advent of a global phenomenon that self-portrait photography has become, more and more people want to take sharp self-portraits that don’t compromise image quality, color vibrancy and resolution.

If a February 2014 story by Nikkei Asian Review is correct, Sony could replace OmniVision as a FaceTime camera supplier for 2015 iPhones, helping advance self-photography on future iPhones. 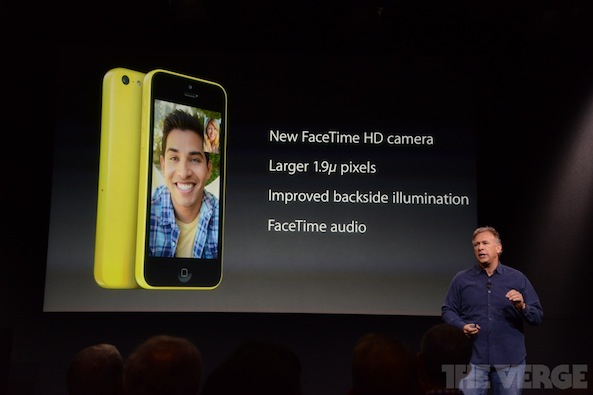 Sony already supplies CMOS modules for the iPhone’s back camera called iSight and is rumored to provide 13-megapixel Exmor IMX220 camera sensor for the iPhone 6.

As you know, the current-generation iPhone 5s features a 720p FaceTime camera although high-end Android devices typically have front cameras that allow for  1080p video conferencing. I think no one can deny that iPhones disappoint in terms of the quality of photos taken with the FaceTime camera.

Your iPhone 5s, for example, can only take 1.2-megapixel images with the front-facing camera. For those wondering, that’s 1,280-by-960 photos — hardly satisfactory by today’s mobile photography standards.

How important is iPhone 6’s FaceTime camera to you and what improvements are you expecting?